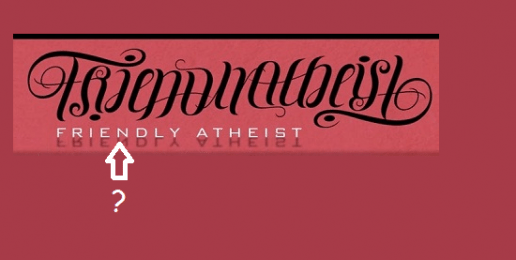 District 204 parents really should spend some time perusing Neuqua Valley math teacher, Hemant Mehta‘s website to determine whether he is the kind of man with whom they want their children to spend a school year. He absolutely has a First Amendment right to promote any feckless, destructive, offensive, and immoral ideas he wants via his blog, but, as I mentioned in my earlier article, parents have the right not to have him as a teacher and a role model for their children. I want to be very clear about what I’m suggesting: I am suggesting that parents who have serious concerns about Mr. Mehta’s potential influence on their children’s beliefs politely insist that their children be placed in another teacher’s class.

On his blog on August 18, he seems to suggest that Christians who publicly read passages from the Bible that he doesn’t like should be charged with hate crimes. He wrote as follows:

If you stood out on a street corner and started saying that gay people should be killed or made racially-charged remarks about slavery, it would be considered hate speech and you could be arrested.

In the UK, however, Miguel Hayworth and father John Hayworth are facing arrest for doing just that… but they say they are being treated unfairly. All they were doing is preaching what the Bible says.

I don’t know if they were preaching the following verses, but no doubt they serve as examples of some awful passages:

If a man lies with a man as one lies with a woman, both of them have done what is detestable. They must be put to death; their blood will be on their own heads. (Lev. 20:13)

If a man beats his male or female slave with a rod and the slave dies as a direct result, he must be punished, but he is not to be punished if the slave gets up after a day or two, since the slave is his property. (Ex. 21:20-21)

Christians can make an argument that these passages need to be read in context to be properly understood and that these words say nothing about what God supports or condemns, but it’s a hard sell since Christians habitually take verses out of context to suit their own needs.

Chief Inspector Chris Hill, of Greater Manchester Police, said: “Police were called to St Ann’s Square in Manchester city centre following complaints from members of the public who considered the comments being made by two street preachers as racist and homophobic. When spoken to, the men said they were quoting from the Bible. The officers confirmed they were entitled to preach on the street, but advised them offensive behaviour is not acceptable.

They haven’t been arrested. Yet.

This is not a violation of free speech. Even that has its limitations.

I wonder if the cops would’ve arrested the Hayworths if they screamed “fire” in a crowded theater because the Bible told them to.

Where do you draw the line?

“Ask Richard: Considering an Ultimatum to Her Intolerant Family”

I’m in a polyamorous relationship. I’ve been married to my husband for almost four years, and for the past three, we’ve had a live-in boyfriend. At this point in our relationship, we consider all three of us to be equals — the marriage between me and my husband is no more or less binding or meaningful as our relationship with my boyfriend. The three of us are best friends — more than best friends, we’re family. We’re all in our mid-twenties, and we all have college degrees and complete financial independence from our parents.

When we told my family (evangelical fundamentalists), they took it horribly. My parents were furious that I’d told my siblings (who are younger than me, but 18 and up) and compared our situation to pedophilia. When pressed, they admitted that our situation isn’t illegal, it’s just “unethical.” One of my siblings hasn’t been in contact with me for months now, having cut me off immediately after getting my letter. The rest of my family has handled this the same way they handled finding out about my atheism — they just avoid the topic. As long as no one brings up my boyfriend’s existence, they’re happy to keep making small talk and sharing family news.

I don’t want to allow them to keep pretending like this forever, and I think that at some point, I’m going to tell them that they’ll have to choose between being dicks about this and having me in their lives — and having me in their lives means acknowledging the existence of my boyfriend and treating him like part of the family. I do know, however, that they need some time to adjust and get used to the situation, so I’ve decided to give them a year before I do this.

So: Should I tell my family now that I’ll eventually expect this from them? I think that they’re assuming that we can go the rest of our lives the way we’ve been acting, and I don’t want to shock them by suddenly springing an ultimatum on them a year from now. On the other hand, I’m afraid to broach the subject at all, when things have been relatively pleasant, and I’m not looking forward to the emotional upheaval of another angry, negative reaction from them. Any advice you have would be greatly appreciated.

I can understand your frustration and hurt. Your family’s behavior says that they don’t respect you or your loved ones. It says that their moral rules trump their love for you. Sitting around at family gatherings pretending that your boyfriend doesn’t exist is an immature way to respond. I gather from your letter that they have not even met him.

I see three possible ways you could handle this. One, you could continue to go along with the charade, playing your family’s game and never bring your boyfriend over to their home or mention his name.

I suggest . . . gradual engagement. Your family has responded in a less than mature way, but they could have done worse, by issuing you their own ultimatum and when you refused, consequently cutting you off. You still have contact with them, still have your foot in the door. Take advantage of it. What I suggest will take quite some time, and it will require higher levels of patience and maturity than you may have ever mustered before. You are worth that effort, and so are your husband, your boyfriend, and yes, even your family. . . .

Begin working on one family member only, whoever is most likely to be willing to just listen to you. The following may take several separate sessions: Privately, talk to that person about your hurt feelings from your sibling’s abandonment of you, and from the others’ decision to pretend and ignore someone who is very important to you. Avoid expressing your anger and indignation, which are secondary to your root feeling, hurt. Faced with anger, people will immediately defend or counter-attack. Just express your hurt. As I discussed in a previous post, frequently say that you love him/her. As he or she begins to understand how you feel, start introducing your boyfriend in small increments. First just show a picture of him. Later, briefly describe a few things about him, including both something that he does, and something that he feels. Gradually make your boyfriend a real human being in this family member’s eyes. Eventually arrange a casual meeting with him away from the family home. Hopefully, you will begin to have one family member who is more interested in supporting your happiness than in doggedly supporting a family consensus. Then s/he can work with you in an incremental way on the next person, whoever would be the second most open to listening, and then the next…

I think that you’re much more likely to gain more allies in your family, and you will have gently rather than forcibly broken up the monolithic rejection of your chosen relationships to the point that your boyfriend will be able to attend gatherings, and people will be able to relax without pretending that he doesn’t exist.

Poly, I know that this and many of my suggestions to other people’s problems are a lot of work. Doing the quick and brutal solutions instead can be very tempting, but atheists do not just have the advantage of rationality and emotional maturity on their side in a debate, they also have the responsibility to live by those qualities in their daily lives. We must rise to the challenge of our choice to be self-defining and self-responsible. . . .

Although Mr. Mehta did not write this blog entry, judging from the fact that he has several posts that endorse polyamory and none that criticize it, it seems clear that he shares Wade’s subversive views.

And finally, there’s the blog entry in which Mr. Mehta cheerfully encourages his readers to visit the obscene column of homosexual activist Dan Savage who urges a young man to act upon the same-sex attractions he is struggling to resist because of his faith. Here’s an excerpt from the Savage column that Hemant Mehta recommends on his blog:

[J]ust remind yourself that things have been crawling on top of each other and madly humping away for 850 million years. Sex came first, then humanity (200,000ish years ago), then religion came along tens of thousands of years after that. Which may explain why religion, when pitted against sex (really old) and human nature (pretty old), always loses. Always.

If you’re on the cross, it’s because you put yourself up there. Which means you’re not some poor mortal trapped between a cosmic rock and an existential hard place; you’re just another closeted co**sucker with a martyr complex.

Look, kiddo, you get one life, one chance at happiness. If it gives you a spiritual semi to fantasize about a God who created you gay but forbids you to act on your emotional and sexual attraction to men, knock your damn self out. But you can have a boyfriend and Jesus, too–look at the pope–you just have to do what people have been doing since the first terrified idiot invented the first bullshit religion: improvise. Find yourself a brand-new religion or sect, or jettison the bits of your current faith that don’t work for you. If you know anything about the history of Christianity-and it sounds like you don’t-then you know that the revisions began before the body was cold. No reason to stop now.

And finally, there is no God–you do realize that, right? No hell below us, above us only sky, etc.

It’s astonishing to me that a teacher, someone who is supposed to be a role model for students, would ever recommend that anyone visit Dan Savage’s offensive column.

Some parents fail to understand the adolescent mind: they fail to understand that teens are often predisposed to affirm the ideas of adults whom they find cool or personable or funny or anti-tradition. Those parents, no matter what their personal beliefs, will likely be comfortable with their children in Mr. Mehta’s class.

Some parents may be ideological kindred spirits with Mr. Mehta. Those parents may relish the idea of their children being impressed by Mr. Mehta and influenced by his subversive ideas.

But those parents who are troublied by the ideas Mr. Mehta expresses, posts on his blog, and endorses, and who recognize that their teens may be predisposed to look favorably on his ideas merely because they like him, may want to ensure their teens have another math teacher.

It’s all about diversity and choice.