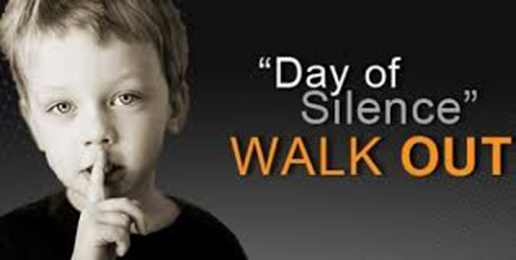 The upcoming National Day of Silence (DOS) On Friday, April 15, organized and promoted by the extreme leftist Gay, Lesbian and Straight Education Network (GLSEN), urges students to refuse to speak for an entire school day including during class. The stated purpose of DOS is to encourage sympathy and support for students involved in homosexual and cross-dressing behaviors whose voices have been allegedly silenced by the disapproval of society. The unstated purpose is to undermine the true belief that homosexuality and cross-dressing (as well as quackish chemical and surgical interventions) are immoral. Parents should no longer passively countenance the political usurpation of public school classrooms through student silence.

Some school administrators assert that DOS merely seeks to promote “acceptance.” They fail to clarify, however, precisely what they want students to accept. While it is legitimate to teach students that there exist diverse opinions on the issues of homosexuality and gender dysphoria, it is not legitimate for an arm of the government to imply that one set of opinions is preferable to another. While it is appropriate to teach acceptance of people, meaning that we should treat all with civility, it is not appropriate to suggest that students should accept one set of beliefs about homosexuality and gender dysphoria and reject the other. One can accept persons while rejecting their beliefs, desires, and life choices. These important distinctions are never made in public school discussions of “acceptance.”

Another oft-repeated mantra is that the goal of DOS is to keep “LGBTQ” students safe—a goal all decent people share. The rhetoric of “safety,” however, substitutes speciously for the more accurate term of “comfort.” To suggest that in order for those who self-identify as homosexual (or “transgender”) to be “safe,” no one may disapprove of homosexual conduct is both absurd and dangerous. If this understanding of “safety” were to be applied consistently, all statements of disapproval of any behavior would be prohibited.

If conservative parents, teachers, and administrators do not actively oppose the disruption of instructional time by DOS, it will metastasize from our high schools into our middle schools and then into elementary schools. Increasing numbers of students will participate, and increasing numbers of teachers who view themselves as “agents of change” will participate, emboldened by the ignorance and cowardice of colleagues, administrators, school board members, and parents.

Don’t believe me? Well, take a gander at how one middle school in New York—coming up on its fifth year of participation—has been celebrating DOS: Click HERE.

Worse still, some schools devote an entire week to promoting the normalization of homosexuality, culminating on Friday’s Day of Silence. While schools can no longer acknowledge Christmas, they may spend valuable class time celebrating life-destroying homosexuality, all the while misrepresenting it to gullible parents as an bullying-prevention effort.

Unfortunately, not even our private religious schools are exempt from the intrusive efforts of GLSEN. Last year five Dominican Sisters of Mary, Mother of the Eucharist nuns at Marin Catholic High School near San Francisco walked out of their classes to protest the intrusion of GLSEN through the Day of Silence.

The nuns were uncomfortable that GLSEN materials, which espouse positions that conflict with Catholic teaching, were being distributed to students on school grounds. Those who naively believe DOS is solely about bullying with no connection to conservative moral beliefs should peruse GLSEN resources, one of which identified “a house of worship that teaches homosexuality is a sin” as an example of oppression. In GLSEN’s perverse moral universe, churches are places of oppression, and oppressors are bullies. Eliminating bullying requires eradicating biblical beliefs about homosexuality.

The nuns were also troubled when they learned that “students were feeling pressured to accept and wear stickers” produced and distributed by GLSEN.

Some dismiss the Day of Silence by claiming that there is only a small group of students who participate in it in their school, or that it’s only a few teachers. But does that matter? Would parents tolerate school administrations permitting a group of students to refuse to speak in class in support of consensual adult incest, promiscuity, polyamory, sadomasochism, or racism as long as the protesters were few in number?

For school administrations to permit student silence in class for DOS necessarily means they have come to prior conclusions about the nature and morality of homoerotic activity and relationships. How do I know this? Well, imagine there were a small group of students who identified as promiscuous or polyamorous and were bullied for their promiscuity or polyamory. Would any school administration permit a DOS during which promiscuity and polyamory were treated exactly as homosexuality and “transgenderism” are treated? Surely, neither school administrators nor teachers want promiscuous or polyamorous students bullied. Surely they want to create a “safe” space for them. So, what’s the difference?

The difference is school administrations know that the DOS doesn’t merely work to curb bullying. They know it has the effect (intended effect) of undermining disapproval of homosexuality and cross-dressing, but that’s okay because they have concluded that homoerotic feelings are 100 percent heritable, immutable in all cases, and that acting on them is intrinsically moral. School administrators have come to different moral conclusions, however, with regard to promiscuity or polyamory, and they realize that a DOS for promiscuity and polyamory would not merely end bullying but undermine moral disapproval of both—which they wouldn’t want to do. They would seek other means to curb bullying of promiscuous and polyamorous students.

Please muster the little courage it takes to email your middle and high school administrators and your children’s teachers to ask the questions below, and if the answers are unsatisfactory, keep your children home on the Day of Silence, Friday, April, 15, 2016:

Cultural change rarely happens through dramatic single events. Rather, it happens through the slow accretion of little events that we dismiss as trivial. Gradual, incremental changes ignored eventually result in titanic cultural shifts. Those parents, teachers, and administrators who have known about the Day of Silence and have said and done nothing should feel ashamed of their acquiescence and cowardice. It is long past time that conservatives cease rationalizing their own passivity. The temporal and eternal lives of children are at risk.

Join us on April 8th in Orland Park for yet another IFI Forum, this time exploring The Case Against Common Core with Dr. Duke Pesta.  Click HERE for more information.