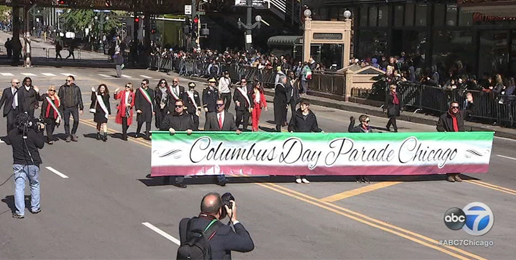 The Chicago Board of Education voted 5-2 on Wednesday, February 26, 2020, to stop celebrating Columbus Day and replace it with “Indigenous Peoples Day.” This latest example of political correctness comes on the heels of calls for paintings in Chicago Public Schools (CPS) that contain images of white people to be removed. CPS has the largest collection of early 20th century murals in the U.S. Most of them were commissioned by the Work Projects Administration as part of President Franklin Delano Roosevelt’s New Deal.

CPS has created a new educational steering committee to evaluate all future artwork displayed in the schools saying they will, “evaluate concerns raised about specific works of art to ensure equity and cultural responsiveness.”

A district statement read, “The district recognizes that some works of art in schools do not reflect the district’s values of diversity and inclusion.” This statement is ironic considering most of the paintings that are being suggested for removal feature Native Americans pictured peacefully with early white missionaries and settlers. Apparently, “diversity and inclusion,” means excluding white people.

Sarah Dennis, a social justice advocate, says her children were taken on a field trip to Bateman Elementary where they saw a mural that contained white women wearing head-coverings (a religious symbol that was common in early American history). Head-coverings are still worn today by Illinois citizens in the Amish and Mennonite communities. Her response is, ““We went out into the hallway and stared at it. I asked them, ‘What do you see? What kind of message does it send to the children who attend here, about who is important?’”

Other commentators called the art, “racist, dated and offensive.” This kind of disregard for religious practice and historical accuracy is reflective of the new postmodern deconstructionist mindset that seeks to tear down existing social structures and replace them with new politically correct ones.

Ironically, the Italian-American community that hosts more than 500,000 citizens in Chicago alone, released a statement against the removal of Christopher Columbus as a historical figure in the schools:

For Italian Americans, who endured horrific discrimination and continue to be the subject of stereotypical degradation in popular culture, Christopher Columbus is a symbol for the resilience of a people that have helped shape the cultural landscape of this great nation.

Is CPS seeking to represent all cultures equally and fairly or do they seek to give preference to some people groups while excluding others? This is the inequality that often happens when multiculturalism gets hijacked by special interest groups who seek to promote their own agendas.

This follows the example of other schools around the nation that have removed any paintings of America’s founders (e.g., George Washington, Thomas Jefferson or Patrick Henry) because they owned slaves.

Teaching history demands telling the truth about the mistakes that have happened in American History. We don’t want to lie to our children, telling them that America’s past was perfect. That can be done, however, without removing any reference to the positive impact made by European settlers. They were not all slave-owners, oppressors and racists. And even those who were often contributed in ways that have helped all future generations of Americans including historically oppressed groups.

The Declaration of Independence and the U.S. Constitution, though written by flawed humans, have helped all Americans. Oppressive regimes like Communist regimes scrub history to advance an ideology. As Americans we should seek to tell the whole story: the good, the bad and the ugly. We can’t do that if ideology leads to censorship.

THIS SATURDAY! IFI is hosting our annual Worldview Conference on March 7th at the Village Church of Barrington. This year’s conference is titled “Thinking Biblically About Our Corrosive Culture” and features Dr. Michael Brown and Dr. Rob Gagnon. For more information, please click HERE for a flyer or click the button below to register for the conference.