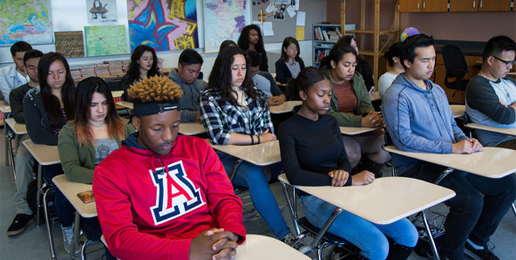 Next time you hear some arch-defender of the a-constitutional “wall” of separation between the church and state whose knickers are in a twist because a school allows ten seconds of silence during which students may pray, remember this story, reported last summer by the Chicago Tribune:

Students at a Chicago high school were led into a room with shades drawn and door windows papered over, lit only with candles and scented by incense. They were handed flowers and told to pay attention to instructors, according to one student’s account.

Jade Thomas, an incoming sophomore at Bogan Computer Technical High School, said instructors “chanted in a foreign language” and “threw rice, seasonings and oranges in a pan in front of a picture of a man.” She described the ritual, which she said involved a “secret mantra,” to a rapt audience at a Chicago Board of Education meeting Wednesday.

At one point, Jade said, “they tell us to place the flowers in the pan with everything else, and they ended the song. I felt uncomfortable because I didn’t know what they were saying or who the man was in the picture.”

Jade Thomas’ discomfort was entirely warranted. The program to which she was objecting is called Quiet Time, a euphemistic name that conceals from parents that it’s the practice of Transcendental Meditation (TM), which is Hinduism repackaged (and trademarked) for Western audiences.

Maharishi Mahesh Yogi, disciple of Guru Dev (aka Swami Brahmananda Saraswati), repackaged Hinduism—which emerged from the ancient religious Vedic tradition—in a form more acceptable to western minds and brought it to American hippies in the 1960s and 1970s. While disciples of Maharishi Mahesh Yogi publicly (and deceitfully) claim that TM is solely a scientific method of relieving stress, they conveniently omit the religious dimensions of the program and practice.

The Chicago Board of Education is colluding with the University of Chicago Urban Labs, which is, in turn, partnering with Hollywood director and long-time Transcendental Meditator David Lynch to experiment on Chicago Public Schools (CPS) students.  They hope to determine whether introducing students secretly to Hindu religious practices can “help youth reduce their toxic stress, succeed in school and stay safe.”

Transcendental Meditation, the core intervention of the Quiet Time Program. … does not involve any religion [or] philosophy.”

“Does not involve any religion”? Lol. You be the judge of that claim. As a former TMer married to a former TM teacher, I’ve already judged that claim.

Decades ago when I became a TMer and my husband a TM teacher, mantras—the secret word repeated soundlessly during meditation—were assigned during the “initiation” ceremony that Jade Bogan described, which is called a puja. Initiates were asked to bring a piece of fruit, a new handkerchief, and flowers to the ceremony which was conducted in a darkened, incense-filled room in front of a de facto altar. The TM teacher would then begin the ceremony which was conducted in Sanskrit, so the initiate had no idea what was being spoken. Much later after studying in Spain with Maharishi and becoming a TM teacher, my husband learned the Sanskrit words spoken during the ceremony:

At various points during the ceremony, the teacher would pause and ask the initiate for one of the gifts they were asked to bring which the teacher would then place on the altar, thus making the initiate an unwitting participant in a distinctly religious ceremony. At the end of the ceremony, initiates were given their mantras, which, as it turns out, are the names of Hindu gods.

Initiates were prohibited from telling anyone their secret mantras, which I eventually learned were chosen according to the initiate’s age. My mantra was pronounced “ah-ing” and is intended to honor the Hindu goddess of Saraswati.

So, does that sound like it “does not involve any religion”?

As to the claim that TM involves no philosophy, ask any long-time meditator about transcendental consciousness, cosmic consciousness, unity consciousness, god consciousness, and sidhis. If you have the patience to slog through Maharishi’s thicket of religious/philosophical dogma, click here.

David Lynch created the David Lynch Foundation, which then created the Center for Wellness and Education in order to promote TM by renaming it Quiet Time. Unfortunately, CPS is not the only school district introducing children to the ancient Vedic practice of TM.

TMers continually cite positive effects. They even take credit for civil conflict ending, claiming that any place where at least 1 percent of the population is meditating, peace ensues. Maharishi claimed that,

Here are two questions that Chicago Board of Education members should be asked:

For years, the TM organization has been plagued by myriad criticisms for deception like its failure to acknowledge its religious nature or promises of superpowers (sidhis) like Yogic flying. Over 40 years ago, Maharishi told his disciples that by attending longer residential courses during which attendees would meditate for extended periods of time and receive additional magic words (i.e., sutras), they would start levitating and shortly thereafter flying. Of course, the TM organization profited from these longer courses.

Well, here we are decades later and to my knowledge, no TMer is flying. You can find amusing videos online of TMers still “hopping.” Well, you can find videos of hale and hearty men “hopping” whilst huffing and puffing. I’ve yet to see a video of a frail elderly woman “hopping.”

There are also criticisms of the studies the TM organization touts regarding its efficacy as well as more serious concerns about potential risks to mental health. For more information about TM from a former meditator, click HERE.

In the interest of parental rights and transparency, I hope CPS administrators in schools that are teaching ancient Vedic meditative techniques will reveal to every parent the criticisms of Transcendental Meditation leveled by many.

In the interest of intellectual consistency, I hope those virulent opponents of 10 seconds of silence in public schools during which students may pray (but are not taught prayer practices) will direct their virulence to schools that teach repackaged Hinduism to students.

And in the interest of fiscal transparency and accountability, I hope some public watch dogs will find out if any local, state, and/or federal money is lining the pockets of the David Lynch Foundation.

Transcendental Meditation in the New Millennium (Part One)