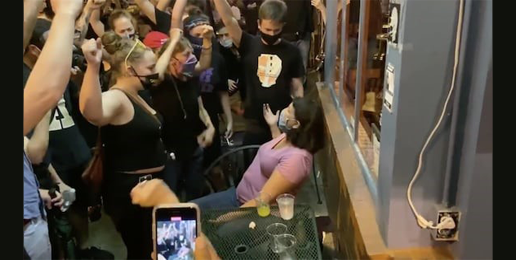 Videos have been circulating of young bestial thugs—whites and blacks, women and men—shrieking in the faces of al fresco diners, commanding them to raise a fist in solidarity with BLM/Antifa totalitarians. To leftists nothing says freedom quite like coerced performative acts. See for yourself the future of the Democratic Party: 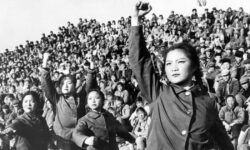 Students who answered Mao’s call for continuing revolution … targeted political enemies for abuse and public humiliation. … Under a campaign to wipe out the “Four Olds”—ideas, customs, culture, habits—they carried out widespread destruction of historical sites and cultural relics.

Or maybe today’s totalitarian culture-destroyers are inspired by the Red Guard, whose salute they mimic.

Before Chairman Mao thought to use easily indoctrinated youth to advance political oppression, the Nazi Regime had mastered the tactic. Here’s an eerily relevant description of the Nazi Party’s exploitation of German youth to advance the pernicious Nazi cause:

Millions of German young people were won over to Nazism in the classroom and through extracurricular activities. In January 1933, the Hitler Youth had approximately 100,000 members, but by the end of the year this figure had increased to more than 2 million. By 1937 membership in the Hitler Youth increased to 5.4 million before it became mandatory in 1939. The German authorities then prohibited or dissolved competing youth organizations.

Education in the Third Reich served to indoctrinate students with the National Socialist world view. Nazi scholars and educators glorified Nordic and other “Aryan” races, while labeling Jews and other so-called inferior peoples as parasitic “bastard races” incapable of creating culture or civilization.

After 1933, the Nazi regime purged the public school system of teachers deemed to be Jews or to be “politically unreliable.” Most educators, however, remained in their posts and joined the National Socialist Teachers League. 97% of all public school teachers, some 300,000 persons, had joined the League by 1936. In fact, teachers joined the Nazi Party in greater numbers than any other profession.

In the classroom and in the Hitler Youth, instruction aimed to produce race-conscious, obedient, self-sacrificing Germans who would be willing to die for Führer and Fatherland. Devotion to Adolf Hitler was a key component of Hitler Youth training. …

Since some Americans—particularly leftists—struggle with analogical thinking, let’s paraphrase that description to make its relevance easily comprehensible:

Millions of American young people were won over to socialism/Critical Race Theory/“LGBTQ” theory/feminist theory in the classroom and through extracurricular activities. By 2020 membership in or support for what became known as the Intersectionality Regime had increased dramatically. Dominant leftist cultural forces had persecuted youth organizations like the Boy Scouts and Girl Scouts into reinventing themselves to align with the Intersectionality Regime.

In the classroom, corporate boardrooms, social media, the arts, the mainstream press, and organizations like BLM™ and Antifa, instruction was aimed to produce race-conscious, class-conscious, man-hating, sexual-deviance-supporting activists who would take the fight to the streets. Devotion to the Intersectionality Regime was a key component of cultural conditioning.

Co-founder of the Toronto chapter of BLM™, Yusra Khogali, once tweeted, “White ppl are recessive genetic defects. this is factual. … black ppl simply through their dominant genes can literally wipe out the white race if we had the power to.” She tweeted, “Please Allah give me the strength to not … kill these … white folks out here today.” In 2015, she tweeted, “whiteness is not humxness. infact, white skin is sub-humxn.”

Kinda, sorta, maybe sounds like a Nazi talking about Jews.

Compulsory performance of the Sieg Heil/Red Guard/Black Panthers/BLM salute is part of the effort to compel freethinkers to pretend to embrace the ideas of slave reparations, systemic racism, and collective guilt, which hold individuals culpable for sins they have never committed.  The notion of collective guilt for the past sins of other individuals is both unbiblical and poisonous.

In a speech delivered in 1988 in Vienna on the 50th anniversary of the Nazi occupation of his home country of Austria, Holocaust survivor Viktor Frankl warned against the dangerous idea of “collective guilt”:

[M]y father … died in Theresienstadt Camp; my brother … did not return from Auschwitz; my mother … was killed in the gas chambers of the same camp; and my first wife[’s] …  young life came to an end in Bergen-Belsen Camp. And yet at the same time I will ask you not to expect to hear from my mouth a single word of hatred. For whom should I hate? I knew only the victims; I do not know the perpetrators—at least, not personally. And I categorically refuse to attribute collective as opposed to personal guilt.

There is no such thing as collective guilt. Believe me, today is not the first occasion on which I have said that. I have been saying it since the day I was liberated from my [fourth and] last concentration camp. It is my conviction that anyone who assigns collective guilt to every Austrian [or German] citizen between the ages of zero and fifty is committing a reprehensible and insane act. Or, to put it in psychiatric terms: it would be reprehensible if it were not insane–and it would be a relapse into the Nazi ideology of collective family guilt [the difficult German word Sippenhaftung here refers to the dangerous Nazi dogma of kin liability, tainted blood(line), or genetic guilt by association]. Let this be said to all those who believe they have the right to expect people to feel guilty or even ashamed of something they did not do or fail to do but something their parents or grandparents had to answer for. …

I’ll tell you I think there are only two ‘races’ of people: those who are decent people, and those who are not. That distinction goes right through every nation, and within nations right through every political party and every other group. Even in the concentration camps here and there we came across more or less decent people who belonged to the SS. And in the same way there were also scoundrels amongst the prisoners.

The decent people are in the minority; they have always been in the minority and, I think, always will be. But the danger lies elsewhere. The danger is to be found in a regime or a system which brings the scoundrels to the top; in other words which puts the reins of power in the hands of the worst representatives of the people. Therein lies the true peril. And no nation … can claim to be immune from such danger. Which is why I presume to say that in principle any country is capable of perpetrating the holocaust.

… In my view there are only two … types of politicians. The first is the politician who believes that the end justifies the means—any means, even terrorist means. The second type is profoundly aware that there are means that can desecrate even the most sacred ends.

[T]he need of the day … is that all men of good will should finally reach their hands out to each other across all the graves and divisions.”

One of my daughters once expressed disappointment that I hadn’t saved any of my clothes from the early 1970’s. I explained that although styles return, they never return in exactly the same form. Same goes for history, which explains why even remembering history doesn’t guarantee we won’t repeat it. Today’s cultural revolution has all the earmarks of past revolutions, and yet too few Americans recognize those earmarks because on the surface this one appears different.

Unless we tear the blinders from our eyes and look clearly at the big picture, the republic as we have known it will be gone in a short time. The children and grandchildren of Millennials will grow up in a world of oppression and depravity the likes of which America has never known but civilizations around the world and throughout history have.

Viktor Frankl points to the solution to evil in our midst:

[P]lease remember one thing: Resistance always requires heroism. And there is only one person of whom anyone has the right to expect heroic acts. And that is oneself.