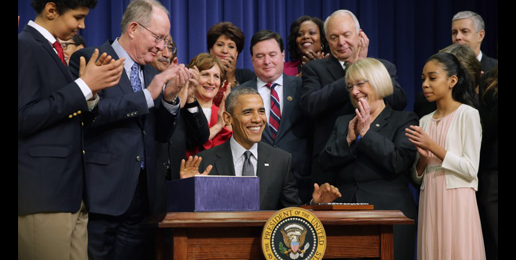 Using data primarily gathered through the public-education system, Big Brother and the collectivists running the government schools now know more about American children than their own parents do. The awesome powers offered by “Big Data” will blow your mind.

In fact, authorities have vacuumed up so much private information on America’s youth that, according to a U.S. Department of Education report, it’s now possible to predict the “future behavior and interests” of children. It also allows the government to manipulate their thoughts and attitudes like never before.

The data-gathering has become so intrusive and extreme that some critics have even referred to it as the “data-rape” of American children. And this is just the start.

From biometric data and private health care information to academic records, online browsing habits, and mental-health data, government schools and technocratic policymakers across the United States want it all—from “cradle to career” and beyond, as authorities often put it. Thanks to federal grants, they’re getting it, and sharing it.

Hundreds of data points on each child are now being collected and stored in databases accessible by state and federal authorities. Privacy laws and regulations prohibiting the creation of national databases with student information were ignored and pushed aside beginning during the Obama administration, and even earlier.

Through a byzantine combination of public schools, government agencies, social-media companies, crony contractors, testing companies, non-profit organizations, and more, there’s now more data collected on children than anyone could have imagined even just a few short years ago. Many times, the children do not even realize they’re giving their private data to Big Brother—forever.

The tip of the iceberg occasionally becomes visible. Right now, for example, there’s an ongoing lawsuit against the non-profit College Board, currently headed by Common Core architect David Coleman, for allegedly collecting and selling private student data to third parties without the consent of the children or their parents. According to the plaintiffs, numerous laws have been broken.

That is all a big deal, of course. And it’s wrong. But it pales in comparison to the dangers of what Big Government and Big Business are doing right now—and what they have planned for the future.

The Common Core national standards imposed on the United States by the Obama administration, covered in the most recent piece in this series, super-charged the government’s data-harvesting and data-mining operations. After that, the Every Student Succeeds Act (ESSA), which Obama referred to as a “Christmas miracle,” took it even further.

But it has been going on for quite some time. Consider a 2012 “Issue Brief” titled “Enhancing Teaching and Learning Through Educational Data Mining and Learning Analytics.” In the report, the U.S. Department of Education’s Office of Educational Technology dropped a bombshell regarding what all this data was going to be used for: Basically, the feds want to make predictions about your children.

In the report, authorities said that “online learning systems” allow the government to “capture streams of fine-grained learner behaviors.” These systems send to a database the “time-stamped student input and behaviors captured as students work within the system,” the document explained.

Authorities then combine that behavioral data with other external information sources, including sensitive personal data held by the school, the district, or the state, according to the report. Then, the information is put to use making predictions and shaping “interventions.”

“A predictive model combines demographic data (from an external student information system) and learning/behavior data from the student learning database to track a student’s progress and make predictions about his or her future behaviors or performance,” the report explains (emphasis added).

The data being collected can also allow the government to peer into the minds of students. “Big data captured from users’ online behaviors enables algorithms to infer the users’ knowledge, intentions, and interests and to create models for predicting future behavior and interest,” the report adds.

Using controversial federally funded “surveys” under the guise of “health,” public schools across the United States have been collecting some of the most intimate data imaginable: political views, religious beliefs, sexual behaviors, sensitive information on parents or the home, private medical information, and much more.

Among the creepiest elements of the data-gathering and data-mining machine is the ability it gives to peer into the innermost thoughts and feelings of students. With access to this data, and the computing power to process it all, government and those connected to it can become nightmarishly powerful—and they will, if nothing is done to stop it, as the people of China are discovering under the “social credit” system.

Consider a 2010 speech to the United Nations Educational, Scientific and Cultural Organization (UNESCO), also the subject of part 9 in this series, by then-U.S. Education Secretary Arne Duncan. In it, the Chicago radical celebrated the rapidly expanding data-gathering colossus and the new powers it would unleash.

“More robust data systems and a new generation of assessments can assist teachers and principals to improve their practices and tailor their instruction in ways that were largely unthinkable in the past,” said Duncan, who regularly boasted about using schools to brainwash children with “sustainability” propaganda. “We have advanced data systems that we are constantly improving.”

In the decade since then, those “advanced data systems” have become ever more sophisticated, enabling governments to build unfathomable personal profiles on every public-school student in the United States. Even students in private schools and home schools are now in the cross-hairs of the data-mining machine.

Some of the technological tools that have already been used by the federal government in these areas have sparked grave privacy concerns. In 2013, the U.S. Department of Education released a report titled “Promoting Grit, Tenacity, and Perseverance: Critical Factors for Success in the 21st Century” that became a lightning rod for criticism.

Among other developments, the report included revelations about the sorts of technology being used in some federal programs to gather data on children. One of the tools, for example, was described as a “facial expression camera.” The report said this was used to “detect emotion” and “capture facial expressions,” with the data then processed through software and fed into databases.

Other tools described in the report, which has since been taken off the Education Department’s website, included a “posture analysis seat,” a “pressure mouse,” and a “wireless skin conductance sensor.” All of these existing technologies are used to monitor and collect “physiological response data” that can “examine student frustration.”

“Researchers are exploring how to gather complex affective data and generate meaningful and usable information to feed back to learners, teachers, researchers, and the technology itself,” the report explains, with “affective” data referring to students’ attitudes and feelings, rather than academic or educational abilities. “Connections to neuroscience are also beginning to emerge.”

More recently, a U.S. company called BrainCo developed a headband that measures and collects data on students’ “brainwaves.” BrainCo, which is part funded by Chinese state-owned companies, has already trialed the devices on 10,000 students in China. Back in 2017, the CEO talked of building the “world’s largest database,” which could be analyzed by artificial intelligence to better detect emotions. Some U.S. schools have reportedly tried the devices, too.

One of the major concerns surrounding all this intrusive data-gathering technology is that it’s being used by government schools and the education establishment to manipulate the thoughts, attitudes, beliefs, and behaviors of children. As the technology advances, it will allow bureaucrats and technocrats to do much more of this in the future, too.

Under new “Social and Emotional Learning” (SEL) programs, which are currently all the rage in educational circles, authorities set goals for various attitudes and values they want children to hold. By testing for these “affective” characteristics, the technology can help determine whether children hold the government-mandated attitudes. If not, the programs then help to develop “interventions” to get the desired attitude inculcated in the child.

As far back as 2016, Education Week revealed that, under the guise of providing “personalized learning experiences,” new technology was aiming at students’ “individual emotions, cognitive processes, ‘mindsets,’ and character and personality traits.” So-called “non-cognitive competencies” were also targets.

That same year, the U.S. Department of Education released a “National Education Technology Plan” peddling “assessments” that measure “non-cognitive competencies” including “attitudes that facilitate functioning well in school, work, and life.” How the feds would determine the correct “attitudes” for children to have was not specified.

The potential for abuse is self-evidently enormous. What if these tools get into the hands of evil-doers? What if they already are in the hands of evil-doers? Do Americans really want unelected bureaucrats at the far-left U.S. Department of Education—where 99.7 percent of 2016 donations to presidential campaigns went to Hillary Clinton—determining what attitudes and values children will hold on controversial issues such as homosexual marriage, immigration, and abortion?

When one realizes that the public education system was literally created by Utopian collectivists to fundamentally transform society, as this series has documented extensively since the first segment, the dangers are obvious and extraordinary.

Indeed, the architects and current leaders of the government-school machine have long been open about their desire to shift the United States away from a liberty-minded Christian society, and toward collectivism and humanism. With these powerful tools, resistance will become increasingly difficult, if not futile, for children held captive by the system.

Another major concern is that all of this data being gathered by schools is being fused with labor and career data. For years, authorities have been openly working on connecting the various “education” databases packed with information gathered on Americans by schools with that collected by other government organs.

Officials are hoping that this enormous amount of data, all brought together in one place, will help them do what previous attempts at central planning have always failed to do: accurately understand the needs of the economy, and then adjust production, employment, consumption, training, and education accordingly.

Then, imagine combining all of that with emerging developments such as artificial intelligence and super computers with unprecedented capabilities, plus all of the data being gathered on Americans by agencies such as the Internal Revenue Service, the National Security Agency, and more. Big Brother will know everything about everyone, literally from “the cradle,” as the Utopians themselves often say.

It’s a recipe for disaster—or even a catastrophe of unprecedented proportions.

Around the world, the U.N. is also leaning heavily on governments to start collecting, sharing, analyzing, using, and weaponizing all sorts of data on children via schools. And more than a few foreign governments—communist China and certain Western European governments, among others—have been more than happy to jump on the bandwagon.

Humanity must resist. Americans, in particular, have the means to effectively resist, if only they can find the will.

Privacy is extremely important to a free society. That’s why America’s Founding Fathers enshrined it in the U.S. Constitution. Without privacy, liberty cannot exist. And without liberty, prosperity and other blessings enjoyed by the people of the United States will end as well.

Americans must demand an end to the Orwellian data-gathering apparatus, and protect their children from it, before it’s too late.