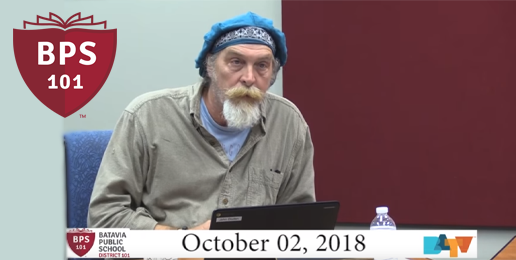 When the parent of a girl complained about the administration’s decision to sexually integrate girls’ private facilities, the principal, Bryan Zwemke, suggested her daughter use a restroom in the nurse’s office, or use a restroom near the front door that the boy may but is unlikely to use due to its location, or to holler in restrooms first to make sure they are being used by only girls, or to have a school monitor stand outside while she’s in the restroom. Zwemke also recommended that girls who don’t want to change clothes in front of or near the boy in the girls’ locker room should change in a small utility closet.

Really? Does Zwemke really think those options are just, reasonable, and compassionate? “Progressives” argue that “trans”-identifying children who aren’t comfortable using facilities with persons of their same sex should not be expected to use separate facilities but now administrators expect students who aren’t comfortable sharing facilities with opposite-sex persons to use separate facilities. Toto, I’ve a feeling we’re not in Kansas anymore.

At a recent school board meeting in which three parents respectfully expressed their concerns (from 17:30-25:50) about the introduction of co-ed restrooms and locker rooms, unhinged board member John Dryden melodramatically walked out for several minutes and then later posted this on his Facebook page:

Sometimes School Board meetings are like Mr. Toad’s wild ride. (Enjoy it on BATV) You can watch me try really hard not to launch myself over the table and strangle an anti-transgender lynch mob. The Board Comments at the end are worth listening to. Cheers Batavia – let’s move ahead, not backwards….

A report in the Daily Herald reveals more of Dryden’s bigotry:

I watched a lot of people throw a middle school kid under the bus.

Following Dryden’s break for the vapors, two additional speakers expressed concern over the sexual integration of private spaces: two actual girl students (26:10-28:10). It appears big, burly board member John Dryden called three moms and two middle school girls a lynch mob that he wants to strangle. Clearly, Dryden neither respects nor tolerates the diversity within his own community as he embraces an intellectually incoherent ideology and morally bankrupt policy.

Near the end of the meeting, after Dryden mustered the wherewithal to resist his urge to strangle three moms and two little girls, he smugly, incorrectly, and perhaps dishonestly lectured the purported “lynch mob” on Title IX of the Education Amendments of 1972, saying this (1:01:49-1:03:42):

Federal law Title IX requires, allows the right to be treated according to one’s gender identity, that the name and pronouns used for that individual will match the gender identity. They cannot be forced to used separate facilities. The right to use restrooms and locker rooms that match their gender identity is protected under Title IX.

Moreover, the Illinois Human Rights Act, which is state law, states this:

The Act permits schools to maintain single-sex facilities that are distinctly private in nature, e.g., restrooms and locker rooms.

Neither Dryden’s wishes, nor Obama’s edicts, nor the lawsuits of “trans” activists have transformed Title IX (or the Illinois Human Rights Act) into a command to sexually integrate private spaces in government schools or to mandate untruthful speech (i.e., incorrect pronoun-usage). The board must correct this misstatement, and Dryden owes the moms and girls a public apology.

Dryden wasn’t done yet. He next scolded parents who used pronouns correctly:

I hope in the future when we’re discussing publicly this issue that we can respect the person’s right to be addressed by their preferred pronoun.

No person has a right to compel others to participate in a fiction, speak a falsehood, or compel others to adopt their new politically constructed grammar rule. For those who believe that the “trans” ideology is both false and destructive—which it is—referring to boys who think they are or wish they were girls is a destructive lie. Believing that referring to boys as girls is respectful or good depends on prior assent to Leftist assumptions, which no one is obliged to do. Neither Dryden-the-Scold, nor the “trans” community, nor this boy and his family have a moral right to dictate how people think or speak about this science-denying ideology.

Board member Tina Bleakley made this ironic statement:

To come publicly to speak about a child disappoints me.

The administration, apparently in cahoots with the school board, allow a boy to invade the private spaces of girls and then has the audacity to suggest that this unnamed boy’s privacy has been violated by the expression of opposition to the policy? Surely Bleakley jests. It is the adult leaders of Rotolo Middle School who have committed a disappointing act, which is expecting girls to feel comfortable sharing private spaces with a peer of the opposite sex.

Here are some questions that the administration and board should be asked and should answer:

School board members and administrators are never asked these questions. Nor are they confronted with the fact that de facto co-ed restroom mandates teach all children that unless they are willing to relinquish their privacy and their beliefs about the profound meaning of biological sex; unless they accept unproven, Leftist assumptions about biological sex, “gender” and “gender identity”; and unless they silence the expression of their beliefs, they will be deemed ignorant, hateful, intolerant bigots hell-bent on lynching those who identify as the sex they are not and never can be.