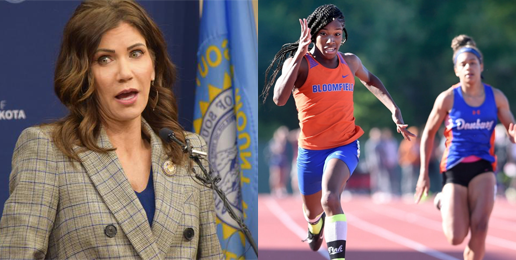 South Dakota Governor Kristi Noem has revealed multiple times that she lacks both wisdom and courage when it comes to the issue of cross-sex impersonation. She just vetoed a bill (HB 1217)  that would have required participation in school athletics at all levels to correspond to objective, immutable biological sex rather than immaterial, subjective feelings about “maleness” and “femaleness.” In so doing, she failed girls, disappointed conservatives, and reneged on her enthusiastic and public commitment on March 8 to sign the bill.

Noem has sent the bill back to the legislature with changes she says must be made in order for her to sign it, and she’s now doing what weaselly politicians always do: She is using weasel words to try to conceal that she has capitulated to the “trans”-cult and to those who will profit from leaving bad enough unmolested.

Noem offers several rationalizations for her disappointing capitulation. She claims she’s merely tinkering with the “Style” and “Form” of the bill—not with its substance—and she claims she’s merely trying to prevent potential lawsuits that may emerge from language pertaining to the prohibition of anabolic steroids. Oh really? See if you, kind readers, think these are merely changes in “Style” and “Form.”

While Noem has focused publicly on language pertaining to anabolic steroid use, she has not mentioned that her changes entail removing Section 13-67-2 language that says before permitting a student to participate on an athletic team or in a sport, schools must obtain a written statement verifying.

The student’s biological sex, as ascertained at or before birth in accordance with the student’s genetics and reproductive biology.

Noem’s changes include replacing Section 13-67-2. Section 13.27-3.1 instead requires that a certified copy of a student’s birth certificate be provided. But here’s the kicker: Birth certificate sex designations can be changed in South Dakota.

In fact on February 5, 2021, a South Dakota Senate committee killed a bill that would have prevented birth certificate sex designations from being changed. A 17-year-old girl who pretends to be a boy testified that she was in the process of changing her birth certificate. Noem surely knew about this defeated bill when she made her changes to “Style” and “Form.”

Noem also stripped the bill of references to collegiate athletics, thereby leaving female athletes unprotected from being forced to compete against males. In defending her claim that the bill is “unrealistic in the context of collegiate athletics,” Noem inadvertently reveals the truth, saying “we are proud of our universities’ athletic programs, and in particular the great strides we have taken to gain national exposure and increase opportunities for our next generation.”

Translated, she means she doesn’t want to take on those organizations that regulate collegiate sports and perhaps lose opportunities to host NCAA meets and tournaments. And she doesn’t want to risk what “trans”-cultists and their ideological collaborators did to North Carolina.

The Argus Leader reports on the salient considerations of Noem and those who will sell girls’ Title IX rights and our First Amendment rights a for a mess of money:

[O]fficials tied to groups like the Greater Sioux Falls Area Chamber of Commerce and the Sioux Falls Sports Authority … worry that such a law could result in economic backlash.

In 2016, for instance, dozens of events scheduled in North Carolina never happened after the Legislature there passed a measure that would have stopped local governments from requiring businesses allow transgender people to use the bathroom of their choice.

And the NCAA, which brings collegiate athletic tournaments to Sioux Falls regularly, has an inclusion policy that could conflict with HB 1217.

Apparently the collegiate athletic careers of a few women are a small price to pay in order to be able to host NCAA tournaments and meets. Money. Yum, yum, eat it up.

Imagine, however, if Noem had not buckled. And then imagine if other states had followed her lead. Only principled stances pertaining to biological sex will revert rules, regulations, policies, and laws to sanity.

If spineless lawmakers cede power to the NCAA and chambers of commerce to determine that males can usurp female athletics and access their private spaces, America is lost.

Some are not surprised by Noem’s equivocation on policies related to the “trans” issue, citing her odd reluctance to comment on both the sports and birth certificate bills when asked about them in Feb.

Many outside South Dakota didn’t hear Noem say this in answer to a question about what message she wanted to send to cross-sex passers:

Everybody understands that South Dakota is a welcoming place, especially after this last year that we went through in 2020. … So if they would like to be a part of our communities, our way of life, if they value their freedoms, I would encourage them to come visit.

Any true-red conservative politician knows that cross-sex impersonators do not value America’s foundational freedoms. All conservatives know the “trans” cult seeks to force all Americans to pretend that men who claim to be women are, in reality, women. All conservatives know that cross-sex impersonators do not want freedom of speech and the free exercise of religion to be extended to those who disagree with science-denying “trans”-cultic beliefs and practices.

Take ACTION: Please click HERE to send Gov. Noem a message about her failure to protect women and girls from the radical agenda of the LGBTQIA agenda. Gov. Noem publicly promised to sign into law a bill that would ban biological men from competing against girls and women in sports. Unfortunately, when the pressure was on from powerful special interest groups, she caved and publicly rejected the bill.