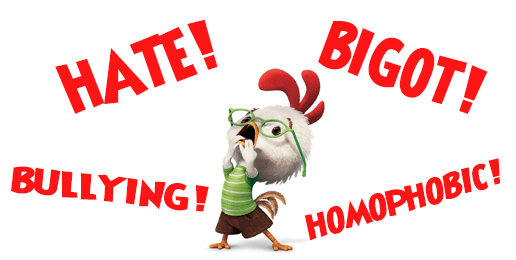 My favorite writer, Anthony Esolen, Professor of English at Providence College in Rhode Island, has written yet another incisive and illuminating article, this time on the dishonest exploitation of school bullying prevention efforts for the purposes of normalizing homosexuality. His piece, titled “Pulpit for Bullies” exposes the ugly tactics of the left, made all the more offensive because they’re employed in our schools against conservative teens:

[A]ny disapproval of the homosexual life is to be construed as homophobic, without regard to reasons or persons….The message may be unfolded thus: If you do not wear this shirt, or if you do not approve of the life it celebrates, you are evil. You’re a bully.

The occasion of Dr. Esolen’s piece is a court decision on the case of a Michigan student who was publicly berated and denied his constitutional right to freedom of speech by his economics teacher for expressing his beliefs about homosexuality on yet another purported “bullying prevention” day (it would be more accurate to refer to these as homosexuality celebration days).

It is our hope that Professor Esolen’s piece will be read in its entirety and widely circulated. Conservatives need to stop allowing the name-calling of the left to silence them. The ultimate goal of liberals is not to end bullying, which is a goal all decent people share. The ultimate goal is the eradication of conservative moral beliefs or the creation of a social, political, and legal climate that makes expressing them too costly. Redefining bullying and calling conservatives ugly names is merely a tactic in their larger unholy war.

On June 19, the US District Court for the Eastern District of Michigan ruled in favor of a high school student named Daniel Glowacki, who had charged that his high school teacher, Jay McDowell, had violated his constitutional right to freedom of speech. He was granted one dollar in compensation. The court’s verdict, in vulgar terms, was that the pig had the right to say what he said.

The facts, according to the court’s judgment, are these.

On October 20, 2011, the Gay Straight Alliance at Howell High School planned to take part in a national “campaign aimed at raising awareness of the bullying of gay, lesbian, bisexual, and transgendered youth.” The court acknowledges that the day is also called “Spirit Day,” which, the plaintiffs contended, is so-called to foster acceptance in the public schools of the homosexual lifestyle. The Gay Straight Alliance made up flyers to be posted all around the school, urging students to wear purple on that day as a sign of their solidarity with homosexual teenagers. The principal approved the flyer.

Wendy Hiller, one of the teachers, printed a batch of purple T-shirts, reading “Tyler’s Army” on the front and “Fighting Evil with Kindness” on the back. She had, in the past, worn a black shirt reading “Tyler’s Army.” The name refers to Tyler Clementi, a freshman at Rutgers who took his own life after his roommate had secretly filmed him in a homosexual encounter. Hiller, says the court, in evident agreement, did not believe that the shirts would be controversial, since the topic was bullying and not homosexuality. Hiller sold some of the shirts to other teachers at cost.

Jay McDowell, an economics teacher, bought one of those shirts and wore it in class that day. McDowell then showed his students a video about a gay teenager who committed suicide, and devoted the rest of the class period to discussion.

Daniel entered McDowell’s classroom for the sixth period that day. McDowell noticed that one of the girls in class was wearing a belt buckle with the Confederate flag. He ordered her to take it off, because it offended him. Daniel then asked the obvious question. Why should it be all right for so many students and teachers to wear the purple T-shirts, but not all right for the girl to wear the belt buckle?

Consider the great difference here in boldness and specificity and intention. The belt buckle expresses a feeling of pride or affection for the American South. It is small. It does not demand to be noticed and read. It does not say anything. It is not a part of a school-wide campaign. It is not as if the student, together with others throughout the school, wore it on her shirt, with the words, “The South shall rise again.” It is also a private thing; she is just one student.

McDowell then, predictably, told Glowacki that the Confederate flag was a symbol of hateful things, like “the slashing and hanging of [African Americans].” It was discriminatory against blacks. Glowacki responded that the purple T-shirts were discriminatory against Catholics. This prompted a heated exchange. The young man is no theologian, and the teacher no moral philosopher. McDowell says that he told Glowacki that it was all right if his religion said that homosexual behavior was wrong, but that Glowacki could not say that in class. He also says, missing the illogic and the aggressiveness of his statement, that he told Glowacki that to say “I don’t accept gays” is like saying “I don’t accept blacks.” When Glowacki replied, “I don’t accept gays,” McDowell threw him out and began disciplinary action against him.

The parents complained, and McDowell was issued a reprimand: “You disciplined two students for holding and stating personal beliefs, to which you disagree. You disciplined them in anger under the guise of harassment and bullying because you opposed their religious belief and were offended by it. The students were causing no disruption.” Indeed, the reprimand specifically states that McDowell attempted to get Daniel to “recant,” and notes the irony that this should occur on a day devoted to fighting bullies.

What happened to Daniel after that is instructive, and does not enter the court’s opinion, though it easily might have, since it provides abundant evidence for the plaintiff’s contention that the Anti-Bullying Day was really a Pro-Gay Day, and that Jay McDowell was himself a bully. McDowell went on television claiming that Glowacki had entered the classroom spewing epithets against gays—a claim which, if true, the court would certainly have seized upon. Glowacki was (and continues to be) vilified across the nation. The lesbian Ellen DeGeneres featured a gay student on her television show who testified for McDowell in the disciplinary hearings.

There are two points I wish to make. The first is that the superintendent’s ironical insight did not go nearly far enough—the bullying was not limited to that incident in the classroom. The second is that the state is acting as a church, engaged in catechesis. The superintendent was correct; no student should be constrained to make an auto da fé. Those confessions, rather, ought to be procured over years of badgering, cajoling, wheedling, insinuating, urging, tempting, persuading, ridiculing, debating, by all means fair and foul, so long as the façade of “objectivity” and religious “neutrality” and “respect” for the students—but never for the parents!—be maintained.

On the bullying: the students know that what is going on here is the advocacy of homosexual activity. Many people are bullied, for all kinds of reasons—for being fat, or stupid, or poor, or ugly. If the school wishes to teach gallantry and kindness, why not do so with as broad a sweep as possible? But the teachers and students chose Tyler Clementi as their cause célèbre.

Homosexual activists do not say that Clementi was merely the victim of a nasty roommate. Their point—as the students at Howell High School no doubt were made well aware—is that Clementi was the victim of a general disapproval of his behavior. That is, any disapproval of the homosexual life is to be construed as homophobic, without regard to reasons or persons. That is precisely the message conveyed by the purple T-shirts.

The message may be unfolded thus. If you do not wear this shirt, or if you do not approve of the life it celebrates, you are evil. You’re a bully. You want people like Tyler Clementi to die. The superintendent, but not the court, notes that Glowacki was held up to opprobrium in the classroom.

Neither the superintendent nor the court expresses any concern about the massive contradiction that McDowell could order a student to remove a belt buckle because it might create a hostile environment for some other students, while not noticing that the entire school bristles with hostility against Catholics, evangelical Protestants, orthodox Jews, and anybody else who holds that sexual intercourse is to be bound within marriage, between a man and a woman.

Which brings me to my second point. If I hire a man to teach my son economics, I’d be shocked to learn that he’d been using his position to run down my faith. Granted that students, because of their age and the special circumstances, do not possess complete freedom of expression in school, it is equally true that teachers and schools must not capitalize upon their strength, their numbers, and their separation from the home, to advocate what is essentially a religion, with its (peculiar and incoherent) set of universal demands and condemnations.

Suppose it were not a Confederate belt buckle that McDowell had ordered removed, but a placard reading “Thou shalt not bear false witness against thy neighbor.” That commandment—nowadays not controversial, though we obey it no better than any generation ever has—would be proscribed, as “religious” speech. But “thou shalt not disapprove publicly of the homosexual lifestyle,” which is what “Tyler’s Army” means, and in an aggressive and accusatory way, with the aim of silencing those who might disagree, and humiliating those who might express that disagreement—that is plastered all over the school and on the bodies of the teachers themselves, the masters, whom the students are supposed to respect or at least tolerate, since their future in part rests in those teachers’ hands.