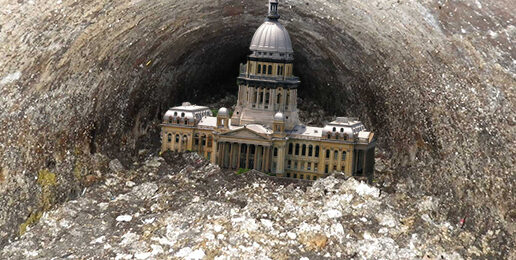 Illinois Democrats are hell-bent on passing a new law—the REACH Act (HB 1736 and SB 647)—that will require every school-age child in Illinois public schools to be introduced to homosexuality and cross-sex impersonation through mandatory “comprehensive sex ed.” To be clear, that’s every child from kindergarten on up and the indoctrination will take place every school year, increasing in detail each year. This will be in addition to all the other pro-“LGBTQ” material in which leftists are drowning children via the proposed “Culturally Responsive Teaching and Leading Standards”; the existing “LGBT” school indoctrination law; the homosexuality- affirming “anti-bullying” law passed in 2010; and the novels, plays, movies, essays, and articles teachers are already choosing to teach.

Every year the amount of time and number of contexts in which positive images of and ideas about homosexuality and cross-sex impersonation—topics that no adult other than parents should introduce to children or teens—grows. Leftists have been planting a dark, impenetrable forest while self-neutering conservatives fret about the trash tree they just bumped into and left standing. Can conservatives not yet see the forest?

Leftists have their gimlet eyes always focused on the big picture as they play the long game to rule the country. And they know the big picture depends on shaping the hearts and minds of children. While conservatives dismiss the “little” offenses and fume briefly about the big offenses against decency, morality, and truth, leftists continue their march through every institution that shapes culture, including our schools which create our future culture-makers—or as we learned in 2020, our culture-destroyers.

Illinois made the national press recently for the youth mind-grab called the “Culturally Responsive Teaching and Leading Standards” that require teacher-training/professional licensure programs, all in-house professional development, and all classrooms to be infused with leftist beliefs about race, homosexuality, and cross-sex impersonation. That amendment will be decided in just a few days by a rules committee in Springfield composed of twelve lawmakers and controlled by leftists.

Meanwhile, here comes the REACH Act, which will enable leftists to reach deeper into the hearts and minds of impressionable children to shape their feelings and beliefs about sexuality under the viperish guise of protecting children.

IFI warned parents about this bill when it was first introduced last year. If passed, this legislation will require leftist-created “comprehensive” sexuality indoctrination to start in kindergarten. Currently, sex education is not required in Illinois, but if it is offered, the only type of curriculum that can be used is leftist “comprehensive” sex ed. That’s thanks to a 2013 law. More on that shortly.

Here are some morsels from the REACH Act (highlighted in yellow):

Since when did it become the job of public school teachers to promote “awareness” of homosexuality and cross-sex impersonation? When did it become their job to promote “healthy attitudes” about homosexuality and cross-sex impersonation? Who decides what constitutes a “healthy attitude” toward these phenomena, and on what criteria are such judgments made?

Discussing human sexual anatomy in co-ed K-12 classes is yet one more way for our leftists to dissolve feelings of modesty in young children just as those feelings are beginning to develop. Leftists view that as a good thing. Discussions of “gender roles” and of “varying family structures” are ways of introducing little ones to “trans”-cultic beliefs and homosexuality.

No requirement that all competing views of “sexual orientation” be included or that criticism of “gender theory” be included.

No requirement that materials be presented that challenge the idea that all “gender-role stereotypes” are socially constructed and imposed.

No requirement that materials be presented that espouse the idea that “gender-role stereotypes” emerge organically from a recognition of sexual differentiation.

No requirement that materials be presented that discuss the possible ways “gender-role stereotypes” may serve a healthy cultural function.

No requirement that materials be included that argue that leftist gender theory is socially constructed and is being imposed on children with little to no public debate.

No requirement that materials be included that explain the serious health risks of chemical and surgical “treatments” to facilitate cross-sex impersonation.

No requirement that materials be presented on the social contagion that afflicts mostly adolescent girls called Rapid Onset Gender Dysphoria.

No requirement that materials on desistance and detransitioning be presented.

In other words, schools must express only one judgment on homosexual behavior, cross-sex identification, and same-sex parenting: approval. So, what happens when the next sexual lobby gets their sexual identity added to the lawbooks? What happens when polyamorists are successful in having “polyamory” included in law as a “sexual orientation” as they already seek to do?

Enquiring minds wonder why this bill does not include these words: “Comprehensive sex ed shall not use stigmatizing or shame-based instructional tools to stigmatize religiously based parenting and shall not implicitly or explicitly teach or promote views critical of religiously based beliefs on the nature and morality of homosexuality or cross-sex identification.”

The one good thing in the 2013 comprehensive sex ed law was that schools were left free not to offer any sex ed at all. That was then. This is now. The wolves waited for seven years, and then they pounced. Those little ones are so tender and tasty.

Last week, a video went viral of a justifiably enraged father taking a school board to task for the way his district was mishandling the education of children during the pandemic. Why haven’t there been an army of enraged fathers and mothers in Illinois taking school boards, administrations, and lawmakers to task for promoting evil ideas to their children? Why haven’t pastors and priests told parents that training their children up in the way they should go must never include even one positive teaching about homosexuality or cross-sex impersonation? Why haven’t churches made it possible for their members to remove their children from the ideological cesspools that self-identify as schools? Why are Christian teachers calling boys by female pronouns or saying nothing to oppose the sexual integration of children’s private spaces?

This is how leftists work:

Slowly they come, step by step, prepared for the wailing of conservatives, full of sound and fury, signifying nothing. Leftists bide their time, knowing the annoying sound and fury will shortly abate. Exhausted, conservatives will go home, abandoning all that messy, unpleasant opposition to the culture-unmaking of leftists. Conservatives won’t organize, won’t persevere, and won’t sacrifice. And the ones who do fight the evil-doers are alone and isolated because the masses of conservatives don’t want to do the hard work of culture-making.

There is no tiny sliver of the hearts, souls, and minds of Illinois school children that presumptuous Illinois lawmakers will allow to remain untouched by corrosive leftist beliefs on sexuality. And there is no child that presumptuous Illinois lawmakers view as too young to be exposed to those corrosive beliefs. Wail all you want, my conservative friends. Big Brother’s minions are patient. They’ll wait for the wailing to cease. They see in the distance a glorious time when wailing will be illegal.

Take ACTION: Click HERE to send a message to your state lawmakers to ask them to vote against the REACH Act (HB 1736 and SB 647). This radical sex education bill is heartily endorsed by Planned Parenthood of Illinois and by Illinois’ premiere “LBGT” activist organization, Equality Illinois, which should tell you everything you need to know about it.

Impressionable students in public schools should not be exposed to body- and soul-destroying messages that promote leftist beliefs about sexuality.