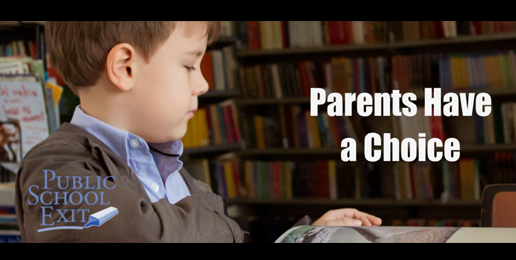 Children and families under siege in Illinois are getting a lifeline! A national organization working to rescue children from the increasingly radical indoctrination and sexualization in public schools recently announced a new partnership with the non-profit Illinois Family Institute (IFI) to help get as many kids out of the system as possible.

The nationwide group, known as Public School Exit (PSE), was formed last year by a team of concerned Christian leaders, attorneys, pastors, educators, and advocates. The goal: Facilitate an exodus of as many children into the safe sanctuary of homeschools and good private schools.

In pursuing that mission, PSE is joining forces with IFI — the state’s premier pro-family organization — to deal with the urgent situation in Illinois. From mandating LGBTQIA indoctrination in government schools to forcing teachers to accept and promote highly controversial “progressive” ideology in the classroom, the state is at the forefront of the escalating educational abuse in America.

“Illinois is one of the worst states in the nation when it comes to imposing anti-American, anti-Christian extremism on captive children in public schools,” said PSE President Dran Reese, a homeschool mom with many years of experience in ministry. “However, even conservative states are moving in that direction, so we hope the lessons we learn in Illinois will help in our nationwide efforts as well.”

As part of the partnership between PSE and IFI, which was formalized in early March with an agreement between the two, the well-respected Illinois organization will utilize PSE materials, its powerful line-up of experts in the field, and its own vast network to encourage pastors and parents to get children out of the deteriorating public schools.

“It’s high time for Christian parents and grandparents to recognize the fact that government schools are undermining and supplanting Judeo-Christian faith,” said IFI Executive Director David E. Smith. “The nonsense and profane values they are teaching students are the antithesis of what the Bible teaches us. Parents and grandparents cannot afford to allow these secular ideologies and destructive philosophies to mislead our children from what is good, honest and virtuous.”

Consider that the government’s own data from the National Assessment of Educational Progress (NAEP) prove conclusively that the overwhelming majority of children in Illinois are not even proficient in core subjects. Meanwhile, the moral values being imposed on children in public schools would shock most parents, IFI and PSE leaders said.

“Taxpayer-funded schools have all but rejected academics as their principal responsibility,” added Smith. “Instead, at the behest of Big LGBTQ Inc, BLM and Planned Parenthood, their focus has shifted toward indoctrinating our children. And children are being taught to hate America.”

Government school systems, Smith continued, are broken. “It’s time for parents and grandparents to take action to protect their children’s spiritual, mental and physical wellbeing,” he said. “It’s time to get our kids out of government schools.”

PSE and IFI leaders point to the Bible, which clearly instructs parents to teach their children Biblical truths “diligently” throughout the day, every day. (Deut. 6:4-9). Parents are also instructed to “train up a child in the way he should go.” “We dare not allow left-wing agents of deception do that training in our government schools,” noted Smith, celebrating the partnership with a well-established national organization to deal with the crisis.

On the church front, IFI and PSE will work together to help pastors and churches understand the problem. Then, they will work together with pastors and churches to help set up Christian schools, homeschool co-operatives led by parents, micro-schools, scholarship programs, independent learning academies, or other options to help protect the children in their congregations. PSE’s list of renown church and education leaders are standing by ready to assist.

“The Bible speaks very clearly to all these issues, and Christians across the nation are starting to realize that something must be done,” explained PSE Chairman Lt. Col. E. Ray Moore (Ret.), a longtime ministry leader who has been promoting a Christian “Exodus” from public schools for decades. “We are so grateful to be able to work with IFI — known as one of the top pro-family groups in America — on this critically important mission. The timing could not be better.”

PSE’s world-class team of advisors includes leading attorneys, educators, pastors, celebrities, and experts who — combined — have all the expertise needed to get the job done, and to do it well. With help from the boots on the ground, depending on the needs of particular communities or churches, PSE and IFI will assemble the necessary expertise to ensure that every parent in a congregation or community has options.

The team even includes, among other stars, Diane Douglas, who served as Arizona’s superintendent of Public Instruction until 2019, when she recognized that the government schools were now rotten to the core and were not safe for children. Now she is working to get victims out as quickly as possible. “Parents must act to protect their children, because public schools are not going to do it,” she explained.

The tide is rapidly shifting on this issue, too. Just in the last year, the number of homeschooling families has doubled from 5 percent to 10 percent of families with school-age children as people flee from government schools in unprecedented numbers. Some school districts have seen more than a 10 percent decline in enrollment as families seek other options.

Top voices are joining in as well. Before he passed away this year, talk-show titan Rush Limbaugh repeatedly urged parents to get their children out of public schools. Responding to LGBT mandates in New Jersey schools, evangelical leader Rev. Franklin Graham urged parents to withdraw from the system, too.

Even former President Donald J. Trump repeatedly urged parents to protect their children from what he described as “failing government schools,” noting that indoctrination in public education was responsible for the “mayhem” in America’s streets last summer.

Christian actress and leading homeschool advocate Sam Sorbo, a fervent campaigner on the issue and a member of PSE’s advisory board, celebrated the new partnership, too. “More and more people are waking up to the tragic state of what we currently call education, but what is, essentially, only schooling. Training. Conditioning,” Sorbo said in a statement about the news. “We welcome partnering with all enlightened organizations!”

Similar arrangements with other state-level pro-family organizations are already being explored. Many millions of families have already made the choice to pursue better education alternatives for their children. And in Illinois, that movement is about to be supercharged.

Special Events: Consider attending one of the eight events being held in different areas of Illinois beginning on June 28th. A complimentary meal will be served. Reservations are required. You can email Kathy HERE or call the IFI office at 708-781-9328. Reservations are due by tomorrow, so don’t hesitate!

How to Rescue Our Children

For Parents, Grandparents and Church Leaders