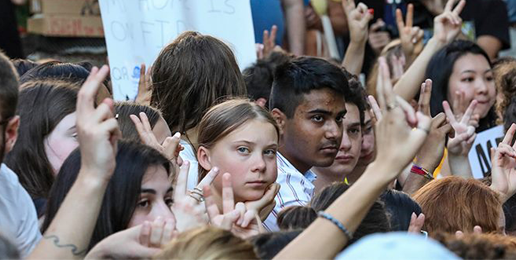 Greta Thunberg, in her latest opinion column for The Guardian, has called for an end to today’s business as usual. She believes current economic activity is a crime against humanity as it increases the global warming rate.

As a citizen of a developing country, I protest!

Greta and other schoolchildren camped at the World Economic Forum in Davos. Their primary objective was to peddle lies, demand economic suicide, and ridicule world leaders who are trying their best to uplift economies.

In her brief column, written as a forerunner to the World Economic Forum, Greta outlined her demands.

“We demand that at this year’s forum, participants from all companies, banks, institutions and governments immediately halt all investments in fossil fuel exploration and extraction, immediately end all fossil fuel subsidies and immediately and completely divest from fossil fuels,” she said.

“We understand and know very well that the world is complicated and that what we are asking for may not be easy,” she continued.

But in reality, Greta does not understand what she is demanding.

Almost all products we use in our everyday lives are made from or by means of fossil fuels. Yes! That includes your toothbrush, toilet seats, kitchen utensils, house paint, pens, mobiles (yes, your mobile phones and the rotating plastic toys that hang over infants’ cribs), computers, roads, vehicles, clothes, and thousands of other things that the majority of us—except forest dwellers—would not be able to live without.

Ironically, even Greta and her friends don’t live without them. The lettered placards used in their protests couldn’t have been made without fossil derivatives.

The boat Greta used to cross the Atlantic was also manufactured with the help of fossil fuels. Her recent train journey—about which she was caught lying—was also made possible only because of fossil fuels, even though the train was powered by what the company called “100 percent eco-friendly electricity.” Fossil fuels went into mining and transporting the minerals from which the steel of the cars and wheels and track were made, and into the composition and manufacturing of the plastics and most other materials in its cars.

Even worse, the very same energy technologies which Greta calls “clean”—solar and wind—are manufactured with the direct help of fossil fuels and fossil derivatives, besides releasing toxic substances into the environment.

Immediate, comprehensive disinvestment from fossil fuels would halt not just fossil fuel supply but the entire global economy. Even the countries that use the highest percentage of renewable energy cannot sustain their economies for a single week without the use of fossil fuel-based products.

More than 70 percent of the electricity consumed in China and India—for around 3 billion people—came from coal alone. Both these countries are adding more coal plants to their existing fleets, not shutting them down as Greta demands.

Given the extremely high inefficiency and costs of non-fossil fuel based energy sources, economies are nowhere close to increasing their dependency on “clean” energy. A call for disinvestment in fossil fuels is asking for humanity to cease functioning.

Not to forget, there are still 850 million people in the world (including hundreds of hospital patients in Africa) who do not have access to electricity at all—and many more whose access is highly unreliable.

Even without implementing any of Greta’s mind-boggling demands, the world is struggling to implement 100 percent electricity access in developing countries.

Greta herself enjoys the benefits of living in a developed country and continent whose economies were driven by the fossil-fuel based industrial era.

To turn a blind eye to those of us in developing countries, and those in much worse economic conditions, is certainly not admirable or praiseworthy. In fact, it is detrimental to the economic progress that billions in the developing world are aspiring to see in our lifetimes.

The mainstream media, especially the leftist leaning media from the West, must stop treating school dropouts like climate experts and economists.

In their sustained effort to promote climate alarmism, the positions Greta and the loony media are pushing might very well be destroying the hopes of those at the very verge of death in poor countries.