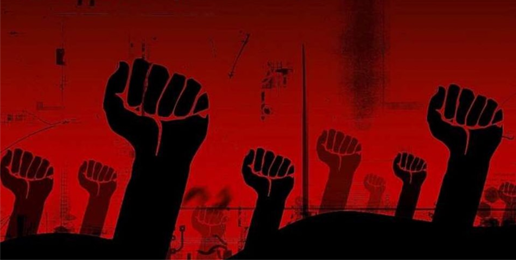 Many people complain about “socialist medicine,” or socialism in the schools. But what is socialism? It is frequently described as an economic system, but it also has some features of religion. This article shows how socialism qualifies as a religion.

What is a religion?

One definition of religion is “a cause, principle, or system of beliefs held to with ardor and faith.”  [i] Holding to a religion means being concerned with something outside of your mind that you can’t directly prove or touch, but for which you arrange your life in expectation that the “something” will occur (Heb 11:1).

Let’s examine and compare Christianity and Marxist socialism, focusing on these religious concepts:

Socialism has an origins story

Christianity: Christians understand right away how the universe came to be.

In the beginning God created the heavens and the earth (Genesis 1:1).

God is the beginning, before there was anything else. God was thinking and creating before He invented matter, light, space, time, heaven, or the earth.  His elect were chosen by Him before anything existed (Matthew 25:34; Ephesians 1:4). By His will, His word, everything that has been created was made (Psalm 33:6; Romans 4:17; Hebrews 11:3). And He didn’t use any preexisting stuff – if He had, then He would be a mere mechanic and not truly God Almighty.

Socialism: Socialists work hard to prove that “the Cosmos is all that is or was or ever will be.” [ii] That philosophy is Materialism, which claims life, consciousness, and thought exist only in beings having a body.

“Materialism is the belief that nothing exists apart from the material world (i.e. physical matter like the brain); materialist psychologists generally agree that consciousness (the mind) is the function of the brain. Mental processes can be identified with purely physical processes in the central nervous system, and that human beings are just complicated physiological organisms, no more than that.” [iii]

Socialists must feel insecure about this concept, for they write many articles trying to define what thought really is and where it comes from. [iv] Their big payoff with Materialism is that it makes God impossible. If thought requires a body then God didn’t create everything, but would merely be part of this physical universe.

Compare: The Bible says that God designed and created the universe. Through this act He has authority to tell His creation the meaning of right and wrong. He is not dispassionate, creating things and leaving them alone. [v] Rather, God intercedes in the universe, in human history, all of the time.

Socialism says that the universe (matter) is all that there ever was, and that there is no God, neither as creator or as lawgiver. Rather, human history has evolved from primitiveness to the present conditions where socialism is about to take over. [vi]  There are no grounds for compromise, no way to be both a devout Christian and faithful socialist. You must choose one master or the other (Matthew 6:24).

Socialism has a heaven

Socialism: Karl Marx, whose writings define modern socialism, claims that human society will transform from capitalism through socialism into true communism. [vii] Global communism will be the final state of humankind, and in it we will all be happy and prosperous. Marx wrote:

“In a higher phase of communist society, after the enslaving subordination of the individual to the division of labor, and therewith also the antithesis between mental and physical labor, has vanished; after labor has become not only a means of life but life’s prime want; after the productive forces have also increased with the all-around development of the individual, and all the springs of co-operative wealth flow more abundantly – only then can the narrow horizon of bourgeois right be crossed in its entirety and society inscribe on its banners: From each according to his ability, to each according to his needs!” [viii]

In this communist heaven there is no government, or need for it, for everyone does the right thing by nature. Production of everything works so efficiently that you’ll have to invent things to fill out your day.

The socialist heaven is reached when everybody on earth freely gives their skills and labor for the benefit of the community, expecting only that the community will meet their own needs. Everyone will be generous, honest, trustworthy, and gracious – so much so that government, even police, won’t be needed any more. [ix]

In brief, the transformation to communism requires that everybody fully gain the virtues that the saints achieve only when God’s renews them after the Judgment Day, in His new creation. But socialists can’t accept that, for religion is “the opium of the people” [x] and its morals oppress the working class.

By tossing religious morals, and the authority behind them, socialists make it impossible for society to reach the moral state needed for universal communism. George Orwell was right when he said:

“If you want a vision of the future, imagine a boot stamping on a human face – forever.” [xi]

Socialism: Socialists agree that society needs morals. They merely reject your morals, for they are meant to oppress the “working class.”

“ACCORDING TO the German socialist and philosopher Karl Vörlander writing in the early twentieth century, “The moment anyone started to talk to Marx about morality, he would roar with laughter.”

I don’t know whether Vörlander’s story is true, but there is certainly plenty to laugh about when our rulers talk about morality. Almost invariably they use it as a way of promoting their own interests, pretending they are acting for the common good or for the benefit of humanity.

But it is hard to believe that morality is nothing more than ruling-class ideology.” [xii]

But even socialists don’t yet know what socialist morals should be.

“So while Marxism sees a basis for morality in shared human nature, while society is divided into classes, there can be no universal morality. Nevertheless, by fighting for its own interests, the working class makes it possible for such a morality to emerge.” [xiii]

Compare: Through study of the Bible Christians are assured that they can know God’s mind on good behavior. But socialists can’t say what morality will be in the workers’ paradise, only that it will become evident once their society is implemented. However, we can briefly look at what has been said, and has been done, in over a hundred years of socialist practice since the Russian Revolution.

Socialist morals are thus convenient and ever-changing. Because they are unable to generate the perfect man that would take mankind into communist perfection, a socialist misery would go on for a long time.

What about non-Marxist socialism?

Although Marxist ideas predominate socialist theory, it wasn’t always so. Socialist writers and experiments predate Karl Marx. [xix] How would a non-Marxist socialism differ from what was just discussed?

So Marxist socialism robs people of their property, enslaves them by demanding their labor and not rewarding them for their work, and brainwashes them into thinking that there is no God, no eternal. Non-Marxist socialism merely afflicts people with the first two evils.

However, non-Marxist socialism is merely an academic exercise. There is too much Marxist teaching, and too many people trained in it, to keep any attempted socialism free from Marxist-influenced thoughts and practices. Socialism and Marxism are forever joined at the hip.

Some people still hope to reach a compromise, a Christian Socialism. [xx] That combination won’t work, for Christianity is all about the worship of God while socialism utterly denies God and His right of rule. One socialist reflects:

“Incidentally, the Socialist Party of Great Britain took a unique position on the subject of religion in the SPGB’s 1910 pamphlet: SOCIALISM AND RELIGION. The SPGB stated that religion was not a private affair and that anyone who held religious views could not become a member of the organisation. The pamphlet stated:

No man can be consistently both a Socialist and Christian. It must be either the socialist or the religious principle that is supreme, for the attempt to couple them equally betrays charlatanism or lack of thought.” [xxi]

You can’t serve two masters at the same time (Matthew 6:24). You can’t be both a Christian and a socialist.

So socialism is a religion – what about it?

So now you’re convinced that socialism is actually a religion. What can you do with this new understanding? Try these things that are easy to remember and do.

Don’t lose your soul. While studying socialism, you might get sucked into arguments so thoroughly that you question your faith. When all that you have in front of you are their books, and perhaps their friends, it is easy to lose sight of God and his wisdom. If you study socialism and Marxism, take time frequently to reflect on your studies, researching what God has said.

Watch your language. Do you consider yourself part of the “working class?” Congratulations, you’ve accepted socialist terms and arguments into your thoughts. There is a truism that says if you can define the terms of the debate you’re half way to victory. Here is a short list of terms frequently used by socialist propagandists.

If you’re using these phrases in your speech or writing, ask yourself why. Is it force of habit? Or do you need to unlearn things?

Check it out. When you’ve just been promised wonderful things, such as free college or universal health care, check out who else thinks that these promises are is a good thing. You have the internet, so use it and find your answers. The most interesting places to find agreements will be sites run by socialists or Marxists. If they like something then you know that the thing must be examined more carefully. Know something by its proponents. Know someone by the company he or she keeps.

Put your money where your faith is. Once you’ve educated yourself, act on your knowledge. When you find a candidate belongs to the Fabian society, and you’ve learned what that implies, don’t vote for him anyway because he has a nice family. And when someone says she will implement Marxist plans, believe her. Don’t think that she will be OK because she’ll moderate over time. Rather, become a good deed doer.

[iv]    One such dissertation is Mikhailov, Feliks, The Riddle of the Self, Chapter 2, section 3 (The End of the Mind-Body Problem), 1976, found online at https://www.marxists.org/archive/mikhailov/works/riddle/riddle2c.htm

[ix]    “Criminal activity will be almost nonexistent since the catalysts for anti-social activity—injustice and inequality—will no longer exist.”, from https://www.allaboutworldview.org/marxist-law.htm

[xi]    Orwell, George, Nineteen Eighty-Four, 1949. The quote can be found online at https://en.wikiquote.org/wiki/Nineteen_Eighty-Four#Chapter_3_3

[xvii] A Woman Resident in Russia, The Russian Effort to Abolish Marriage, The Atlantic, July 1926, https://www.theatlantic.com/magazine/archive/1926/07/the-russian-effort-to-abolish-marriage/306295/

Oliver Perry
Oliver has lived in Illinois for decades.  He wasn’t born here, but got here as fast as he could.  He found his bride at church and still adores her.  Together they’ve raised three children to successful adulthood. Oliver sees that even today the Bible speaks authoritatively on society, its government and its laws. He hopes that through these articles you will be encouraged to also think along these lines....
Full bio and more from Oliver Perry
b
a
x
r