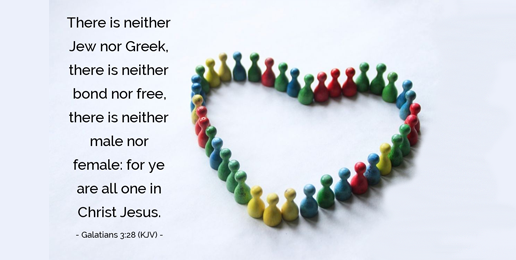 In April 1963, Martin Luther King Jr. wrote his letter from the Birmingham Jail. In it, he argued that “there are two types of laws: just and unjust,” King went on: “A just law is a … code that squares with the moral law or the law of God. An unjust law is a code that is out of harmony with that moral law.”

“Segregation, to use the terminology of the Jewish philosopher Martin Buber,” contended King, “substitutes an ‘it’ for a ‘thou’ … and ends up relegating persons to the status of things [such as a color or a race].

“Segregation is morally wrong and sinful. Sin is separation … and segregation is an existential expression of man’s tragic separation, his awful estrangement, his terrible sinfulness.”

In other words, what King was clearly saying was this: When you divide what should be united, you are not an integrationist. You are a segregationist. And you are guilty of sin.

Voddie Baucham, dean of Theology at the African Christian University in Lusaka, Zambia, says it this way,

“The concept of race is not a biblical idea; it is a constructed idea. You won’t find the idea of races in the Bible. [In Scripture], we are all the race of Adam. One race, one blood … The separations we have created — the racial categories — are artificial … They are not real … Racial distinctions are things that we have made up to divide ourselves … But the all-sufficient Word of God says to us, ‘That’s a lie, stop believing it!’”

The take-home from both King and Mr. Baucham is this. We are made in the image of God. He designed us and defined us, and when we compromise His description of who we are — when we hyphenate our identity through our contrived definitions and divisions — we not only compromise the dignity of man but also denigrate the very definition of God.

“There is ONE body … and ONE God. For in Christ … there is neither Jew nor Greek … You are all ONE [emphasis mine] in Christ Jesus.”

In Genesis 1:27, we are told that “God created man in his own image, in the image of God he created him …” Moses is very clear. God did not say he created humanity and then divided us by categories. All men and women are created as a singular race that is a direct reflection of the unity of triune God himself. There is absolutely nothing here that suggests otherwise.

In the “moral law of God,” there is no black and white. There is no such thing as a hyphenated human being. There is no such division. The only definition of man that we have in the Bible is that God created us as a unified “thou,” not a bunch of divided “its.”

Any segregation of this image — of the Imago Dei — into separate categories based on the “color of one’s skin rather than the content of one’s character” is “an existential expression of man’s tragic separation, his awful estrangement, his terrible sinfulness.”

The enemy of human dignity and human freedom knows this. He knows that all that’s necessary to conquer us is to divide us from each other and divide us from God.

Our nation’s seal says E Pluribus Unum and not E Unum Pluribus for a reason.

United, we stand. Divided, we fall.

The consequence of abandoning this truth is always anarchy, not freedom. Lies always result in more and more bondage and less and less liberty.

Remember this in November.

Never vote for anyone shouting diversity rather than unity.

Never vote for anyone marching for “us” vs. “them.”

Never vote for anyone who focuses on black vs. white; the 99 percent vs. the one; the proletariat vs. the bourgeoisie.

Never vote for anyone who implies that some “lives matter” and others don’t.

Never vote for anyone who is “out of harmony with the moral law of God.”

Never vote for dividing and segregating the Imago Dei.

Never vote for anyone who waves the banner of the “it” vs. the “thou.”

Such people care little for those they claim to defend. They only care about power.

Such people know that if they can divide us, they can control us by manipulating our anger, resentment and our desire for revenge.

Martin Luther King Jr. knew this. He understood not only the lessons of Scripture but also those of history. He knew that a message of division and retaliation rather than one of unity and repentance always brings the “guillotine” and blood flowing in the streets.