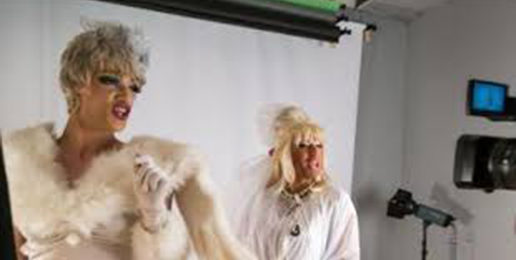 From the time I was nine, my father decided he was a woman. He became “Becky.” Sort of.

The truth is no amount of hormones or cosmetic surgery could change my dad into a female. Of course, not even a simulated tampon could change his natural biological sex. His DNA still said male in every cell. No matter how much make-up, cosmetic surgery, and dresses he wore, my dad was a male who, after all, had fathered children with my mother. That is reality.

We are in the cultural grip of what the American Psychological Association celebrates and champions: creating a genderless society at the cost of reality. Glamour magazine recently naming Caitlyn Jenner its 2015 “Woman of the Year” is only the tip of the iceberg. So society continues down delusional lane by reinforcing unhealthy ideals of gender and favoring a pretend world of identity politics that manufacturers gender-confused children. These children are being pushed to reject their bodies as biologically male or female. Instead, they’re being told to choose a range of gender fantasies.

It is telling that media’s most celebrated transgender boy, Jazz Jennings, told Cosmopolitan: “A lot of transgender individuals are attracted to mermaids and I think it’s because they don’t have any genitals, just a beautiful tail.”

Mermaids are neither real nor human. This is a make-believe world that tells children never to grow up, and to live forever in their fantasies.

Americans can no longer believe that this issue will not affect them personally. It already does. Hollywood produces shows such as “Becoming Us,” “Orange is The New Black,” “Jazz,” and Bruce Jenner’s reality show to make sure they come into your living room. Many Americans are naïve to the bigger implications behind the transgender movement, which destabilizes the family unit.

Just look at what’s happened in Oregon. Legislation there allows 15-year-old children to have sex reassignment surgery without parental consent, even though these children would need their parents’ consent to get a tattoo, smoke, or donate blood. Lori Potter of Parents Rights and Education says, “This is trespassing on the hearts, the minds, the bodies of our children. They’re our children. And for a decision, a life-altering decision like that to be done unbeknownst to a parent or guardian. It’s mindboggling.”

These kinds of laws and bills should be considered child abuse. Especially when 70 percent to 80 percent of those kids will spontaneously lose those feelings, according to Paul McHugh, the former chief of psychiatry at Johns Hopkins University and one of the few honest voices on this. Meanwhile, the rest of the medical profession enthusiastically embraces this idea, alongside the big pharmaceutical companies.

The media shuts up any messages that counter the one the message that Caitlyn Jenner conveys on the cover of Vanity Fair. We’re just supposed to accept as fact that one can go from being a 60-year-old man to a 20-year-old pinup despite biological reality, genetics, and the lack of a backward time travel machine. Reality these days is whatever a person can imagine and pay for. And whatever culture applauds.

Here is the truth I lived. No matter what surgery or hormones one takes, his or her biology, neurology, and genetic composition remain the same, just like that of my dad’s. Yes, he called himself Becky. But my dad was male. He was a son, husband, and father.

The goal of the transgender movement is to destroy reality, which destroys childhood, as well as families, wives, children, and parents. What is left in its place is the media’s “new normal.”

The human costs to the individual and the family are real. Parents are essentially being told their son Henry never existed, but that instead they have a daughter, Heather. And Henry’s wife needs to accept her same-sex marriage, which is not what she had intended when she married Henry. Not only does this try to dismiss the purpose of male and female bonding, it also demands that everybody continuously role-play in the transgender’s personal delusion.

On the most basic level, children are left abandoned to search out other male role models because their own father is busy playing Rita Hayworth. The family also learns that now their new daughter Heather has found an entire community of other folks who are celebrating her as a brave hero and demonizing her entire family. Heather is essentially cut off as this new community gains control and reinforces the delusion. That’s what cults do.

Don’t be fooled. This is all about gaining control of the minds and bodies of children.

Jenner recently teamed up with fellow transgender writer Jenny Boylan, another former white guy, now a professor at Barnard, a women’s college. They talked dating for People magazine. Jenner is looking. Boylan, in the spirit of “sistahood,” warned: “It’s a thing that women do. We look to men to give us self-worth.”

We have officially stepped off the precipice of reality and are in a postmodern sexual identity politics free-fall. More postmodern indoctrination into imagining a male sexual fetish is really “just like civil rights,” People says. Has anyone ever seen a 68-year-old woman discuss “dating” in a national magazine? No. So why do people buy into this?

The sexual identity crowd is doing what they called in the 1960s a mind game. According to the transgender lobby, sex and gender are way different—completely different. And in the new world order, the more confused you stay, the better for media-generated propaganda campaigns.

Here’s the difference: gender is a cultural and social construct, which includes behaviors, attributes, and social responsibilities people assume as either male or female in the culture. On the other hand, sex is biological.

Media, popular culture, and the LGBT lobby all seem to be telling us we have it all wrong about sex and gender. Not only are we wrong, but we are also “ignorant” and “bigoted” unless we accept their correction. Correction: a 68-year-old male is now telling women about how authentic men are when they claim to be women.

The New Normal Is Disordered

Until very recently, people who were distressed about their gender saw responsible psychologists, therapists, and medical professionals who by and large accepted biology over the person’s feelings or “identity.” Something has changed. We have been forced to conflate gender and sex. In truth, it is an organized effort.

We have an adult sexual identity movement using confused children to obscure their adult male sexual fetish. One desired result of this ad campaign is that we exaggerate any and all gender confusion to make it seem more common, then make sure people celebrate this as “the new normal.”

Let’s remember the old normal. As parents we know children role-play. They play superheroes and cartoon characters. They play house and doctor. In today’s climate, this can be dangerous. Children who simply role-play by transgressing gender roles are immediately swooped up and given this new diagnosis of gender dysphoria.

Adult transgenders, on the other hand, suffer from a disorder of assumption. We see this in middle-aged men, fathers and husbands who claim to be “women” despite the fact that they were born male and lived as men. There is no scientific evidence to support this person’s “assumption that they are different than the physical reality of their body, their maleness or femaleness, as assigned by nature.” McHugh has explained this very well.

Of course, a female transgender (born male) child does not experience biological female maturity. They do not menstruate or mature into women. They are given, while still children, puberty blockers to suppress their inherent male traits and hormones. This becomes the first step on the life-long road of cosmetic surgeries and pharmaceuticals.

United Media Publishing recently satirized the transgender craze with a write-up about a line of pretend feminine hygiene products for the man who identifies as a woman. The spoof ad for “Fem-Flo” may strike many realists as hilarious. But guess what? Such a product may very well appeal to a transgender who desires the sense of having a period. Someone living in that fantasyland could take the following words from that mock-up very seriously:

Our product is designed to give post-op trans-gender women the full-spectrum experience of menstruation. You don’t have to be deprived of the beautiful and womanly occurrence of menstruation merely because you were born without uterus.

Read on, and the idea becomes darker. You may be horrified to have to think in terms of what “post op” really means:

The ad copy describes this tampon-like product as “a cotton core that contains a small, vegetable-based capsule which upon reaching body temperature releases the ‘menses’ contained within.”

This concept may have started out as satire. But it’s not any more. So now, by legal degree, woman is defined as a feeling a man has.

Denise Shick is author of “My Daddy’s Secret,” “When Hope Seems Lost,” and “Understanding Gender Confusion.” She serves on the academic council of the International Children’s Rights Institute and directs Help 4 Families Ministry.

This article was originally posted at TheFederalist.com