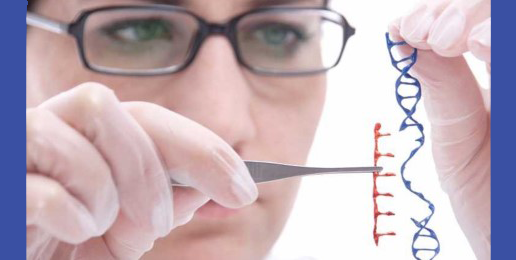 That’s the title from a recent New York Times piece highlighting last month’s successful modification of DNA in a human embryo by scientists for the first time in the United States.

The scientists were able to “edit” a known disease-causing mutation at life’s earliest stage in order to prevent the disease from manifesting later in the person’s life. With this sort of “germline” editing, a person’s DNA is not only permanently altered to prevent the contracting of a particular disease, but those mutations that cause the diseases would no longer be inherited by successive generations.

This means that we’re talking about the potential for significantly benefiting (or harming) the human race not just today, but in perpetuity. Talk about power and influence. The possibilities are seemingly endless to the imaginative and the motivated.

Of course, it doesn’t take long for inquisitive minds to wonder: If we can harness scientific methods to prevent “bad” traits, couldn’t we use the same methods to enhance “good” or “preferable” traits – like height, intelligence, skin or eye color, etc.? (Hence, the term “Designer Baby”) And couldn’t this create a number of foreseeable problems?

Not to worry, say the “scientists,” because doing those things would be really hard since modifying other traits is more complex. So for that reason – and that reason alone, apparently – permanently altering human embryos for purposes other than eliminating disease-causing genetic mutations is “highly unlikely” to occur.

But as the saying goes: “Power corrupts, and absolute power corrupts absolutely.” Meanwhile, it’s hard to think of a scenario in which one person possesses more absolute power over another person than when the latter consists of only a few cells under a microscope, created by the former in a lab for the purposes of scientific experimentation. If human nature holds true, we can be certain, then, that no matter how much “good” may come out of this kind of “genetic engineering,” by man’s corruption that good is destined to be far outweighed by its as-of-yet incomprehensible destruction of human life.

Let’s think about this: When was the last time someone said “that’s just too complex” and everyone else simply responded “well, I guess there’s no use even trying then”? That’s just not the America I know. No – we’re the ones who resolve to put a man on the moon (and bring him safely home) within a decade for little more reason than because we don’t want the Russians to get there first! Do you suppose the Russians – who seem to have even less regard for human life than Americans – might be thinking at this very moment how they could harness this science to create a form of genetically-modified super-human for a superior military force, for example? I’d be surprised if they weren’t already working overtime to make it a reality.

“Highly unlikely,” my foot. Not only is the experimentation, exploitation, abuse and destruction of innumerable human lives highly likely to occur if we continue any further down this path of embryonic gene editing. It’s a guaranteed certainty.

“Scientists” can predict whatever they want about what humans will do in the future, but as long as they ignore history and human nature, they’ll always get it wrong. And as long as we as a society fail to respect the value and dignity of every human life, we will continue to justify mass carnage upon the human race by dressing it up with words like “abortion,” “death with dignity,” and most recently, “embryonic gene editing.”

This article was originally posted at FamilyFoundation.org