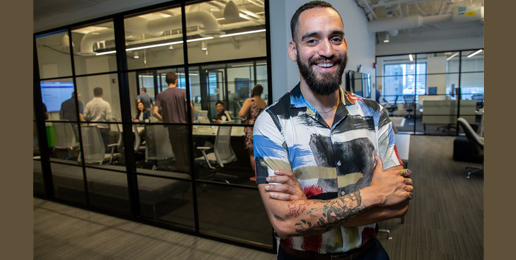 Chris Rosario, content director at IBM Cloud, is seen at his office in Chicago on July 19, 2019. Rosario describes himself as gender queer and is part of a volunteer mentoring group that pairs managers with LGBTQIA employees to promote understanding. (Zbigniew Bzdak / Chicago Tribune)
Chicago Tribune Cheers Gender-Neutral Workplaces
Written By Wendy Wilson   |   08.16.19
PRINT

A conservative meme circulating on Facebook recently asserted that a dystopian future isn’t in the future. It’s now and we’re living it.

For theologically orthodox Christians, and others who want to stay grounded in reality, the West has rapidly become a disorienting place to live. So, a surreal article in the Chicago Tribune July 31 portraying workplace accommodations for “gender queer” and “nonbinary” employees as perfectly normal shouldn’t come as a surprise, even if it induces nausea.

It’s the kind of article that makes you despair not only about the collapse in traditional norms surrounding male and female but also about the state of journalism. Written by a Tribune business reporter, the article is headlined “He, she or they: How companies are starting to address calls for a gender-neutral workplace.” Devoid of critical thought, the article reads like a press release from an LGBTQ advocacy group. It’s fully sympathetic to those who “describe themselves as identifying as neither male nor female, identify as both, or reject gender labels entirely: gender fluid, gender neutral, gender queer or gender nonconforming.”

The reporter, Corilyn Shropshire, an experienced journalist with a master’s degree in social policy from the London School of Economics, apparently could think of no valid concerns about “nonbinary” employees causing tension and confusion in the workplace by insisting, among other things, that they be referred to individually with the pronoun “they,” correctly used to refer to more than one person. The angle Shropshire took with her story was that all challenges posed by those who are “gender queer” should be met by catering to their whims. She wrote,

Redefining a workplace as some employees redefine themselves has meant challenges on both sides of the desk. For nonbinary workers, it’s explaining who you are to your bosses and colleagues and getting them to understand it, accept it and use the right pronoun. For employers, it’s making the office an environment that is accepting of nonbinary employees and in turn, changing workplace dress codes, the company directory, personnel manuals and longstanding forms that require employees to check off boxes identifying them as “male” or “female.”

What’s especially disconcerting is that at a paper the size of the Chicago Tribune, a story like this one goes through multiple layers of brainstorming and editing. No one thought this piece came across as lacking in how it presented a controversial issue? The story quotes not a single soul who finds pandering to “nonbinary” employees to be a troubling development.

The story quotes only proponents of “gender queer” accommodations, including an associate professor of history at Amherst College who complains that “human resources practices are usually very binary” and that for those who are “nonbinary,” “there’s not even a place for you to exist in the (HR) system.” But HR practices have historically been binary because they correspond to reality, that reality being that we are created male and female, and except in the cases of rare birth defects, the differences are obvious.

There also used to be an understanding that one’s personal proclivities and habits had to sometimes be put aside for the good of the organization, at least during work hours. Today the self reigns supreme, especially when it comes to sexuality, and all must bow down before it. The demands of “nonbinary” employees are so absurd that in a sane world such employees would be told to knock it off or encouraged to get help. That the business world and mainstream journalists now see such demands as legitimate is a disturbing sign that too many influential people in our culture are losing their minds. It’s not just those personally identifying as “gender queer” who are sick. It’s also their enablers.

The Tribune article relates the story of Avery Matthew, a young woman who takes testosterone and works at Brilliant Staffing in Chicago. She pouts that “some colleagues still stumble over the appropriate pronoun to use” even though she’s been out as “nonbinary” for more than two years. “It becomes emotionally exhausting to have to correct people,” she says. But has Matthew tried thinking of her coworkers, who might be exhausted by having to remember during their busy day to use different pronouns with her or risk being labeled insensitive or worse? The reason it’s hard to remember is that it’s unnatural. The natural thing is to refer to people by words correspond to their objective, unchangeable, true essence as men or women. It wears on people to be forced to a participate in a lie when there are many other stresses in the workday competing for their attention.

Matthew is also upset that there are no gender-neutral bathrooms at work. She uses both, but wants one she can “walk into without worrying about people’s reactions.” But of course there is one–the women’s restroom. Why can’t the female essence of her “gender fluidity” be content with that during work hours? What’s the big deal if she at least partly identifies as female? Unfortunately, the Tribune had no interest in digging deeper and pondering how immaturity and self-absorption might play a role in the weird and nonsensical demands of the “gender queer.”

Al Mohler, president of the Southern Baptist Theological Seminary, addressed gender confusion on his podcast The Briefing Aug. 9, calling on Christians to stand firm against calls to abandon reality. He said:

Christians have to speak sanity even if no one else does. It’s because our understanding of humanity and of identity begins with God, begins with a Creator who made us for his glory, who determined not only where and when we would be born, but that we would exist, putting us on this earth and giving us an identity as his gift. Of course, there is some extent to which every single individual develops a self and develops personality, but that is fundamentally different from understanding that we determine our own identity.

Too bad the Tribune didn’t see fit to give this perspective at least a passing mention. It’s one many Americans still hold, even if the Tribune treats them as if they don’t exist.