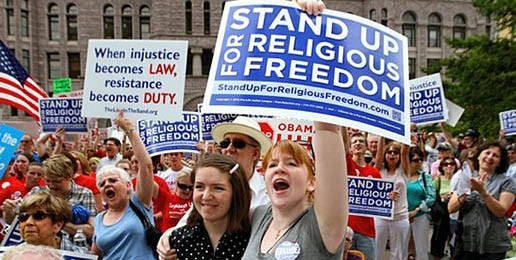 Analysis: 8 Reasons Conservative Christians Are Concerned About Their Own Religious Freedom in the Obama Era
04.09.15
PRINT

Some conservative Christians have long been warning that same-sex marriage presents a danger to the religious freedom of those Christians who believe true marriage can only be between a man and a woman. Those who sounded those warnings were accused of sensationalism; they were only making those claims to fan the flames of opposition to SSM, it was said at the time. We now know that they were right all along. SSM supporters who only a few years ago claimed that SSM would not infringe upon anyone’s religious beliefs are now openly defending government coercion of SSM opponents.

Wedding vendors, like photographers, florists and bakers, have been on the front lines of these religious freedom battles. Even though there are plenty of wedding vendors not opposed to serving a same-sex wedding, and the brides or the grooms have usually stated that they preferred vendors who support SSM, there have been several instances where conservative Christian wedding vendors have been punished for declining to serve a same-sex wedding. In some cases, the punishments are so severe that these vendors will not only be put out of business but their life savings will be wiped out.

If those in powerful political positions believe that those opposed to SSM should be forced to choose between violating their religious conscience or personal financial ruin, they cannot be counted on to defend the religious freedom of conservative Christians.

Additionally, since SSM supporters lied about their support for religious freedom when they were pushing for passage of gay marriage, what are they lying about now? Churches will not be required to perform gay weddings, they say; pastors who denounce homosexuality will not lose their tax-exempt status, they say, or be imprisoned for hate speech, they say; but why should they be trusted? How far do liberals want to go in their use of government force to infringe upon the religious freedom of conservative Christians?

In their 2015 book, So Many Christians, So Few Lions: Is There Christianophobia in the United States? sociologists David Williamson and George Yancey document anti-Christian hostility among certain liberal activists. While these activists are small in number, they tend to be powerful elites, which provides them with much cultural and political influence.

Through interviews with some of these anti-Christian liberals, Williamson and Yancey reveal what conservative Christians have long felt to be true: there are influential people, in politics, the media and entertainment, who despise them and wish to marginalize them as much as possible.

For a preview of what could be next, look to Gordon College and Brendan Eich.

Gordon’s president, D. Michael Lindsay, signed a letter to President Barack Obama asking him to include a religious exemption in his employment non-discrimination executive order. The exemption would not have benefited Gordon College directly and it was the same exemption that was already passed by a Democratic-controlled U.S. Senate. Additionally, the letter was also signed by Obama supporters and was organized by Michael Wear, who had worked for the Obama’s White House and his 2012 election campaign.

Despite all that, Gordon has been targeted because the Christian college has a conduct policy that bans sexual relations between same-sex partners. A Massachusetts city terminated a contract with the college, and it is being investigated by its accreditor.

Brendan Eich was forced out of his job as the CEO of Mozilla because he had donated $1,000 to a campaign in support of an amendment to California’s state constitution to define marriage as between one man and one woman.

Both of these cases could be a preview of things to come. Will Christian colleges guided by Christian principles lose their accreditation? Their tax exempt status? Will their students be denied government aid? Will Christians opposed to SSM be allowed to hold any high profile jobs?

The notion that those with religious objections to SSM should not be given religious freedom can also be seen in last week’s reactions to the Religious Freedom Restoration Act.

RFRA was strongly supported by both liberals and conservatives in the 1990’s when it was first passed at the federal level in reaction to members of the Native American Church who were punished after they used peyote, an hallucinogenic drug, as part of a religious worship service. After realizing that RFRA also protects conservative Christians, not just religious minorities, liberals have begun opposing it.

Most of the media coverage last week about RFRA has failed to inform the public of why the law is important. Worse still, the media has misinformed about what the law actually does.

On Thursday, liberal Washington Post columnist Eugene Robinson called for the repeal of all RFRA laws. Similarly, in a Wed. op-ed for The Daily Beast, Michael Tomasky denounced RFRA and argued that those whose religious beliefs are opposed to SSM should not be provided any legal accommodation.

New York Times reporter Josh Barro once said that SSM opponents are “unworthy of respect” and should be “ruthlessly” stamped out. While these statements might be dismissed as the ravings of a wacky liberal, and unrepresentative of most liberals, the reactions to his statements are telling. If Barro had made those statements about any other group of people or point of view (blacks, gays, service members, Muslims, etc.), there would have been a national uproar, he would have been expected to offer an apology, and he may have even lost his job. Instead, The New York Times did nothing.

Other liberals have explicitly argued that gay rights and the religious freedom of conservative Christians cannot coexist in the United States.

Chai Feldblum, a Georgetown University law professor who was appointed to head the Equal Employment Opportunity Commission by President Barack Obama, argued in a 2006 interview that liberals should demonstrate a “respectful awareness” of the views of conservative Christians, then added that this view does not represent the majority in her community of fellow liberals. Additionally, she said that when religious liberty and sexual liberty conflict, “I’m having a hard time coming up with any case in which religious liberty should win.”

In a January op-ed condemning RFRA, liberal New York Times columnist Frank Bruni argued that he favored a “live and let live” position while simultaneously arguing for government coercion of conservative Christians. And in a Friday op-ed, Bruni wrote approvingly of a gay philanthropist who told him that conservative Christian leaders “must be made ‘to take homosexuality off the sin list.'”

“But in the end, the continued view of gays, lesbians and bisexuals as sinners is a decision. It’s a choice. … So our debate about religious freedom should include a conversation about freeing religions and religious people from prejudices that they needn’t cling to and can indeed jettison, much as they’ve jettisoned other aspects of their faith’s history, rightly bowing to the enlightenments of modernity,” he wrote.

Conservative Christians would prefer the liberals like Bruni honestly state their position up front rather than wrap their intolerance in the language of tolerance.

After Indiana passed a state RFRA, the liberal press needed a bogeyman, so they went looking for one.

The story quickly went viral across liberal news sites and was cited as evidence that RFRA encourages discrimination against gays. RFRA, though, had nothing to do with it. Memories Pizza does not cater weddings. It does not deny service to gays. A reporter simply showed up and asked them how they would feel if asked to cater a same-sex wedding. As a result, the owners had to close the business and go into hiding due to death threats.

Scouring liberal news sites, one can find little sympathy for the owners of Memories Pizza, however. (See here for one notable exception.) Conservative Christians look at that and wonder how saying you’re opposed to SSM became worse than threatening someone’s life.

President Barack Obama’s indifference to the beliefs of conservative Christians has also been a cause of concern.

Through its birth control mandate, the Obama administration tried (and continues to try in some cases) to force those with religious objections to pay for certain types of birth control, some of which could even cause an abortion.

Besides the fact that Obama did not seem to care how some religions felt about birth control, the move illustrated that he has a narrow view of what religion is. The religious exemption attached to the mandate only applied to a narrow set of groups. Houses of worship were protected, soup kitchens were not. Religious freedom is only for what happens behind the four walls of a church, synagogue or mosque, Obama was saying.

Conservative Christians believe their faith should apply to what they do seven days a week. If you’re only willing to give them religious freedom on Sunday morning, you’re severely limiting their religious freedom.

Republican leaders cannot be relied upon to defend the religious freedom of conservative Christians because, as last week’s events show, they become wimps whenever the issue of homosexuality enters the mix.

One might think that religious freedom would be easy to defend, given that it is contained in the first words of the Bill of Rights and America has a long history of promoting religious freedom. But when Republican leaders catch even the slightest whiff that they might be accused of being anti-gay for supporting a policy, they quickly fold.

This cowardice was on display, for example, with Republican Gov.’s Asa Hutchinson, Arkansas; Mike Pence, Indiana; and Rick Snyder, Michigan.

Hutchinson decided not to sign RFRA, he says, on the advice of his son, a 31-year-old government employees union organizer. Pence signed an amendment to his state’s RFRA that would make it more difficult to bring religious freedom claims to court. And, not to waste time, Snyder announced he would veto RFRA even though his legislature hasn’t even passed it.

These governors were cowering, in part, to certain large companies, like Angie’s List, Apple and Walmart. It is OK, apparently, for large companies to act upon their convictions in opposing a religious freedom law, but a small family-owned shop opposed to SSM must be put out of business.

If you still do not understand why conservative Christians are concerned about their own religious freedom in the Obama era, I encourage you to check out the reactions to this article.