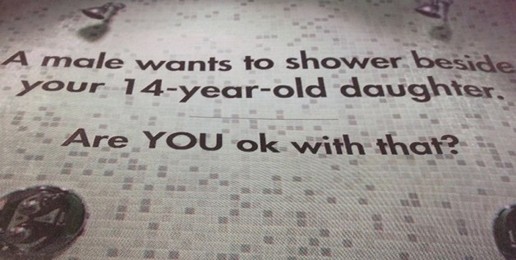 A Brief Word About the Incoherence of “Transgender” Locker Room Policy
Written By Laurie Higgins   |   10.14.15
PRINT

IFI’s opposition to, for example, a boy in a girls’ locker room is not based on fear that he may rape a girl—though that, of course, is a possibility.

Rather, our opposition emerges from the fact that physical embodiment per se has meaning. The fact that a gender-rejecting boy IS a boy has meaning for both him and the girls whose privacy he seeks to invade.

The desire for separation in locker rooms and restrooms grows out of objective biological and anatomical differences. Those differences are meaningful, and the desire for privacy and separation should be respected. The fact that a man thinks he feels like a woman (he can’t really know if he feels like a woman because he’s not a woman), or wants to be a woman, or thinks he was born in the wrong body does not change the fact that he IS a man, and women shouldn’t have to change their clothes in his presence or engage in showering or toileting in his presence. There is no difference between being forced to change clothes in the presence of a man who accepts his body and being forced to change in the presence of a man who rejects his body—none.

Not deep desire; cross-dressing; name-changes; puberty-blockers; cross-sex hormone-doping; universal compulsory misuse of pronouns; or even mutilating surgeries can turn a boy into girl. And both privacy and modesty, which derive from immutable, meaningful differences in physical embodiment, must be respected.