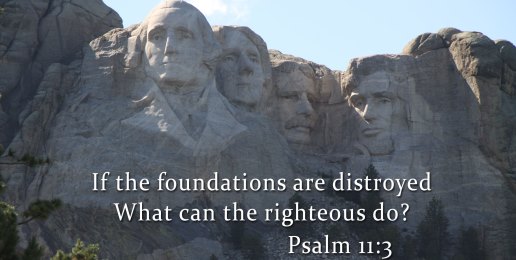 Christ’s famous “render unto Caesar that which is Caesars’s and unto God that which is God’s” came out of the Pharisee’s attempt to pit Him against Rome.  Resistance to paying taxes was a punishable crime.  Christ’s words underscored the principle He had established in Creation of submission to authority, for all authority originated in Him.  His main point was that both government and God have spheres of authority to which we all must yield.

We conservatives are constantly assailed for violating the so-called “separation of church and state” when we speak out or involve ourselves in issues such as welfare, abortion and same-sex marriage.  But, I would make one thing clear: those who throw up the “separation” argument know very well they are radically distorting it; but, regardless, be it known that when the government treads on God’s turf, we will not be silent.  If our government were occupying itself only with those things that are appropriate for civil authorities we conservatives would be relatively silent.  But, beginning decades ago politicians began breaking down the barrier between government business and religious/cultural business by intruding into the family, undermining this most fundamental building block of a civil society and destroying the lives of women and children.

By providing economic resources, for example, from the public purse for single mothers without making distinctions between those who were genuinely victims of tragic circumstances and those who were making bad life choices the government gave de facto approval for immoral, sinful behavior.  These destructive government programs expanded wildly over the years to where tax payers are now supporting a host of immoral activities under the guise of “compassion.”  If I, as a father, did to my own children what our government has been doing to millions of poor children, I would not only be a failure as a father, I would be guilty of child abuse before God.

The destruction that has been unleashed upon children in America, whether it be by our tolerating immoral behavior, abortion, no-fault divorce, the expansion of gambling, radical feminism or now, same-sex marriage, is beyond unconscionable and ought to be criminal.  We understand that there are difficult situations where solutions for those involved are elusive.  But, as someone has wisely stated, “hard cases make for bad laws.”  We are told that children are resilient, as if it is morally acceptable to injure them deeply so long as they recover, sometime.  But, we would never tolerate conduct of this nature toward ourselves!  Can you imagine the  wave of anger that would erupt if an investment company advertized that their careless loss of customers’ funds was acceptable because clients would likely recover most of their losses in a few years?

It is clear that the Left, for all their talk of compassion, care mostly for the pleasures of the moment and buying political power.  The direction they have driven this nation, by the arts, government programs, and liberal religious institutions reveals that they are not victims of “unintended consequences.”  They simply don’t care what their actions do to others, even children!  It is no accident that while they speak of compassion, the real life consequence of their choices is a nation strewn with the carnage of broken families, emotionally scarred children, aborted babies, and a culture reeking of corruption and wickedness.  Good intentions never justify destructive policies.

When Christ walked this earth He blessed the children and noted that any who offended them would be better off with a mill-stone hanged about their neck to be cast into the sea.  He spoke rhetorically, of course, but He was reaffirming Old Testament pronouncements of God’s personal love for children.  So long as American culture and government actively wage war on children, treading on these objects of God’s very personal love we Christian conservatives will not, and cannot, be silent.