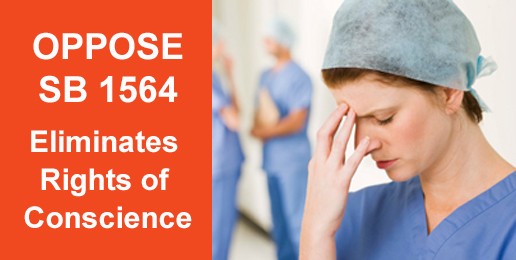 Prof. George: An Open Letter to the Illinois Legislature
05.12.15
PRINT

To the Members of the Illinois Legislature:

I understand that you are considering passing SB 1564, a bill to amend the existing laws of Illinois that protect freedom of conscience. I urge you not to do so, as SB 1564 fatally weakens the conscience rights of Illinois citizens.SB 1564 would amend existing law to, among other things, add a new section regarding “access to care and information protocols.” This section would require “health care facilities, physicians, and health care personnel” who are opposed for reasons of conscience to performing an abortion to, nevertheless, “refer, transfer, or give information . . . about other health care providers who they reasonably believe may offer . . . the . . . service,” which includes abortion. In so providing, SB 1564 violates elementary notions of conscience protection.The point of conscience protection is to shield a person from being forced to participate in something that he or she finds morally wrong — perhaps, as in the case of abortion, gravely so. Accordingly, Illinois’s existing law states: “It is the public policy of the State of Illinois to respect and protect the right of conscience of all persons” regarding “medical services” whose morality is disputed. There is no more disputed “medical service” than abortion.

How might one be forced to participate in a “disputed medical service”? One way, of course, would be to require that the objector perform the procedure. The proposed revision of the law does not go that far, but that does not mean that it is modest or moderate. Requiring the objector to refer (or to transfer) the person to a different medical provider who will perform the abortion is radical and unacceptable because it implicates the objector in the obtaining of the disputed “medical service.” It makes her or him a participant, that is, one who facilitates the procedure by assisting in its being obtained. It overlooks the simple point that the objector finds the procedure to be morally wrong and wishes not to be associated with it.

The truth of the point I am making can be shown by imagining a different situation, one in which racial segregation in public accommodations was legal but not mandated, and imagining further that some restaurants segregated their clientele by race but that others did not, believing that doing so would be morally wrong. Imagine further that a law were passed requiring that any restaurant that did not segregate nevertheless tell anyone who asked where to find a segregated restaurant. Clearly such a law would make the non-segregating restaurant owner a participant in facilitating the underlying wrong to which he or she objected (racial segregation). Would anyone conclude differently if the law, instead, required the restaurant owner to provide a list of restaurants that the owner “reasonably believed” were segregated? The owner would be right, and consistent, to point out that this violated his conscience every bit as much as requiring him to segregate his restaurant. The same is true in the case before you. It makes no difference whether referrals or transfers or “reasonable” lists of abortion providers are required of those who object to abortion – in each case, the result would be coercing them through the power of the law to facilitate a procedure they find profoundly morally objectionable.

Conscience is the very citadel of the soul. One’s conscience enables one to make basic decisions about right and wrong. To violate it is to violate an individual’s personal integrity in the most fundamental way. Thus, the right to freedom of conscience has been recognized everywhere, from the Universal Declaration of Human Rights to Vatican II’s great declaration on religious liberty, Dignitatis Humanae. Cardinal John Henry Newman called conscience, written in every human heart, “the aboriginal vicar of Christ.” One need not be Catholic to understand that robust protection for freedom of conscience is the mark of a just society. Since SB 1564 fatally undermines conscience protection, I urge you to reject it.

Take ACTION: Click HERE to send an email or a fax to Gov. Bruce Rauner to ask him to VETO SB 1564.  Ask him to uphold Rights of Conscience for medical personnel.

If You Care About Children and America’s Future, Keep Your Kids Out of Public Schools
b
a
x
r