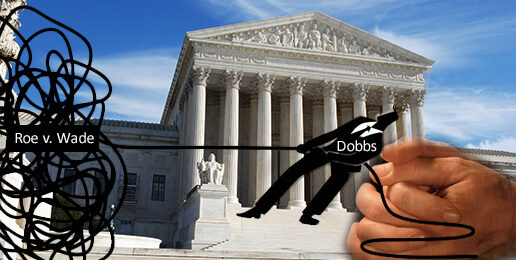 Mississippi Attorney General Lynne Fitch headed up the pro-life position. Attorneys had 30 minutes to argue their points. This landmark case provides an opportunity to present medical evidence on the development and viability of the unborn child that was not available in 1973 and has the potential to overturn Roe v. Wade and Planned Parenthood v. Casey.

Over 100 amicus briefs have been filed from both sides, including one on behalf of Illinois Family Institute. These briefs are read by the Justices prior to oral arguments and have the potential to touch their hearts on the importance of their decision.

In an October article for First Things, Princeton University law professor Robert P. George predicts that the U.S. Supreme Court will–and should–decide that there is no constitutional right to elective abortions:

As I write—as you read—unborn children are being slain. As a practical matter, Roe and Casey must be reversed before any of these children can enjoy the full protection of the law. Abortion will not end overnight. Some states will continue to permit the procedure until the Court ­acknowledges that the unborn possess the right to life. Even women who live in states that prohibit the procedure will be free to cross state lines. But we know that even modest obstacles save lives. The denial of federal funding for elective abortions is estimated to save some sixty thousand unborn children each year. So let us be frank. There is a cost to delay, and that cost comes in innocent lives.

Please pray fervently today as the nine Justices of the U.S. Supreme Court hear and consider the arguments regarding significant abortion restrictions in Mississippi. Pray that God would touch the hearts of the Justices, their clerks, and the media covering the case. As the debate rages, pray too that eyes and ears would be opened to the abortion industry’s barbaric practices.

We urge you to please fast and pray today:

(A decision on this case is not expect to be issued until June, 2022.)

7 Things to Know About the Dobbs Abortion Case Now Before the U.S. Supreme Court