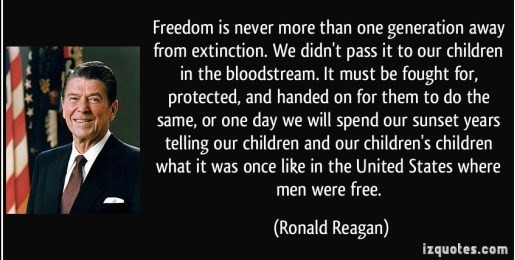 Why We Must Defend Religious Liberty

In Appleton, Wisconsin, Marge Christensen labors tirelessly to share the Gospel. In her eighties, Marge is active in her church and has been promoting biblical citizenship for more than twenty years. She and her husband are ambassadors for the Alliance Defending Freedom and have been working lately to encourage churches to promote marriage with greater boldness.

Recently, Marge shared with a colleague of mine that churches do not seem to sense the urgency of teaching on matters of marriage, family and especially religious liberty.

A friend of mine, you may have heard of him, Rick Santorum, shares Marge’s concerns. After a long and illustrious career in politics, Rick has taken over as chief executive of EchoLight Studios with the goal of bringing top-notch and redemptive media to a darkened culture.

EchoLight’s latest documentary film, “One Generation Away,” draws its inspiration from Ronald Reagan’s famous inaugural address as California’s 33rd governor. In it, Reagan warned: “Freedom is a fragile thing and is never more than one generation away from extinction. It is not ours by inheritance; it must be fought for and defended constantly by each generation, for it comes only once to a people. Those who have known freedom and then lost it have never known it again.”

Several of the cases examined in the movie are familiar to us. There’s the decades-long battle to remove the large cross from the Mt. Soledad Veteran’s Memorial in San Diego. And then there’s the coercive healthcare mandate that sought to force businesses like Hobby Lobby to violate Christian conscience and pay for abortion-inducing drugs.

But what makes “One Generation Away” so interesting and valuable is that it interviews leaders on both sides of the issue. Along with a great cast of stalwart defenders of religious freedom like Mike Huckabee and Ryan Anderson of the Heritage Foundation, you’ll hear from members of the ACLU and Americans United for the Separation of Church and State—people who are leading the crusade to restrict religious expression in public life.

And as I myself say in the film (and yes, I was privileged to take a part in it), to preserve our freedom we have to know what our liberties are and what they aren’t. And we have to defend them—and that requires knowing our opponents’ arguments and intentions.

Part of the task will be reminding our fellow Christians that we believers have full rights of citizenship. Too many of us have bought into the idea that religion is purely a private matter. God forbid! As Vincent Munoz of Notre Dame said so well in the film, “Just as other citizens can bring their convictions into the public square, religious citizens can and should bring their convictions into the public square. Don’t you lose your rights because you’re religious!”

Folks, the lesson of “One Generation Away” is that vigilance in defending our freedoms is not a one-time task, but a sacred trust that we pass from generation to generation.

This is why I hope you will get your church to host a screening of “One Generation Away”—and please get your friends and neighbors to attend. Come to BreakPoint.org and click on this commentary. We’ll link you to the movie’s website so you can learn how your church can premiere the movie at no cost to you or your congregation.

Folks, we’ve got to do something. And this is something we can do. I hope you’ll do it.