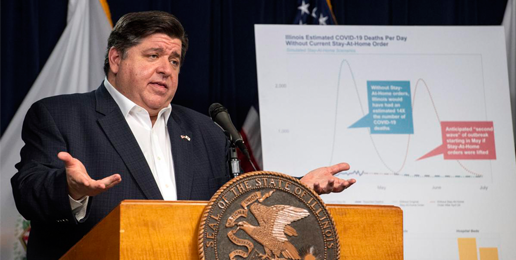 Churches Can Open Their Doors Again!

Just hours after sending out an email to the IFI Prayer Team, we received word that Gov. J.B. Pritzker had lifted all restrictions on churches in the state. (We have amazing prayer warriors!!) Peoria area attorney Brian Heller put the development more succinctly:

We won, or more accurately, the Gov. retreated from the field of battle facing likely humiliation.

Rockford area attorney Austin Scott Davies reports that this announcement came “shortly before the 8:00 PM deadline given to Pritzker by the U.S. Supreme Court to respond to Elim Romanian Pentecostal Church and Logos Baptist Ministries emergency temporary restraining orders, filed on their behalf by Liberty Counsel.”

“Suddenly,” Mr. Davies pointed out, “the Governor’s threats and intimidation have turned into ‘recommendations,’ that churches are not obligated to follow.”

Gov. Pritzker and his legal team must have realized that his executive orders would be struck down by the High Court, as his orders abrogated the First Amendment civil rights of millions of Illinois citizens. We can thank God for a system of checks-and-balances for putting an end to this abuse of authority.

The good news is our churches are now open for worship! Mr. Davies points out, “There are no executive orders or Department of Health regulations that prevent every last church in the State of Illinois from holding service this Pentecost Sunday, and there is no limit on the number of church-goers that can attend a service.”

Please continue to pray as a number of lawsuits against the governor’s Executive Orders are still pending. We would still like to secure a judicial ruling striking down this tyrannical precedent so that the state of Illinois may never have to experience this again. As I’ve said before, it doesn’t take much foresight to realize how similar future orders could be mandated (and extended) in the name of “safety.” In fact, this point is clearly articulated in a press release sent out from our friends at Liberty Counsel:

“Liberty Counsel will file a reply to the Supreme Court arguing that Gov. Prtizker’s unconstitutional orders are capable of repetition yet evading review. Also that his supposed voluntary cessation of these orders on churches does not moot the case, because as he unilaterally issued the orders and aggressively enforced them, and now repealed the church restrictions, he could just as easily reinstate them.”

Read more about this victory HERE.

If you are interested, the new “guidance” from the IDPH can be viewed HERE.