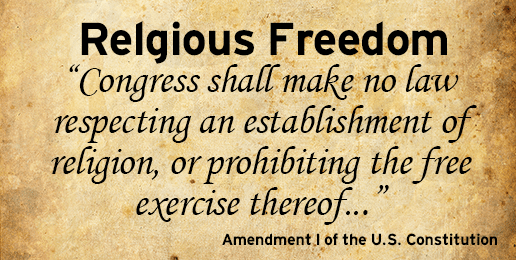 Earlier this month, the U.S. Supreme Court once again affirmed that the so-called “wall of separation” that exists between church and state is not quite the edifice that liberals would like it to be.  In Town of Greece v. Galloway, the court ruled today that a village in upstate New York did not violate the First Amendment in allowing members of clergy to begin town board meetings with prayers, some of which were explicitly sectarian (and usually Christian) rather than ecumenical. The narrow vote along the usual 5-4 conservative/liberal lines is bound to incite many on the left to express fears about the court trying to turn the U.S. into a “Christian nation.”

But in upholding the rights of Greece, N.Y. to have meetings begin with a religious invocation, the court has done no such thing. Rather, it has simply affirmed a long American tradition of beginning public meetings with prayer. Even more to the point, by refusing to be drawn into the question of regulating the content of such prayers, the court has preserved religious liberty rather than constricting it. The decision also provides a timely reminder that for all the talk about separation walls, the main point of the First Amendment is to preserve freedom of religion, not freedom from any mention or contact with faith.

In recent decades, the “separationist” position on church/state interaction has grown more, rather than less, aggressive. In its 1962 Engel v. Vitale decision that banned public school prayers, the court rightly ruled that school districts had no business imposing what were often sectarian prayers on children. Given that students were not free agents who could accept or reject these prayers with impunity, it was clear that the practice could easily be considered an “establishment” of a state religion that is prohibited by the First Amendment. But purely ceremonial affairs such as invocations before legislative proceedings cannot be reasonably interpreted in the same light. Since, as Justice Anthony Kennedy noted in the majority opinion, such prayers go back to the First Congress and have been repeatedly upheld since then, any attempt to overturn these precedents was unwarranted.

It is true that for any member of a minority faith or for atheists, the repeated use of Christian prayers at Greece’s public meetings might be tedious or possibly offensive. But in the absence of a more diverse group of local clergy in this hamlet not far from the shores of Lake Ontario, the town’s choices were between either censoring the prayers of local clergy who were willing to take part or eliminating the practice. Clearly there are many on the left who would have been comfortable with the former and well pleased with the latter.

But what must be acknowledged is that being put in a position where one must listen to the prayers of another faith is not a violation of one’s constitutional rights. A ceremonial prayer, like the words “In God We Trust” on our coinage, does not transform our republic into one with a state religion. So long as those participating in such gestures are not attacking other faiths or those who do not believe in religion, their words are not an establishment of religion or impinge on the freedom of those listening. Adults at a town board meeting are not like schoolchildren in a closed class. They can join in the prayer or not at their own pleasure with no fear of punishment.

At the heart of this issue is the notion that any expression of faith in the public square is a violation of a vast mythical wall that some believe must completely separate religion from state. But while the Founders explicitly and with good reason forbade any one sect, denomination, or faith from being empowered by and identified with the state, they did not intend the First Amendment to be used as a shield to prevent Americans from any contact with religion. To the contrary, they saw faith as having an important role in preserving a democratic nation and a civil society.

There may have been a time when religious minorities and non-believers felt that the identification of the state with the faith of the Christian majority resulted in discriminatory practices that compromised their rights. But what is at stake here are not cases of bias or religious rule but rather the desire of some to be insulated from expressions of faith, and that is a privilege that the First Amendment does not provide them.

As we have seen with the efforts by the Obama administration to restrict the rights of religious believers in the Hobby Lobby case concerning the ObamaCare contraception mandate, there is a not inconsiderable body of opinion that would like to promote a cribbed definition of religious liberty that would be restricted to prayers in houses of worship or private homes. But Americans have always defined religious freedom in a more open and expansive manner that allowed them to practice their faith on the public square rather than only in private. It is that rich legal tradition that the court has upheld in Town of Greece. Though only a narrow majority is defending that principle on the Supreme Court at present, it is one that is well worth preserving.

This article was originally posted at the CommentaryMagazine.com website.