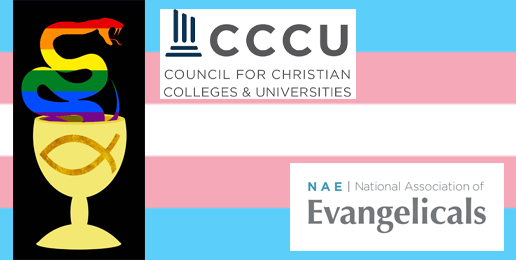 In a blog post titled “‘Fairness For All’: Smart Politics, Or A Sellout?” (Dec. 13), Rod Dreher, senior editor at The American Conservative,  reports a defense of the recent decision by the boards of the Council for Christian Colleges and Universities (CCCU) and the National Association of Evangelicals (NAE) to support “sexual orientation” and “gender identity” “federal antidiscrimination law in exchange for religious liberty guarantees written into the same law.” The defense was made by “a prominent conservative Evangelical political strategist who works at both the national and state levels” and whom Dreher calls “Smith.” Rod himself professes to be unsure about the whole subject; an uncertainty that appears to be fueled by his usual belief that voting Republican changes nothing.

The substance of the defense is essentially born of naïve utilitarianism, overlaid with a veneer of high rhetoric about standing up for the “rights” of LGBTQ persons. In effect: We are losing the battle over human sexuality in the culture so, while we still can, let’s cut a deal with proponents of all things “gay” and “transgender” that gives us something in return. They will (allegedly) recognize our good will and then become favorably disposed to protect our “religious liberties” in both the short- and long-term.

The problem with the argument is that it amounts to a policy of appeasement with sexual extremists who advocate (from our perspective) a grossly immoral sexual policy and have never exhibited a “we’ll stop here approach” before. It is an appeasement that requires us to sacrifice our basic principles to get some statutory assurance that can easily be retracted by legislative vote after a full-court indoctrination surge, predicated on the new law, overwhelms remaining resistance. In addition, it is an appeasement that provides only the narrowest of exemptions for religious institutions while throwing under the bus the vast majority of Christians who work and live outside those institutions.

It requires us to sign our own persecution warrant by conceding on a federal level that homosexual practice, “gay marriage,” and sexual mutilation surgery are (as Houghton College President Shirley Mullen, who sits on the boards of both evangelical organizations argued in a position paper) “basic human rights.” Elevating these high acts of sexual immorality to the status of “human rights” in turn slanders reasoned moral arguments against such acts as virulent prejudice akin to racist views.

It gives jurists and legislators the ammunition they need to dismiss any remaining Evangelical resistance to a program of coerced indoctrination and enforcement as inconsistent residual bigotry rather than an instance of rational moral conviction. As Lydia McGrew has pointed out,

[T]his could sabotage any attempt to get an even clearer baker/florist, etc., religious liberty ruling from the Supreme Court in a subsequent case…. A *federal* law enshrining “public accommodations’ non-discrimination rules for sexual orientation could be just what would influence someone like Kavanaugh and possibly others to reverse course rather than going more clearly in the direction of the Masterpiece [Cake] ruling.

Once Evangelical “elites” support special “sexual orientation” and “gender identity” legislation they have conceded (whether they know it or not) that a man having sex with another man and a man subjecting himself to voluntary castration and adopting a female persona are honorable life decisions deserving full government promotion and support.

When the Czechs were compelled to give up the Sudetenland in the Munich Agreement of 1938 in exchange for a contractual assurance of German respect for their sovereignty, they gave up the most defensible and defended part of the country, relying solely on the “good will” of someone who had shown absolutely no previous interest in respecting territorial boundaries. LGBTQ advocates won’t be rounding us up in concentration camps to be gassed, to be sure. Yet they will continue to press for the elimination of every last vestige of “homophobia” and “transphobia” in society by every and any legislative and judicial means. By their own rhetoric they will still regard as hateful ignorant bigots on the level of the Klu Klux Klan, all the more given new federal “anti-discrimination” legislation from which we now seek immoral exemption.

Evangelicals who think otherwise are foolish in the extreme, giving our enemies the club with which to beat us and then taking them at their word that (for the moment) they won’t beat us with it. Then why give them the club in the first place?

According to Smith, “pluralism is about accommodating deep difference” and that requires Evangelicals to “accommodate sexual minorities” and to acknowledge the latter’s “rights.” It is evident already in Smith’s own language that he has given up the store. He has appropriated language of “minorities” and “rights” previously associated with the cause for African American civil rights and applied it to the “LGBTQ” agenda. By definition, then, any resistance to that agenda is “heterosexist” and “cis-sexist.”

Race is about an intrinsically benign, non-behavioral, and immutable facet of human existence. Don’t confuse rhetoric rightly used to support the cause of racial justice with rhetoric that promotes desires (however innate) to do things at fundamental odds with one’s biological design. Contrary to what Smith claims, it is not part of the “common good” to provide special rights for such behavior that will invariably lead to severe state indoctrination and attenuation of both freedom of speech and the free exercise of religion (whatever exemptions we are briefly granted in the law by LGBTQ powers for our detestable prejudices). Smith says that “gay people have a right to be wrong.” They already have that right. What they want is the right to compel others to do things that violate conscience.

Pluralism has its limits. Would Smith apply the same argument to Evangelical hostility against polyamory and adult-consensual incest (these too involve “sexual minorities” and questions about “rights”)? In a pluralist society must we eventually accommodate these “deep differences” too once there is a societal push for such acceptance? How could he possibly argue otherwise given the fact that moral logic predicates opposition to such behavior on a male-female prerequisite for sexual relations and the integrity of a biologically based sexuality, an opposition now surrendered in the public sphere?

Homosexual practice and transgenderism are not “run of the mill” sexual offenses. They are extreme sexual offenses that attack the very foundation of all sexual ethics. The CCCU and NAE want us to promote legislation that honors and protects such behavior and provides the legal reasoning for coercing acceptance in the whole population.

Smith even admits that LGBT activists believe that

Donald Trump’s victory in 2016 dealt a powerful blow to their hopes…. Now they have Gorsuch and Kavanaugh, and Justice Ginsburg aged and frail. LGBT strategists believe that the likelihood of litigating their way to preferred policy outcomes is low under this Court.

Then Smith argues that, despite this perspective, our cause is hopeless because Trump and a Republican-led Congress haven’t done everything in two years. He completely ignores the fact that we haven’t lost federal ground in the sexuality wars and are on the road to strengthening materially our position vis-à-vis the Court without having to surrender our moral convictions in the public sector.

I don’t think they’re doing it as a bad-faith stalling tactic.

How ridiculous. Every political example points in the direction that LGBTQ activists will continue their inexorable pursuit of stamping out homophobic and transphobic prejudice (so-called) by all means necessary. These Evangelical appeasers have the “innocent as doves” demeanor down but not the “wise as serpents” part. California moved from outlawing sexual orientation “change therapy” on the part of licensed clinicians for minors to five or six years later making a concerted effort to outlaw it for adults on the part of pastors where an exchange of funds is involved. LGBTQ politicians will push their agenda to the bitter end.

Once we abandon the moral conviction that homosexual and transgender immorality are not “human rights” requiring state promotion, we have no basis for opposing our further persecution. Bigots (in the thinking of LGBTQ activists) are not entitled to exemptions in the long run for a bigotry that harasses “sexual minorities” and induces suicide attempts. LGBTQ activists won’t think us to be any less bigoted because of our surrender. They will simply view us as conviction-less and unprincipled bigots who deserve what is coming to them.

Most galling of all is that Smith even cites the Golden Rule to justify his position:

In Smith’s view, in a pluralistic society like America 2018, ‘do unto others as you would have them do unto you’ is a good rule for religious liberty advocates and gay rights supporters alike.

Jesus didn’t formulate the Golden Rule to provide special legal protections for, and promotion of, immoral behavior. He formulated it to encourage us to act in the best interest of others rather than to engage in vengeful behavior as a response to wrongs committed against one’s self. Since no true Evangelical can possibly believe that self-dishonoring homosexual behavior and attempted erasure of one’s biological sex are positive goods in the best interests of the practitioners, no Evangelical can support the kind of legislation that the CCCU and NAE are now endorsing.

With this kind of reasoning on the part of Smith, it is little wonder that he wants to remain anonymous.

Robert A. J. Gagnon is Professor of New Testament Theology at Houston Baptist University. He has a B.A. degree from Dartmouth College, an M.T.S. from Harvard Divinity School, and a Ph.D. from Princeton Theological Seminary. His main fields of interest are Pauline theology and sexual issues in the Bible. He is a member both of the Society of Biblical Literature and of the Studiorum Novi Testamenti Societas [Society of New Testament Studies]. He is the author of The Bible and Homosexual Practice: Texts and Hermeneutics (Nashville: Abingdon Press, 2001; 520 pgs.); co-author (with Dan O. Via) of Homosexuality and the Bible: Two Views (Minneapolis: Fortress Press, 2003; 125 pgs.); and, as a service to the church, provides a large amount of free material on his website dealing with Scripture and homosexuality.