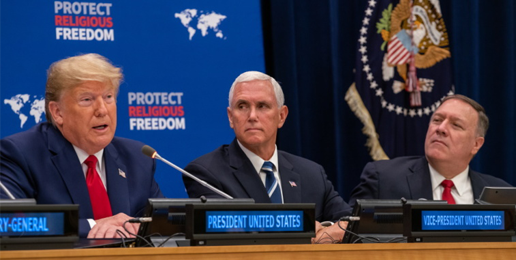 In June, 2016, when candidate Trump promised a large gathering of evangelical Christian leaders that he was committed to defending our liberties, I was skeptical. Was he just trying to get our votes? Did he really care about our freedoms? Was he truly concerned that our rights were being eroded?

For more than two years, he has answered those questions emphatically. Yes, he is committed to defending our liberties. Yes, he really does care about freedoms. And yes, he is truly concerned that our rights are being eroded.

Now, the president has gone one step further, standing up for religious freedom worldwide.

As he said in an important UN gathering,

“Today, with one clear voice, the United States of America calls upon the nations of the world to end religious persecution. Stop the crimes against people of faith. Release prisoners of conscience. Repeal laws restricting freedom of religion and belief. Protect the vulnerable, the defenseless, and the oppressed.”

For whatever reason, this has become something very important to Trump, and as one who works with persecuted believers in different parts of the world, I can affirm that this is highly significant.

It is also historic. As widely reported online, “Donald Trump has become the first US President to ever host a meeting at the United Nations on religious freedom.”

But this time, he didn’t only draw attention to persecuted Christians, although he did mention that “11 Christians a day [are killed] for following the teaching of Christ.” (To my knowledge, this is an easily verifiable, if not very conservative, number).

Trump also spoke of Muslims and Jews who were killed for their faith:

“In 2016, an 85-year-old Catholic priest was viciously killed while celebrating mass in Normandy, France. In the past year, the United States endured horrifying anti-Semitic attacks against Jewish Americans at synagogues in Pennsylvania and California. In March, Muslims praying with their families were sadistically murdered in New Zealand. On Easter Sunday this year, terrorists bombed Christian churches in Sri Lanka, killing hundreds of faithful worshippers. Who would believe this is even possible?”

Why this deep concern from the president?

It’s clear that Trump has gained a deep respect for evangelical Christians in recent years. And he seems genuinely troubled that our rights have come under attack here in America. How much more, then, would he be concerned when he learns that thousands of Christians worldwide are being slaughtered for their faith every year?

At the same time, his daughter Ivanka is a convert to Judaism, and his son-in-law Jared, along with their children (his grandchildren) are Jewish. And I believe he was truly horrified at the two synagogue shootings where Jews were mowed down in cold blood, right here in America.

And, as much as he is (wrongly) painted as an enemy of all Muslims, he must also have been troubled at the slaughter of Muslims in a mosque in New Zealand.

In that light, it’s no surprise that he is leading the way in the call for religious freedom worldwide.

Let him use his bully pulpit to call out religious oppression. Let him use the power of his office (and the force of his personality) to rebuke tyrannical governments.

But this is where the rubber will meet the road.

Two of the chief offenders today are China and India. Is the President willing to rebuke these governments directly? Is he willing to confront China’s Xi and India’s Modi?

[On Tuesday], September 24, Trump suggested that Modi be referred to as “the father of India” because of his success in uniting the nation.

And while Trump is engaged in trade wars with Xi, he has not as aggressively confronted China’s massive crackdown on religious believers in China, be they Muslim, Christian, or other.

It is true that, after North Korea, the next eight countries where it is most dangerous to be a Christian today are all Muslim. But India is now number 10 on that list, earning a ranking of “extreme persecution” from Open Doors World Watch List 2019.

Consequently, “For the first time since the start of the World Watch List, India has entered the top 10. Additionally, China jumped 16 spots, from 43 to 27.” And based on inside information I have received from China, it will soon be climbing high on that list.

And, when we remember that these are two massive countries, totally nearly 2.5 billion people between them, the implications of these religious crackdowns are massive.

Yet there are many who believe that Trump has the power to tell Modi to put a stop to this, and he will do it. And perhaps, through economic and other means, Trump can pressure China to change as well.

Let’s hope and pray that this is so. If anyone has the courage to stand up to these powerful leaders, I believe it is Donald Trump.

And when it comes to fighting against religious oppression worldwide, but friend and foe of the president should wish him Godspeed in this battle.