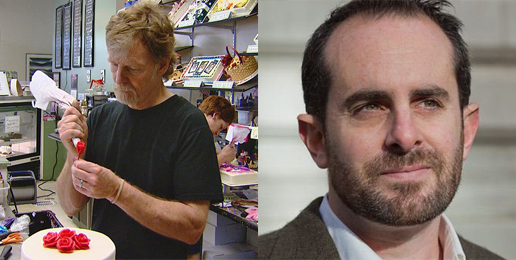 Legal affairs columnist at The Daily Beast, Jay Michaelson, has offered the dumbest idea yet to solve the problem of homosexual couples trying to force Christians to provide goods and services for their faux-weddings.

Michaelson, who writes on “law, religion, and sexuality,” is a graduate of Columbia University and Yale Law School, which provides clear evidence that intelligence and prestigious educations provide no bulwark against foolishness.

Michaelson is also an “affiliated assistant professor at Chicago Theological Seminary,” a “teacher of meditation in a Theravadan Buddhist lineage,” and openly homosexual with a special interest in “queer theology.”

Focusing on the case of Jack Phillips, the Colorado baker whose case before the U.S. Supreme Court starts next week, Michaelson proposed this:

All Masterpiece Cakeshop has to do is state that they only provide wedding cakes for weddings that take place at certain churches (and, if they like, synagogues and mosques). Don’t turn people away based on their identities, or the type of wedding they’re conducting. Turn them away based on the place where they are getting married…. That leaves the discrimination up to the religious institution, and churches are allowed to discriminate. They can refuse to host same-sex weddings, interfaith weddings, interracial weddings – whatever. And almost everyone agrees that they should be allowed to do so. Whatever else it means, the First Amendment definitely covers religious institutions’ rights to decide how to practice their religion.

That’s a doozy of a “solution.”

Neither Jack Phillips, nor florist Barronelle Stutzman, nor baker Melissa Klein, nor calligrapher Joanna Duka, nor photographer Elaine Huguenin, nor Bed & Breakfast owner Jim Walder “turned people away based on their identities.” All of these defendants in unjust lawsuits brought by petulant, intolerant homosexual oppressors served homosexuals and provided products to homosexuals—an inconvenient fact that Michaelson omitted. Phillips was willing to sell the homosexuals who are suing him a pre-made cake for their wedding or any other baked goods. Stutzman had sold flowers for years to the homosexual who has sued her, knowing full well his “sexual orientation.”

For the umpteenth time, what these Christians are unwilling to do is provide a service or product for a type of event that the God they serve abhors. For theologically orthodox Christians, marriage is first and foremost a picture of Christ and the church. The union of Christ the bridegroom and his bride, the church, is a union of two different and complementary entities. They are different in both nature and role. Pretending that the union of two people of the same sex can be a marriage is heresy. In theological terms, such a belief would necessarily mean that there is no difference in nature or role between Christ and his church.

And theologically orthodox Christians throughout the history of the church and today understand that God detests homosexual activity even as he loves those who reject Him and his Word. What a grievous injustice it is for the government to compel Christians to serve, participate in, or provide products for an event that celebrates a union that God detests.

Christians also recognize that true marriage—that is the union of one man and one woman—also serves public and secular purposes. It serves children who have an intrinsic right to know and be raised by both a mother and father–preferably their own biological parents.  Further, the needs of children are best served when they are raised by a mother and father. In serving the needs and rights of children, true marriage also serves society.

Michaelson offered this odd statement: “the First Amendment definitely covers religious institutions’ rights to decide how to practice their religion.”

Evidently Michaelson isn’t “woke” to the fact that the First Amendment definitely covers religious individual’s right to decide how to exercise their religion.

Michaelson denies that his solution of providing goods and services only for weddings held in certain churches constitutes religious discrimination:

[S]ince the bakery (or photographer, or florist) is limiting their services to certain physical venues, rather than discriminating against individual customers, the practice is what lawyers call “facially neutral.” If you’re getting married at venue A, B, or C, we can provide a cake for you. Period. You can be of whatever religion, sexual orientation, or gender identity that the venue allows; that’s up to the venues. All the bakery cares about is where the wedding is happening.

So, now for some questions that may help further illuminate just how asinine Michaelson’s proposed solution is:

1.)  What if a theologically orthodox Christian couple is having their wedding in a home, on the beach, on a mountain top, at an inn, in a hotel, or some other venue? Why should Jack Phillips be precluded from providing a wedding cake for such a wedding?

2.)  What if a denomination or church is in the midst of a schism, with some members upholding orthodoxy and some heresy? And what if a theologically orthodox couple in this church want a cake from the baker? Shouldn’t Phillips be free to provide a cake for this type of event that doesn’t violate his religious convictions?

3.)  What if Phillips wants to serve any sexually complementary couples because of his belief that marriage—which has an ontology—is good for all humans and good for society? Shouldn’t he have the right to serve all such couples regardless of their religion or absence of religion?

Marriage has a nature. It is something. Societies historically have recognized and regulated it, but they did not create it out of whole cloth. Marriage has a nature central to which is sexual differentiation and without which a union is not and cannot, in reality, be a marriage. A same-sex union is the antithesis of a marriage. It is an anti-marriage. I bet if a homosexual couple were to ask Phillips to make a birthday cake for the birthday of one of their mothers, he would do it. This illustrates that Phillips’ refusal to make an anti-wedding cake does not constitute discrimination against persons based on their “sexual orientation” but, rather, constitutes discriminating among types of events based on his religious beliefs. To paraphrase Michaelson, Phillips doesn’t care about the “sexual orientation” of his customers. All he cares about is the type of event that he’s being asked to serve.

I’ll speculate again. I bet if a man who identifies as homosexual were to choose to marry a woman—perhaps because he wants a traditional family life—Phillips would bake a wedding cake for the reception. Conversely, if two heterosexual women were to choose to marry—perhaps for some pragmatic fiscal reasons—Phillips would likely refuse to make a wedding cake. Both hypotheticals illustrate that Phillips’ refusal to bake a wedding cake for a same sex couple has nothing to do with their “sexual orientation.” It is the type of event to which he objects.