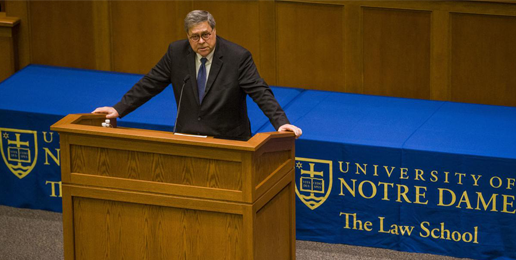 Fifteen years ago, the speech U.S. Attorney General William P. Barr recently delivered to students at the University of Notre Dame would have been widely approved. Today, however, the culture has changed so dramatically that widely accepted moral truths are now controversial.

Barr shared his thoughts on religious liberty with students at the Notre Dame Law School and the de Nicola Center for Ethics and Culture in early October. He outlined how the Founding Fathers enshrined in the Constitution their belief in the importance of religious liberty, “which provides for limited government, while leaving ‘the People’ broadly at liberty to pursue our lives both as individuals and through free associations.”

In the last century, Barr noted, our beliefs helped us to stand up to and defeat Fascism and Communism. But in this century, we face a different challenge. Barr said the Founding Fathers foresaw “our supreme test as a free society” as a challenge not from without, but from within. “The question,” Barr said, “was whether the citizens in such a free society could maintain the moral discipline and virtue necessary for the survival of free institutions.” We have yet to prove we can meet that test.

Barr reminded his audience that “in the Framers’ view, free government was only suitable and sustainable for a religious people–a people who recognized that there was a transcendent moral order antecedent to both the state and man-made law and who had the discipline to control themselves according to those enduring principles.”

This raises the question, what happens when a free republic is no longer governed by a religious people?

Barr discussed how religion promotes the moral discipline and virtue needed to support free government. He said the Founder’s Judeo-Christian moral system taught them, “Moral precepts start with the two great commandments–to Love God with your whole heart, soul, and mind; and to Love Thy Neighbor as Thyself.”

Barr shared that “Natural law–a real, transcendent moral order which flows from God’s eternal law–the divine wisdom by which the whole of creation is ordered.” Today he said, “Modern secularists dismiss this idea of morality as other-worldly superstition imposed by a kill-joy clergy.”

He noted that as the Judeo-Christian moral system has fallen into public disfavor and secularism and the doctrine of moral relativism has grown, our society has seen great upheaval.

He lamented what has happened to our society saying, “What we call ‘values’ today are really nothing more than mere sentimentality, still drawing on the vapor trails of Christianity.”

Barr decried, “The force, fervor, and comprehensiveness of the assault on religion we are experiencing today.” He also noted the irony that the secularism coming against Christianity is becoming a religion unto itself.

We are different from previous societies. Barr said that in the past, the moral chaos we are experiencing now would have caused society to recoil in horror, but today’s high-tech pop culture distracts us from these cultural horrors.

Barr pointed out the absurdity of today’s culture, relying not on morals to treat the underlying cause, but instead on the state. “So, the reaction to growing illegitimacy is not sexual responsibility, but abortion. The reaction to drug addiction is safe injection sites.” The state becomes the father and mother.

Barr criticized, “the way law is being used as a battering ram to break down traditional moral values and to establish moral relativism as a new orthodoxy.” He shared that this has allowed secularists to legalize abortion and euthanasia, and seek to eliminate laws reflecting traditional morality.

He also criticized the Obama administration for refusing to accommodate the free exercise of religion by forcing religious employers to violate their beliefs and provide coverage for abortions and abortifacients.

1.) Public school curricula–often with no opt-out–that are incompatible with traditional religious principles.

2.) Attacks on private religious school that seek to force schools to adhere to secular orthodoxy. He spoke about a lawsuit in Indiana where a teacher is suing a Catholic school because she was fired after revealing she is in a same-sex “marriage.”

Barr painted a grim picture. “We cannot have a moral renaissance unless we succeed in passing to the next generation our faith and values in full vigor,” he urged. “The times are hostile to this. Public agencies, including public schools, are becoming secularized and increasingly are actively promoting moral relativism.”

In the face of this hostility, Barr offered this advice to students: “We must be vigilant to resist efforts by the forces of secularization to drive religious viewpoints from the public square and to impinge upon the free exercise of our faith.”

Most importantly–and controversially to some–he concluded with this declaration: “I can assure you that, as long as I am Attorney General, the Department of Justice will be at the forefront of this effort, ready to fight for the most cherished of our liberties: the freedom to live according to our faith.”

IFI highly recommends watching his presentation in this YouTube video. His remarks about religious liberty begin at the 12:44 mark: