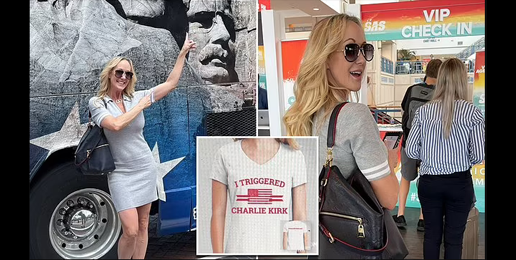 Suffering from a case of unrighteous indignation, the judgmental Love huffed and puffed that TPUSA felt “like a religious cult” because of the presence of conservative Christians. That makes three subjects about which she knows little:  religious cults, Christianity, and conservatism.

Love asked rhetorically, “How can conservatives expect to grow as a movement when they don’t seem to respect professions?” Seriously? What principle demands conservatives hold “sex work” in esteem?

Love continued in her criticism of TPUSA’s decision to disinvite her: “It’s stupid to persecute people who have a different lifestyle than you.” She sounds remarkably like run-of-the-mill leftists who see dissent from their moral and political views as persecution, bigotry, and hatred.

At least as troubling as Love being invited in the first place to the event at which teens as young as 15 were present are the responses from purported conservatives like Federalist co-founder Ben Domenech who tweeted, “The right has an opportunity to be the big tent party. Don’t be a bunch of prudes.”

Calling conservatives who oppose pornography, which degrades women and destroys families, “a bunch of prudes” exposes Domenech’s ignorance and unfitness for a leadership role in any conservative movement. Sexual continence and boundaries are essential for the welfare and prosperity of any society. Reining in the prodigious and profligate sexual impulses of humans—especially male humans—is a first order, necessary business of any healthy society—far more important than business regulations or tax rates.

Love strained to use conservative principles to defend her position:

TPUSA literally opened the show talking about how we need to fight back against big tech censorship, cancel culture, the deterioration of our 1st Amendment. … and then they expelled me. … It’s a worst case example of cancel culture.

Nope, big tech didn’t censor her. Her First Amendment rights were not denied. And being asked to leave the event was not an example of cancel culture, no matter how many times she and her creepy fans assert it was.

TPUSA is a private organization hosting an event to promote conservative ideas. Disinviting a public figure who not only opposes some of TPUSA’s beliefs—especially fundamental ideas about sexuality—but also actively works against them in ways that TPUSA views as destructive is not an act of cancellation.

Russell Kirk, author of the hugely influential book, The Conservative Mind, wrote that conservatism has some essential constituent features that should shape laws and policies, including a

Belief that a divine intent rules society as well as conscience, forging an eternal chain of right and duty which links great and obscure, living and dead. Political problems, at bottom, are religious and moral problems. … Politics is the art of apprehending and applying the Justice which is above nature. … Man must put a control upon his will and his appetite, for conservatives know man to be governed more by emotion than by reason.  Tradition and sound prejudice provide checks upon man’s anarchic impulse.

Rather than expending so much energy trying to transform or deform the GOP’s position on sexual matters—matters that are essential to a well-ordered society conducive to human flourishing—maybe Love should join the Democrat Party and try to change its position on borders, China, and tax rates.