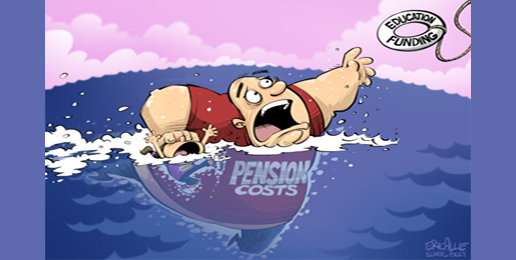 Republicans in the Illinois Senate Want to Increase the Size of Illinois Government and Your Taxes
Written By John Biver   |   05.01.17
PRINT

Have you heard about the “Grand Bargain” that has been travelling the bumpy road of the legislative process in Springfield during this General Assembly session? Not surprisingly, it is neither a bargain nor grand for taxpayers.

Illinois Senate Minority leader Christine Radogno (R-Lemont) has been (or was?) working with Illinois Senate President John Cullerton (D-Chicago) for a few months on trying to craft a budget that can pass.

Illinois has been without a budget for almost two years. What’s wrong with that? Many things, including what Illinois Senator Dan McConchie (R-Lake Zurich) has pointed out, “Every day we go without a balanced budget, the state debt rises by $11 million.”

That deserves a repeat: Illinois’ debt rises by $11 million every day we don’t have a balanced budget.

Another not-so-little problem are reports estimate that without action, the state could have as much as $15 billion in unpaid bills by July.

Doesn’t it make you proud to live in the Land of Lincoln? On that topic:

Illinois registered voters are divided over whether they’d like to leave the state or stay, according to the latest poll from the Paul Simon Public Policy Institute at Southern Illinois University Carbondale.

Specifically, the poll found that 47 percent say they would like to move and 51 percent prefer to remain in the state. Just under 2 percent said they didn’t know.

It’s no surprise that taxes “are the single biggest reason” people want to leave.

The Illinois Policy Institute’s John Tillman recently noted that IPI “commissioned a poll that found that more than half of Illinois voters want lawmakers to balance the budget by only cutting state spending.”

With the help of our friends at the Illinois Policy Institute, let’s do a quick survey of some more of the unpleasant facts regarding Illinois’ fiscal state of the state.

Illinois Has Highest Overall Tax Burden in the Nation
A new report from WalletHub finds Illinois’ combined state and local tax burden is higher than that of every other state and the District of Columbia.

Some state politicians want to make this tax burden even worse. The Illinois Senate is currently negotiating its so-called “grand bargain” budget deal, which includes billions of dollars in tax hikes for Illinoisans. Among the Senate’s ideas: a permanent 33 percent income tax hike, implementing a tax on sugary beverages, raising taxes on food and drugs, and expanding the sales tax to include previously exempt services.

The Truth About Your Property Tax Bill

Illinoisans are struggling to pay the highest property taxes in the nation, and that’s largely due to unfair overspending in local governments.

How about those bloated and overly generous government employee pensions?

Interest on Illinois’ pension debt is $9.1B per year
A golden rule of finance is this: Debt that can’t be paid won’t be paid.

The Senate’s “grand bargain” contains a one-year spending “cap” that won’t improve fiscal responsibility. A real cap must come with structural spending reforms to return spending to a level that taxpayers can afford.

Lest you think it’s only income and property taxes being discussed:

Take ACTION:  Please send a message to your state senator to urge him/her to reject any and all proposals to increase taxes in Illinois. Springfield lawmakers need to understand that state government has a serious spending problem, not a revenue problem. Moreover, they have proven to be utterly irresponsible with the billions of dollars in revenue they already receive; why should they be entrusted with even more?