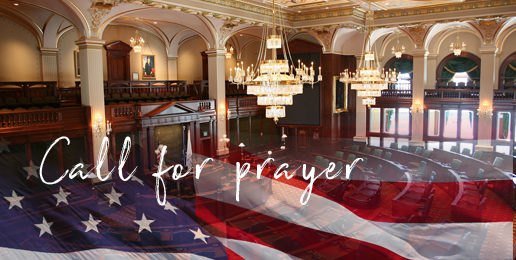 The 2020 session of the Illinois General Assembly is now underway in Springfield. Our state lawmakers are introducing new proposals, adding to the 6,000+ bills that were introduced in the first half of the session (2019). IFI’s top concern is stopping the effort to repeal the Parental Notice of Abortion Act. In a recent email, the anti-life Personal PAC told their supporters that their

key goals in 2020 will be repealing dangerous anti-choice legislation and safeguarding reproductive rights for future generations. With that in mind, in the next few months, Personal PAC will be focused on:

Opposing this horrific agenda must be a prayer priority for all pro-life Christians in the state. It must also become a tier one call-to-action for us all. Our local state representatives, state senators and Governor J.B. Pritzker must hear from us loud and clear. They must come to understand that we will not remain silent as they work to usurp our God-given parental rights so they can pursue an agenda of death.

In addition to that, ethics reform is once again making headlines in the wake of multiple FBI corruption investigations and numerous indictments. Chicago’s ABC7 I-Team recently aired a report identifying Illinois “as the most corrupt state in America.” Political pundits speculate that there will be more indictments coming in the weeks and months ahead. As if that weren’t enough, Illinois House Speaker Michael Madigan is at the center of a rape cover-up scandal that may have far reaching consequences.

To say we have much to pray about is an understatement. Our state government is immersed in chaos and corruption. This is a reflection of the character of the men and women serving in Springfield over the past several decades. We are to pray for  all those in authority, that we may live peaceful and quiet lives in all godliness and holiness, (1 Timothy 2:1-2).

Last week, my wife and I were blessed with the birth of our son, Owen. He was born with Down Syndrome and has significant medical challenges. We learned that Owen had an imperforate anus and an AV canal defect in his heart. Owen had surgery on his second day of life and spent the next six days in the PICU. He is facing three additional surgeries in the next several months.

Owen has also been diagnosed with transient abnormal myelopoiesis (TAM). We were told that twenty percent of Downs Syndrome kids develop Leukemia but 80 percent outgrow it. Further blood tests will indicate more.

We would greatly appreciate if you would keep baby Owen in your prayers over the next several months. We praise God for the technology and science and the amazing medical team that has worked to save Owen’s life and help him overcome these health hurdles.

God is stretching the Smith family in new and exciting ways. We are walking in faith, trusting in God’s plan for Owen while trying not to rely not on our own (finite) understanding. I can honestly say that we cannot wait to see how God is going to use this boy in our family and beyond.