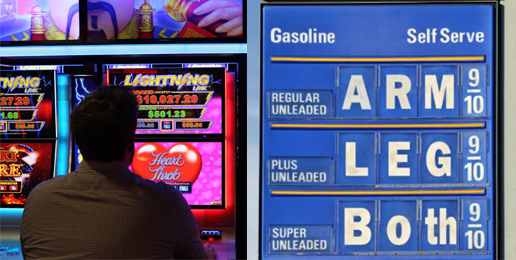 The regular session of the Illinois General Assembly ended at midnight on May 31st. When that deadline passed, Illinois House Speaker Michael Madigan (D-Chicago) called for a Special Session of the Illinois House in order to finish what they started–namely the expansion of immorality, exploitation of citizens with new fees and taxes, and irresponsible spending of state government. They finished “business” on Sunday.

As I reported late last week, in addition to the horrific anti-family legislation being approved in the closing days of the 2019 session, our state lawmakers in true bipartisan fashion, gave their approval to a huge gambling expansion that not only legalizes sports betting but increases the number of casinos in the state by six, including one in Chicago. This will mean that Illinois will have 16 casinos in total.

With this legislation, they also expanded the number of slot machines and table games at casinos, places slot machines at Chicago’s two airports, and allows for additional slot machines in truck stops throughout the state. Slot machines are often referred to as the “crack cocaine of gambling,” because they are highly addictive.

We are disappointed to report that on Saturday, the Illinois House approved this legislation (SB 690) by a vote of 87-27. On Sunday, the Illinois Senate concurred with a vote of 46-10 with two voting present. Governor JB Pritzker is expected to sign it into law this summer. Our political “leaders” who voted for this evidently believe they can exploit “gaming” to drain more revenue from the residents they were elected to serve.

To expand gambling, our state lawmakers had to completely ignore the 1999 U.S. Gambling Commission which recommended a moratorium on the expansion of any type of gambling anywhere in the United States, as well as the re-criminalization of slot machines/electronic gambling machines (EGMs) convenient to the public. The Gambling Commission’s conclusions have been reconfirmed in the multi-volume 2009-12 U.S. International Gambling Report, produced in large part by the University of Illinois and in concert with colleagues at other academic institutions.

Evidently, our political leaders want Illinois to become the Nevada of the Midwest.

The revenue generated by expanding gambling in Illinois is insufficient for the spendthrift politicians in Springfield. Since the snare of gambling will not satisfy their insatiable appetite for public money, they turned to other ways to squeeze the hardworking families of Illinois by doubling our state’s motor fuel tax from 19 cents to 38 cents per-gallon, and by raising vehicle registration fees from $101 to $151 for most vehicles.

We are shocked to report that on Saturday that this legislation (SB 1939) was passed in the Illinois House with the help of 20 Republicans by a vote of 83-29 with one voting present. On Sunday, the Illinois Senate concurred with a vote of 48-9 with one voting present. Eleven of the 19 Republicans in the Illinois Senate voted for these tax increases. Come July 1st, we can thank them for the dubious distinction of Illinois having the second highest gas tax rate in the nation.

But it gets worse. According to an article by the Illinois Policy Institute,

The state motor fuel tax will also be tied to inflation, meaning it will automatically rise in future years without lawmaker approval. The hike will cost the typical driver around $100 more in its first year.

This means that Illinois drivers will have a perpetual tax increase facing us potentially every year.

Lawmakers in Springfield refuse to live within the means of our current cash flow and refuse to cut the size of government. Instead they irresponsibly turn to tax increases and expansion of gambling again and again. Just how much is enough? Well, the AP reports that the bipartisan state budget agreement borrows more than $1 billion in order to pay down a a mere 14 percent of our “lingering, $7 billion pile of past-due bills” in order “to save money on interest payments.”

“Irresponsible” doesn’t begin to describe it.

Increasing taxes, like expanding gambling, is counter-productive. It will adversely affect Illinois’ economy, hurt businesses and cause them to relocate out of state, and will ultimately increase the already high tax burden on families that remain in Illinois. These proposals are decidedly anti-family.

Oh, by the way, state lawmakers gave themselves a pay raise of $1600 a year for all their work spending our hard-earned money.

What Are Gov. Pritzker’s Priorities?