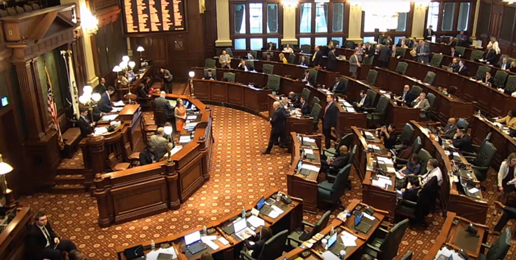 If you follow politics and public policy at all, you know well the saying, “elections have consequences.” Well, during this most recent General Assembly session (January-May), and especially the last two weeks, we have seen those consequences in spades, as super majorities in both the Illinois Senate and Illinois House passed far-reaching agenda items that can only be described extreme, duplicitous, and destructive.

The most wicked of these legislative proposals this session was the Reproductive Health Act (SB 25), the “Kill-Babies-Bill” proposal as Laurie Higgins termed it in a recent article. This bill, which, among other pernicious things, creates a fundamental “right” to abortion, redefines fetal viability, and expands the definition of “health of the patient.” It passed the Illinois House by a vote of 64-50 and the Illinois Senate by a vote of 34-20. Governor JB Pritzker is expected to sign it into law this summer.

The exploitation of children doesn’t stop with the push to eliminate them in utero. Those who survive regressives’ blood-lust agenda must now navigate the LGBTQIA+ minefield thanks to the LGBT History Mandate (HB 246). This proposal will mandate that all students in K-12 public schools be taught about the “roles and contributions” of homosexuals and opposite-sex impersonators and that textbooks purchased include discussions of the roles and contributions of homosexuals and opposite-sex impersonators. This legislation was passed in the Illinois Senate by a vote of 37-17 and in the Illinois House by a vote of 60-42. Governor JB Pritzker is expected to sign it into law this summer.

Then we have the push to legalize “recreational” marijuana (HB 1438), a policy against which left-leaning publications opined, include the Chicago Tribune, New York Times and New Yorker. For two years now, IFI has worked tenaciously to educate Illinois residents in every part of the state, with special forums, articles, videos, web conferences, radio interviews and through a variety of other social media postings. With the help of a few Republican lawmakers in each chamber, this legislation was passed in the Illinois Senate by a vote of 38-17 and in the Illinois House by a vote of 66-47. Governor JB Pritzker is expected to sign it into law this summer.

I would be remiss not to mention the anti-IFI resolution (HJR 55) that is still pending in Springfield. The sponsors have not withdrawn this indefensible motion that Springfield regressives would exploit to use the power of the government to quash our work, speech, and presence in Springfield. Their call to curtail our right to lobby at the Capitol and for the Illinois State Police to investigate us for “hate speech” is still hanging over our head and could be called for a vote anytime through January 2020 when the 101st General Assembly ends.

To say that this session has been frustrating is an understatement. The floor debates have been both laughable and discouraging. For example, State Representative Maurice West (D-Rockford) spoke on the House floor during debate on SB 25, self-identifying as a Christian minister to justify and advocate for baby slaughter.

There is a dearth of wisdom, common sense, courage, integrity, and compassion in the Illinois General Assembly. Hosea 4:6 laments, “My people are destroyed for lack of knowledge,” and 2 Timothy 4:3 warns that “the time will come when they will not endure sound doctrine; but wanting to have their ears tickled, they will accumulate for themselves teachers in accordance to their own desires.” This toxic combination was on full display this month. There aren’t many serving in Springfield who are resolutely pro-family conservative in their political ideology and even fewer who hold to a biblical worldview.

After a season of a lot of hard work and prayer, it is easy to be discouraged by the outrageous politics of Illinois. We are well down the slippery slope. Where it will bottom out, no one knows. It appears that God has turned Illinois over to debased (depraved) thinking as Romans 1:28-32 predicts. In short, our state’s political leaders have not just forgotten God but are also arrogantly shaking their collective fists at Him. At the same time, far too many church leaders sit on the sidelines doing their very best to stay lukewarm. As a result, Illinois is under judgment.

At this point it is wise for us to take a deep breath, take a step back, and gain some perspective.

In the end, we must be mindful that many of our neighbors are oblivious to what Scripture teaches. They are captives of false ideologies (Luke 4:18; 2 Corinthians 10:5) and distracted by vain worldly pursuits (James 4:4). More importantly, we are called to keep our eyes on the prize (Philippians 3:14), not the storm around us. And we are instructed not to grow weary of doing good (Galatians 6:9) — even in the People’s Republic of Illinois.

We have a lot of work ahead of us. Establishing and reinforcing a biblical worldview in our families and in our churches is vital if we hope to help our own family members, let alone our neighbors, to navigate the culture in Illinois. The snares have been set out for us, our children, our grandchildren, and our neighbors. And with every legislative session, those snares are multiplying.

We remain resolved to work hard to educate and influence the hearts and minds of anyone who has ears to hear and eyes to see, for the sake of the King and His Kingdom. May His will be done, on earth, as it is in heaven.