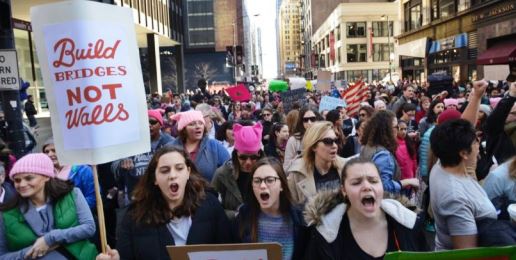 If there were laws requiring truth in political advertising, today’s evasively-named “Illinois Women March on Springfield” would be called “Illinois Feminists’ Jackbooted March for Womb-Killing and Sexual Perversity.”

“Progressive” feminists will be stomping into Springfield later today lobbying lawmakers to, among other odious things, force taxpayers to fund abortion through Medicaid; eliminate in law any recognition of sex differences between men and women through support for the misnamed Equal Rights Amendment; make it easier for gender-dysphoric men and women to access fraudulent birth certificates; and through opposition to the Pupil Physical Privacy Act, force all Illinois public schools to allow co-ed restrooms and locker rooms.

“Progressives” appeal to compassion, equality, and justice to mask evil and injustice. They pervert concepts that appeal to Americans in order to advance policies, laws, and values that thwart human flourishing and the public good while advancing radical autonomy and selfishness. Don’t be deceived by feminist sophistry or cowed by their epithets.

Conservative women have far wiser words to offer on these issues:

“Is this a proper and moral solution to an unexpected pregnancy for poor women? Can’t Illinois find a way to raise the opportunities for its citizens so they can afford to house, feed and educate their children and welcome new life, rather than tell them: kill your children, we don’t want them.” ~Ann Scheidler– Vice President, Pro-Life Action League

“Imagine my surprise to find out that a Women’s March to Springfield is really a March to promote a pernicious agenda that will have far reaching and unintended effects; spiritual, physical and mental on women. The March’s agenda, being promoted, seems to center around a woman’s unfettered license to do whatever, whenever, she wants, regardless of any consequences or victims.” ~Bonnie Quirke– President, Lake County Right to Life

“The true strength of women is revealed in the uniqueness in her female gender. Only a woman can bring a life into the world. These women would be better served to recognize and celebrate their true beauty and dignity – their ability to procreate and the natural instincts women have to nurture children.” ~Dawn Fitzpatrick– President, Chicago March for Life

You too can make your voice heard. Take ACTION on these three items:

1.)  Click HERE to urge your state representative to OPPOSE taxpayer funding of abortion through HB 40.

2.)  Click HERE to urge your state representative to OPPOSE HB 1785 and uphold birth certificates as legal documents.  The state of Illinois has no duty or right to make it easier for men and women who wish they were the opposite sex to falsify their birth certificates.

Please also make a couple of calls to reinforce your emails. The Capitol switchboard number is (217) 782-2000.

Join us at one of our four stops as we have Dr. Calvin Beisner, the founder & national spokesman for The Cornwall Alliance for the Stewardship of Creation lead a discussion about the Christian responsibility to the environment and learn how to discern truth and myth in the climate change controversy.