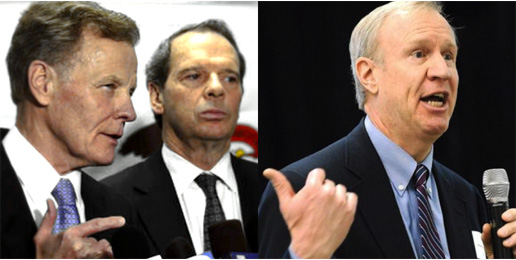 Anyone paying the least bit of attention to Illinois government knows the state is a fiscal mess, and the ongoing drama being played out between our Republican governor and Democrat General Assembly is like a long-running TV soap opera.

The news of the day is that Rich Miller’s Capitol Fax is reporting that the passing of a tax increase during the current lame duck session is now not going to happen. For those unfamiliar with Capitol Fax, it is in some ways to Illinois politics what the Drudge Report is nationally. While Drudge is a conservative, both sides can benefit by visiting his website. While Rich Miller is a liberal, it’s one of the best sources for good information on what’s going on in dreary Springfield.

Now that the possibility of a tax hike passing with the help of “16 lame duck” legislators is not going to happen, Republicans cheer and Democrats lament, right? Not necessarily.

According to our state’s constitution, the governor has a lot of power when it comes to preparing the state’s budget, and, in fact, is constitutionally bound to present a balanced budget every year. Long-time Illinois House Speaker Mike Madigan has no such constitutional requirement.

Several Republican Illinois legislators have long assumed that Bruce Rauner would willingly sign a tax increase as part of a budget deal with Madigan. Those aren’t the headlines Rauner wants going into 2018’s gubernatorial election, however, so a super-majority Democrat controlled General Assembly doing the dirty work without the need of his assistance would have been ideal. And, of course, Democrats raising taxes again supplies a terrific weapon for all Republican campaigns.

Except that now, as Rich Miller reports, the Democrats won’t be doing Rauner that favor. So it’s back to the status quo, which really isn’t the status quo in that the numbers don’t stay the same, they continue to get worse.

Neither party has offered an honestly balanced budget in many years, and Governor Rauner, as chief executive, might possibly be blamed for the little things — here are just a few facts from the Illinois Policy Institute article “Illinois’ $204B Debt Crowding Out Payment for Social Services” (we have put them into bullet points for easy reading):

So is raising taxes a solution? Fiscal conservatives understand the answer is “no” — the Illinois Policy Institute’s Ted Dabrowski recently laid out the ABC’s:

For many, tax hikes look like the only solution to Illinois’ fiscal woes. But tax hikes will only make things worse. Illinoisans are already burdened with some of the highest taxes in the nation, including the highest property taxes of any state.

As a result of Illinois’ dysfunction, the state is bleeding people and its tax base. Between July 2014 and July 2015, approximately 300,000 people left Illinois for good and only 200,000 moved in, according to the U.S. Census Bureau. This resulted in a loss of 105,000 residents on net to other states – an all-time high for Illinois. Tax hikes will only chase more residents away.

So what is the solution? Fiscal conservatives understand that, too — again here’s Ted Dabrowski:

The only way to keep Illinoisans here is to bring fiscal sanity back to the state through major spending reforms that bring Illinois’ budget in line with what ordinary Illinoisans can afford.

Fiscal sanity? Spending reforms? Uh, yes, and maybe that’s a nicer way of saying it than the plain truth — which is that Illinois needs to cut its spending by many billions of dollars if it is to ever make the budget math work.

Since Democrats have no wish to cut spending, and Republicans completely lack the ability to draw up a genuinely balanced budget and then sell it successfully to the people of Illinois, it’s a good bet we’ll just see more of the same. The budget can will be kicked down the road into the 2018 election year when tens of millions of dollars will be spent by each party trying to portray the other side as the villain.

The Illinois GOP has just launched yet another crusade to make Democrat House Speaker Mike Madigan as the chief villain. Here’s a better idea. Since Madigan knows how to win, Republicans should work on converting him into a Republican fiscal conservative. With Madigan’s political and communications skills, Illinois can then get back on the right track. Who knows, with Madigan’s abilities and Illinois’ potential, our state might soon be competing with states like Texas for businesses and experience the growth levels it once enjoyed.

Take ACTION: Click HERE to send an email to your state representative and to Governor Rauner to urge them to do the hard work of cutting the waste and bloat in Illinois government instead of constantly looking for new ways to tax the people. The size of government is the problem!

Here are just a few recent headlines for your reading pleasure: