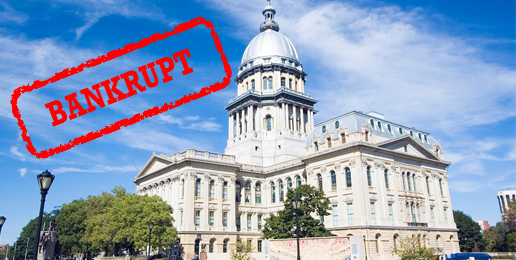 You know what’s already politically possible and, in fact, quite easy? Bowing to the powers of the government unions, keeping the public in the dark about just how bad things are, and allowing the state to go forward into bankruptcy. Don’t doubt me on this: bankruptcy is in our future. That has been my view for many years, but I do have to thank Mark Glennon of Wirepoints for bringing this to my attention at a recent press conference:

William Isaac knows insolvency when he sees it, and how to deal with it. As Chairman of the Federal Deposit Insurance Corporation from 1981 to 1985, he was on the forefront of the banking crisis at the time. He founded The Secura Group, a leading consulting firm in financial regulation, and is a respected voice in the world of finance.

Bankruptcy, not just for Chicago, but for Illinois as well, he says.

“The city and the state should act now to restructure their liabilities and put the fiscal mess behind them. This can be accomplished by utilizing Chapter 9 and other tools Congress just gave Puerto Rico,” wrote Isaac in an opinion piece published Thursday in The Bond Buyer.

In the short run tax increases can partly bridge the deficits, but even this benefit will prove pyrrhic. Recent tax increases have already made the state and the city less competitive venues. As for expenditures, there’s still fat that can be cut from the budget, but it’s difficult to see this making more than a dent.

Why is his opinion a watershed? He’s the first major financial figure to outright call for bankruptcy. Others have said to start thinking about it or that it might be needed eventually — for Chicago. Pass the needed federal legislation now, says Isaac. Federal legislation would be needed to allow a whole state to file for bankruptcy. “Once a financial mess of the first order is at hand, as is the case with Chicago and Illinois, it can be far better to act decisively by restructuring rather than prolonging the pain.”

The above is from an article from almost two years ago. (Wirepoints is excellent. Readers should sign up for their email newsletter.)

Here is the simple and easy-to-remember order of upcoming events that could save our state:

1.)  Bruce Rauner loses and J.B. Pritzker wins and finds out there is no money to fund all his promises. (Of course, J.B. already knows that, right? He can’t be that uninformed, right?)

2.)  Republicans privately fund what Jeanne Ives couldn’t get publicly funded last year—a serious study of how we can tax ourselves in a sane manner here in Illinois. This study need not be expensive or take long to accomplish. Let’s look at all those states that manage to have schools and police officers without taxing people out of their homes.

3.)  “Big and bold” becomes how Republican legislators and candidates think and act and the GOP starts winning more elections.

4.)  Illinois fiscal reality is reckoned with, and the causes of the current mess aren’t kicked down the road any longer.

Tax reform. School choice. Taxpayers freed from funding exorbitant pensions that now eat up 20-25 percent of the state budget. (Private sector companies have been getting out of the pension business for decades. It’s time for government to follow their lead.) Bankruptcy. Illinois stops being a national laughing stock and instead gets a fresh start. And families and jobs move here instead of away.

Laugh if you want, but William Isaac nailed it: “Once a financial mess of the first order is at hand, as is the case with Chicago and Illinois, it can be far better to act decisively by restructuring rather than prolonging the pain.”