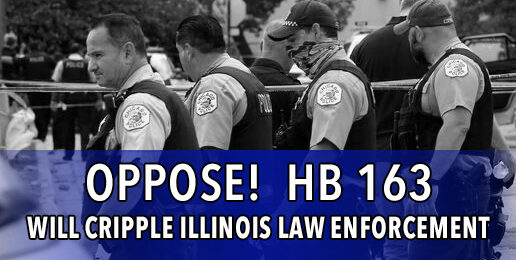 A coalition representing Illinois law enforcement leadership and rank-and-file officers has issued a statement in opposition to House Bill 163 as amended that was unveiled earlier this month, saying:

The so-called “reforms” that are part of House Bill 163 as amended would destroy law enforcement’s ability to keep communities safe. The authors of this legislation are not law enforcement professionals with hundreds of years of combined experience and this bill was drafted without law enforcement input, and because of that the long-term unintended consequences of this legislation would be dire. The Illinois Law Enforcement Coalition recently enumerated its Safe Communities plan, a sensible approach to modernizing Illinois law enforcement, but House Bill 163 as amended would lead to unsafe communities in Illinois. We urge the Illinois General Assembly to avoid making a sudden, rash decision in the Lame Duck Session and instead work carefully with all stakeholders to truly examine what needs to be done regarding law enforcement in Illinois.

The Illinois Fraternal Order of Police (FOP) State Lodge, FOP Labor Council, FOP Chicago Lodge 7, Illinois Sheriffs’ Association and the Illinois Association of Chiefs of Police have formed the Illinois Law Enforcement Coalition and have been working on these strategies since summer to improve community safety and enhance the trust between community members and law enforcement.

In addition to that, Illinois State Representative Darren Bailey (R-Louisville) published a video this morning detailing how this 611-page bill would “cripple law enforcement in Illinois.”

The bill could be called anytime between tomorrow, January 8th and Thursday, January 14th while they are in the lame duck veto session.

According to State Representative Bailey and the Illinois Sheriffs and Police Chiefs Associations, Amendment 2 of HB 163:

Take ACTION: Click HERE to send a message to your State Senator and State Representative to ask them to reject this foolish legislation which would negatively affect our families, our communities and especially the heroes that work tirelessly in law enforcement.