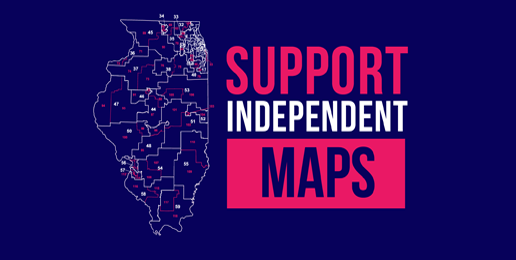 Fair Maps Could Be a Solution for Illinois
Written By Christine Misner   |   09.17.19
PRINT

On the website FairMapsIllinois.com, Breen explains, “If you despair over the future of Illinois… if you’re frustrated about the stranglehold of a corrupt political machine over Illinois politics… if you worry about whether your friends and family—and even you yourself—will be able to make a home in Illinois in the years to come… then this message is just for you.”

Fair Maps is a grassroots plan to let voters put a referendum on the 2020 ballot to amend the state constitution. If passed, the referendum would give the power to redraw the redistricting maps to an independent, bipartisan commission. To get Fair Maps on the ballot, Breen needs the signatures of 360,000 registered Illinois voters.

Breen does have public opinion on his side. According to a poll conducted in the spring by the Paul Simon Public Policy Institute at Southern Illinois University, 67 percent of Illinoisans supported a constitutional amendment such as Breen’s that would allow an independent commission to draw legislative maps, instead of the state’s lawmakers.

The state constitution mandates redistricting be done every 10 years. New maps will be drawn up in 2021, after the 2020 election. Unless Fair Maps is placed on the ballot and passed by voters, Breen suggests the maps will be redrawn once again to favor Democrats who will be beholden to House Speaker Mike Madigan.

Breen calls the current system, “The linchpin that takes otherwise fleeting control over the political process and turns it into a decades-long, sustained political machine: the power to draw legislative maps to guarantee a permanent partisan majority. No matter how the political winds blow, whether for him or against him, Madigan’s majority cannot be overcome.”

Other states that have tried to reform redistricting have faced court battles that have gone all the way to the U.S. Supreme Court. In June 2019 cases involving the States of Maryland and North Carolina were declined by the Court. Chief Justice John Roberts admitted the problems states have with gerrymandering and partisanship writing, “But the fact that such gerrymandering is ‘incompatible with democratic principles’ does not mean that the solution lies with the federal judiciary. We conclude that partisan gerrymandering claims present political questions beyond the reach of the federal courts.”

Iowas voters passed Fair Maps in 1980 and Breen calls the state, “A national model of clean, responsive government. Iowa’s debt and tax burden are under control. Iowa’s schools are good and its crime rate low. The people of Iowa are happy with their representation, and it’s easy to see why: when you have fair maps, legislators have to be much more careful to respond to the needs of the people they serve.”

Take ACTION: Click HERE to volunteer to collect a minimum of 10 signatures on an official petition page. You can also volunteer to sign up friends or promote this effort on social media.

This is an important way to return the political process to the voters of Illinois. Please prayerfully consider this worthy project, and spend a couple hours working to break free of the political headlock we’ve been in for decades.