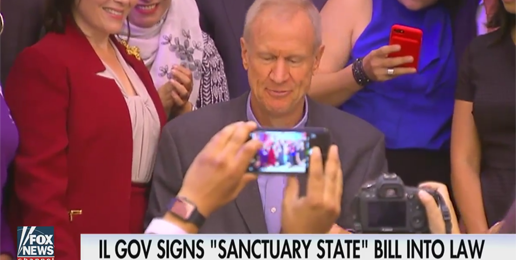 The Illinois Family Institute always appreciates when its work is read by more people, and we benefit when others bring attention to our work. Over the years when writing op eds I’ve made mistakes — failed to correct typos or spelling, used the wrong word such as Medicaid when the word should have been Medicare, and cited something as fact that turned out not to be true. Corrections from readers are always welcome…

A couple of weeks ago I wrote about SB 31, legislation that had been amended and shortened, and I failed to catch the updated language.

When Matt Dietrich of Politifact and the Better Government Association sent me an email bringing that error to my attention, I expressed my appreciation to him and made the correction in the article. Days later, Dietrich posted this article about my error, and while he noted my correction, he concludes that what I had written was “FALSE.”

Yes, the words I used from the earlier version of the bill was an error. My calling SB 31 a sanctuary bill was not an error.

Here is some text from an earlier version of SB 31, the “Trust Act”:

Provides that absent a judicial warrant or probable cause of criminal activity, a government official shall not make arrests in the following State-funded facilities or their adjacent grounds: State-funded schools, including licensed day care centers, pre-schools, and other early learning programs; elementary and secondary schools, and institutions of higher education…

This is language from the amended SB 31, which is now state law:

The change is merely cosmetic. The original version said a judicial warrant or probable cause of criminal activity would be required for a government official to make an arrest in several enumerated state-funded facilities. In other words, a law enforcement official could not make an arrest based solely on immigration status.

The newer version says that a law enforcement official cannot make an arrest based solely on immigration status, presumably anywhere. Thus, the newer version includes and applies to the state-funded facilities enumerated in the original bill.

Removing the language only made the bill more palatable to establishment politicians and their Leftist allies.

It is not difficult to understand the long-running dream of Leftists to import more future Democratic Party voters from other countries. Some of their most loyal supporters will be those who broke federal law to come here and were then protected by the Democratic Party.

Leftists are talented when it comes to the strategic manipulation of language. Just as centuries-old mainline Christian doctrine is now referred to as “hate,” illegal aliens are referred to as “undocumented immigrants.” Tolerance now means intolerance. The “Affordable Care Act” made health insurance unaffordable for millions of Americans. The “Trust Act” means you can trust that we don’t care if you’re here illegally.

As “blue” as Illinois is, Democratic Party leaders and their supporters know that even here you must be careful with language. And if you alter SB 31 enough, you can even deny it’s a sanctuary bill. Some people are upset that the ruse didn’t work.

The news of Rauner’s signing of SB 31 was covered by both the political left and the right, and the headlines are similar:

It is common for legislation to evolve. Changes are made not only for material reasons but also for cosmetic reasons. In the evolution of SB 31, the larger aim of the legislation remained constant: hinder state and local law enforcement from participation in enforcing immigration laws, which is the widely accepted definition of a sanctuary city or sanctuary state.

Here was the close of Dietrich’s article:

The Illinois Family Institute said public facilities including schools, colleges and day care centers “will be made into sanctuaries by Bruce Rauner signing SB 31.”

The original version of the bill prohibited police from making arrests in such facilities, but that language was struck from the version passed by the General Assembly. The new bill contains directives that the Illinois Association of Chiefs of Police says merely puts into state statute what most departments already practice.

We rate this statement False.

Actually, it is true. The only thing that changed was how the law was worded. My using text from the earlier version of the bill was an unfortunate mistake. That mistake was corrected. Perhaps more people will now understand what constitutes a sanctuary state.

From the National Conference of State Legislatures:

What Is a Sanctuary Policy? While there is no legal definition for sanctuary policies, the term is applied to jurisdictions that limit cooperation with federal immigration authorities, such as information about immigration status and limiting the length of immigration detainers. Click here to read more.

The Federation for American Immigration Reform:

The Role of State and Local Enforcement in Immigration Matters and Reasons to Resist Sanctuary Policies — Read the issue brief.