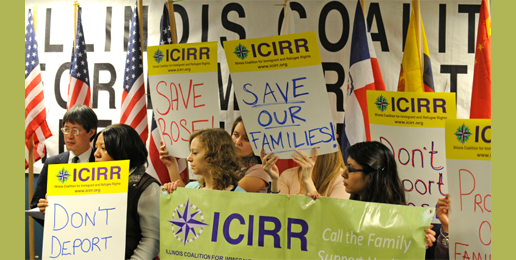 Most everyone has heard about “sanctuary cities” during the past few years due to the attention they received during the presidential election. But have you heard of sanctuary states? How about sanctuary government buildings? Governor Bruce Rauner has agreed to sign SB 31 into law — a bill that will make taxpayer funded facilities sanctuaries for people who are here illegally.

Here is one summary of what “sanctuary” means:

While the United States Justice Department begins to pursue withholding federal funds from cities like Chicago for their refusal to cooperate with federal immigration law enforcement officials, our governor and General Assembly are about to enlarge the controversy, expected to cost the state billions of dollars.

If the Trump Administration wins this fight (ultimately in the courts), it’s easy to figure the cost to Illinois taxpayers will be many times that Chicago estimate.

This is from the Illinois General Assembly’s website page for SB 31 — I have separated them into bullet points for easier reading:

[CORRECTION — A reader kindly brought to my attention that the language below did NOT make it into the final version of the bill that was passed — see Amendment 3 here. In truth, the language was not necessary since state and local law enforcement officers are prohibited from making any arrests anywhere in Illinois according to the guidelines of the statute. Focusing on the “state-funded facilities” only made clearer the offensive nature of the law.]

Provides that absent a judicial warrant or probable cause of criminal activity, a government official shall not make arrests in the following State-funded facilities or their adjacent grounds:

The opinion divide on crime rates in sanctuary cities separates just as you would expect. “Sanctuary” proponents claim crime rates are not higher where illegal alien populations are greater, sanctuary opponents say crime rates are higher. Both sides cite studies to back up their contention.

What are the facts? In an April article at The Hill, Ron Martinelli, former minority community violent crimes detective, wrote:

Most states and our federal government have kept information and statistics about illegal immigration, crimes committed by illegals and the costs borne by you the U.S. payer out of public view. It is in fact difficult, but not impossible to locate accurate crime statistics involving illegal immigrants. The statistics are buried both to suit a political agenda and to avoid public outcry.

His article, “The truth about crime, illegal immigrants and sanctuary cities,” is worth your time. It is packed with important information to consider.

Another article to read is from Scott Erickson, posted at the Heritage Foundation’s Daily Signal website back in February: “The Truth About Sanctuary Cities and Crime Rates.” After a survey of the statistics, he writes:

No community of decent people—citizens, illegal immigrants, or otherwise—wants to live in a society beset by violence and social dysfunction. Stripping local law enforcement of the ability to merely cooperate with their federal counterparts on issues as plain as the removal of a dangerous criminal jeopardizes the safety of all law-abiding individuals.

If state and local law enforcement will be prohibited from making any arrests anywhere in Illinois according to the statute, let’s take another look at the kind of facilities that will be made into sanctuaries by Bruce Rauner signing SB 31:

Is Illinois about to endanger children by preventing law enforcement from cooperating with federal immigration officials?

With Chicago’s murder rate and Illinois’ fiscal condition, is this really the time to have our state “harbor federal fugitives who have broken federal immigration law by crossing the border illegally”?

“Harboring federal fugitives” sure sounds different than the act of providing a “sanctuary,” doesn’t it?

Earlier this month, Illinois Review reported that according to the communications director for the Federation for American Immigration Reform, “Signing SB 31 into law would make Illinois the state most open to illegal aliens besides California”:

“Not only would it make Illinois open to those in the country illegally, it could create dangerous situations for the public and add more financial burdens to the state,” Dave Ray said. “And isn’t the state of Illinois already having financial difficulties?”

To learn more about the current and historic legal tussle between the feds and the states, read this article by Douglas V. Gibbs: Sanctuary Cities Violate Supremacy Clause.

Take ACTION: Click HERE to send a message to Gov. Bruce Rauner to ask him to veto this legislation. We only have a short window of opportunity to speak out.

For even more on the politics, crime rates, and economics of sanctuary cities and states, a collection of articles can be found here.