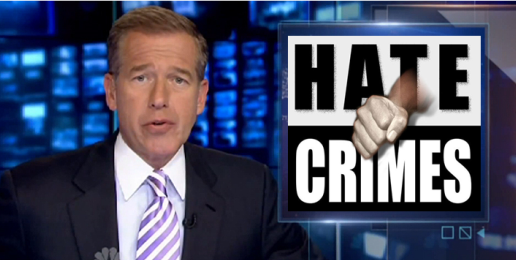 So much for taking America’s “fake news” problem seriously.

Ever since Donald Trump was elected president, there’s been an abundance of hand-wringing over the “fake news” that supposedly is rampant on social media.

Yet missing has been any kind of serious searching among the mainstream media about whether it could learn any lessons from this election—and whether reporters and editors are holding themselves accountable to their supposed values of objectivity and rigorous reporting.

And a new “study” presents Exhibit A as to why the mainstream media should reconsider its own practices.

The Southern Poverty Law Center—an organization that calls the Family Research Council an “extremist group” because of its socially conservative views on LGBT matters—reported Nov. 29 that “in the 10 days following the election, there were almost 900 reports of harassment and intimidation from across the nation.”

“Many harassers invoked Trump’s name during assaults,” the report continued, “making it clear that the outbreak of hate stemmed in large part from his electoral success.”

“The 867 hate incidents described here come from two sources—submissions to the #ReportHate page on the SPLC website and media accounts,” the SPLC report states. “We have excluded incidents that authorities have determined to be hoaxes; however, it was not possible to confirm the veracity of all reports.”

In other words, who has any idea if these incidents actually happened or not?

Yet, the fact that there was no verification of these incidents didn’t stop the media from covering this “study.”

And let’s not pretend there’s no to very little chance that a Trump opponent would make up a hate crime story.

Just consider this reported hate incident in November: “The men used a racial slur, made a reference to lynching, and warned him this is Donald ‘Trump country now,’ according to the report he gave police,” reported the Boston Herald.

Yet the man wasn’t telling the truth. The Herald reported that Kevin Molis, police chief of Malden, Massachusetts, said “it has been determined that the story was completely fabricated.”

“’The alleged victim admitted that he had made up the entire story,’ saying he wanted to ‘raise awareness about things that are going on around the country,’” the newspaper added, continuing to quote Molis.

Maybe 10,000 did—and most of them were directed at Trump supporters, not opponents. (Let’s not forget the man beaten in Chicago while someone said, “You voted Trump.”) Who knows?

The SPLC should realize that playing around with facts is no laughing matter.

In 2012, a gunman entered the headquarters of the Family Research Council “with the intent to kill as many employees as possible, he told officers after the incident,” reported Politico. The 29-year-old man, identified as Floyd Lee Corkins II, did shoot and wound a security guard. His motivation?

Ultimately, regardless of what the Southern Poverty Law Center does, the media shouldn’t be giving a platform to faux studies like this.

But maybe it’s not surprising, given attitudes like President Barack Obama’s. In an interview with Rolling Stone magazine published Tuesday, the president griped about the reach of Fox News Channel—and then complimented Rolling Stone: “Good journalism continues to this day. There’s great work done in Rolling Stone.”

Yes, that Rolling Stone—the news outlet that published the completely discredited University of Virginia gang rape story. In early November, “jurors awarded a University of Virginia administrator $3 million … for her portrayal in a now-discredited Rolling Stone magazine article about the school’s handling of a brutal gang rape [at] a fraternity house,” the Associated Press reported.

It’s tough to hold the media accountable when even the president seems willing to brush aside true instances of fake news.

Katrina Trinko is managing editor of The Daily Signal and a member of USA Today’s Board of Contributors.

This article was originally posted at The DailySignal.com

Donald Trump, the Media, and the Principle of ‘Don’t Trust, Verify’

Hatred Animates the Left
b
a
x
r