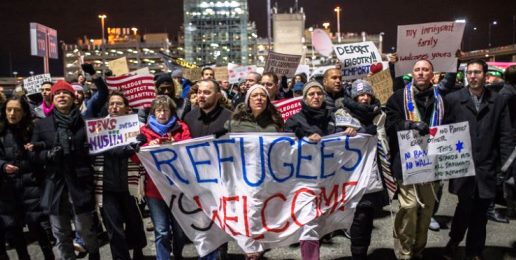 The liberal news media, which is ever more resembling a communications arm of the Democratic Party, has been determined to portray President Donald Trump’s immigration Executive Order as over-reach, inhumane, and anti-Muslim.

It is not new that American consumers of the news media should be wary of the daily narrative, but the need for it increases daily as nearly every step taken by the Trump Administration is going to be picked apart and pilloried on a daily basis.

The good news is that new media outlets are growing their reach, and old stalwarts like the National Review Online continue to produce a ton of material correcting the record whenever it is necessary. And since President Trump took office just weeks ago, a lot of correcting has been needed.

There is no better example of a need to correct the record is President Trump’s Executive Order ordering a 90-day halt to immigration from seven Muslim-majority countries: Iran, Iraq, Libya, Somalia, Sudan, Syria, and Yemen. Why those seven and not the other 44 other Muslim-majority countries and territories? Because they are hotbeds of militant Islam, as even Obama conceded labeling them “countries of concern.”

What is in the Executive Order and why is being portrayed as almost a crime against humanity? We all know the answer to the second question — it is because many Democrats and Leftists and supporters of open borders see any limits as problematic.

What about the first question — what is in the Executive Order? Here is David French writing at National Review:

Second, the order imposes a temporary, 90-day ban on people entering the U.S. from Iraq, Syria, Iran, Libya, Somalia, Sudan, and Yemen. These are countries either torn apart by jihadist violence or under the control of hostile, jihadist governments.

The ban, French writes, “is in place while the Department of Homeland Security determines the ‘information needed from any country to adjudicate any visa, admission, or other benefit under the INA (adjudications) in order to determine that the individual seeking the benefit is who the individual claims to be and is not a security or public-safety threat.’”

French notes that the ban has an “important exception”:

‘Secretaries of State and Homeland Security may, on a case-by-case basis, and when in the national interest, issue visas or other immigration benefits to nationals of countries for which visas and benefits are otherwise blocked.’ In other words, the secretaries can make exceptions — a provision that would, one hopes, fully allow interpreters and other proven allies to enter the U.S. during the 90-day period.

David French, noted for his role as a “Never Trumper,” also writes:

To the extent this ban applies to new immigrant and non-immigrant entry, this temporary halt (with exceptions) is wise. We know that terrorists are trying to infiltrate the ranks of refugees and other visitors.

“Unless we want to simply accept Muslim immigrant terror as a fact of American life,” French adds, “a short-term ban on entry from problematic countries combined with a systematic review of our security procedures is both reasonable and prudent.”

Reasonable and prudent? Seems so when even Syria’s brutal dictator Bashar Assad says that there are “definitely” some terrorists among the refugees.

A final note of interest. Thomas Gallatin writing at Patriot Post in an article titled, “Behind the Immigration Ban Hysterics: Trump’s travel ban on foreigners is not what the Left claims it is,” writes:

[T]he order will seek to revamp the refugee processing in order to prioritize those of minority religious groups fleeing the persecution of radical Islamists. This will specifically help Christians but also other minorities who have suffered from rising persecution over the last few years. This is a significant change from Obama’s policy that did not favor minority religions in the refugee processing.

Here are a few related articles:

First up is Dr. Michael Brown answering the question “”Is Trump’s executive order on the refugees fundamentally unChristian, or is it being misreported by the media?”

Next, for information on the legal challenge to the Executive Order, read Hans von Spakovsky’s article
“Trump’s Executive Order on Immigration Is Both Legal and Constitutional” at the Heritage Foundation website.