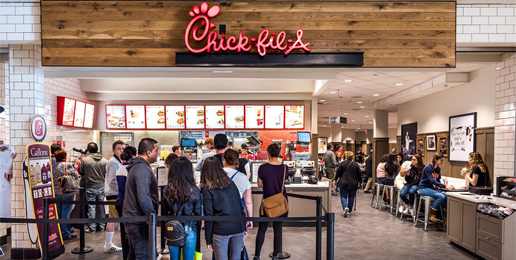 This was the tweet from the Toronto Star that left every rational mind who saw it shaking their head in disbelief: 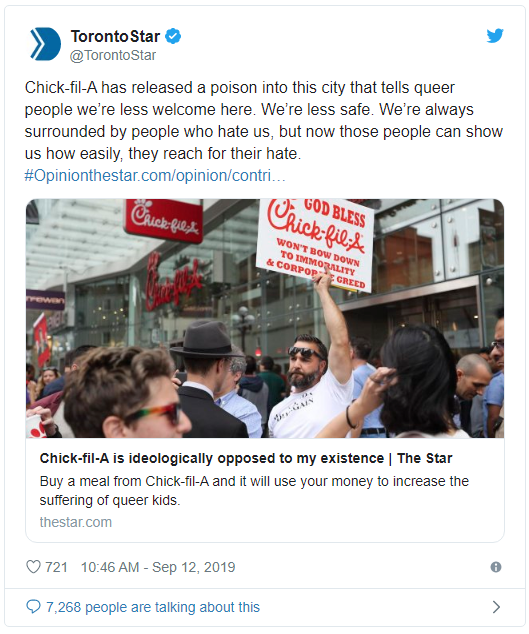 Everyone has a cause they’re passionate about. Everyone has convictions that they embrace and opinions they feel strongly about. But this? This is just crazy. It’s nuts. It’s so separated from reality it almost defies logic how (1) a person capable of functioning in civil society could come to these conclusions, and (2) how a news publication lacks the editorial discretion to politely say, “We’re going to pass on this one.”

Chick-fil-A is a fast food restaurant that serves, employs, pays, and offers benefits to people who consider themselves gay, queer, lesbian, bi, and any other sexually-specific identity a person wants to claim. They do not discriminate, they do not show partiality or prejudice. They sell chicken sandwiches in clean restaurants (except on Sundays).

What irks people (like the author of this dangerously disturbed piece in the Toronto Star) is that the owners of Chick-fil-A are Christians who personally hold to a belief in the Christian sexual ethic. That’s literally it: the owners of the restaurant chain are Christians who strive to honor God and live in obedience to His word. That obedience means promoting God’s plan for human flourishing, which is why not only do the owners of Chick-fil-A believe God’s guideposts on sexuality are to be honored, but also His desire for us to serve one another, to love one another, and to do all things (even making and selling chicken sandwiches) as though we are working for God Himself and not for man.

That such a perspective engenders such outraged, maniacal hatred from left-wing sexual activists really says a lot about the heart and goodwill of those activists.  Consider, you will not see Chick-fil-A tweeting from their social media account their disdain for queer people. But you will see those “queer activists” tweeting and publishing hate pieces maligning and libeling Chick-fil-A for pretended offenses.

And while it’s abundantly clear that the attacks on Chick-fil-A have, and continue to backfire spectacularly (this piece details how the fast food leader has doubled their sales since activists demanded a boycott of their stores), nobody should pretend the cultural assault being waged against the business is healthy or acceptable.

If anyone is releasing “poison” into our cities, wouldn’t that distinction belong to the ones who refuse to do business with those who hold religious convictions different than their own?

Aren’t the architects of hatred those who would prefer to reach for their keyboards to type words of discontent, conflict, and contempt rather than seek to know, appreciate, and grant the benefit of the doubt to their neighbors?

At some point our culture is going to have to grapple with the undeniable reality the merchants of hatred aren’t the people wiping off our tables and saying, “my pleasure.” They’re the ones standing outside picketing and protesting that kind service.