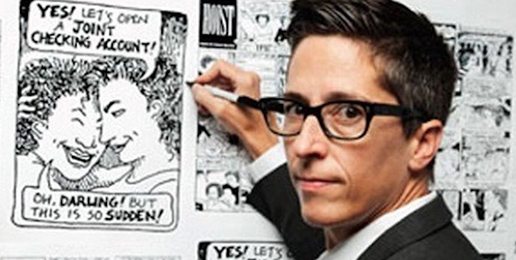 I read with amusement a recent Chicago Tribune article about writer Salman Rushdie’s appearance at the Chicago Humanities Festival in which he “railed against censorship.” When asked about censorship, Rushdie waxed irritated about some Duke University students who chose not to read the book selected by the university for all incoming freshmen: Alison Bechdel’s comic book graphic memoir Fun Home: A Family Tragicomic. They refused to read it because of its graphic depictions of sexuality which conflict with their religious beliefs.

It’s remarkable that the example that pops into Rushdie’s mind when asked about censorship is of conservatives choosing not to read a novel when the preponderance of censorship found within academia (and public middle and high schools) is perpetrated by “progressives” who censor conservative resources.

Rushdie pontificated that students who chose not to read Bechdel’s memoir don’t belong at elite universities:

Those who believe Bechdel’s ugly, unwise book belongs in academia, a place which  should be committed to fostering that which is good, true, and beautiful, are lost in spiritual darkness.

Rushdie has a novel understanding of “censorship.” Freely choosing not to read a text that professors—likely Leftist professors—have selected is now censorship. Censorship more commonly understood refers either to prohibiting the publication of a text or refusing to allow it to be read. Censorship is not commonly understood as the voluntary choice not to read a text. Judiciousness and free choice are recast as censorship.

Once again liberals redefine a term to serve their arrogant desire to impose their beliefs on everyone. Read whatever tripe “progressive” professors assign or they will mock you as a censor. Condescension is the last refuge of presumptuous, dogmatic, moralistic scoundrels.

If professors did choose conservative resources, they would be obliged to provide censorious trigger warnings in advance to avoid giving the vapors to delicate “progressive” students. And then, those students would engage in Rushdie’s form of censorship in order to avoid the trauma of microaggression.

High schools now teach Rent, The Laramie Project, The Book of Mormon, Angels in America: A Gay Fantasia on National Themes, and The Perks of Being a Wallflower, and yet I have not heard of a single high school having students read, for example, essays or books written by conservative scholars on the nature and morality of homosexuality or marriage. Could that be considered censorship?

Is the free choice not to immerse oneself in a book that presents perversion positively and includes obscene images that violate one’s religious convictions ever justifiable in the incoherent philosophical universe of progressives? In their mad, mad, mad, mad world, do ideas have consequences?

This is not to say that Fun Home, which was made into Broadway musical and won a Tony award last May for Best New Musical, is utterly devoid of value. Through the depiction of her profoundly dysfunctional family, perhaps Bechdel has inadvertently offered insight into the environmental factors that may have contributed to her homoerotic attraction.

Partner with Illinois Family Institute as we continue to stand
on the front lines for marriage, family, life and liberty.