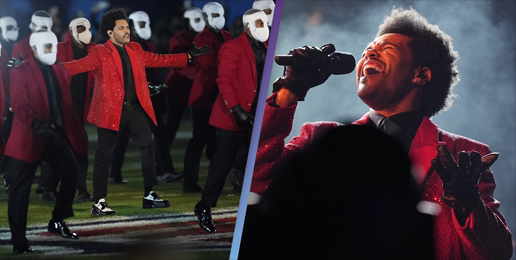 Leftists do not seek only to destroy, divide, cancel, and erase. They seek also to re-fashion a brave new world. A look at two recent cultural events reveals the kind of world with which leftists hope to replace cancelled America.

Sanctimonious leftists continually preach sermons about which ideas must be cancelled because they’re destructive and immoral. Apparently, those leftists think the Weekend is wholly undeserving of cancellation, because he never says anything destructive or immoral.

Her name is Tammy, she got hella bitches

Girl go ’head and show me how you go down

And I feel my whole body peakin’

And I’m f*ckin’ anybody with they legs wide

Got me higher than a ni**ga from the West Side

If anyone affirms sexual deviance, and the abuse, exploitation, and objectification of women, the left will definitely not cancel them. Instead, sexual libertines will be given the most colossal platforms leftists can find. And leftist ideological tyrants make sure those platforms are ones that children can access.

The second cultural event took place just two days before the Super Bowl when LA Times and Wired Magazine writer Virginia Heffernan wrote a condescending column in which she argues that even acts of unselfish generosity on the parts of Trump voters require nothing more than a begrudging smidge of appreciation. She defends her bitter intolerance as a legitimate response for the indefensible sin of voting for Trump:

The Trumpites next door to our pandemic getaway, who seem as devoted to the ex-president as you can get without being Q fans, just plowed our driveway without being asked and did a great job.

How am I going to resist demands for unity in the face of this act of aggressive niceness?

Of course, on some level, I realize I owe them thanks—and, man, it really looks like the guy back-dragged the driveway like a pro—but how much thanks?

Heffernan’s answer is suggested in her question. She plans to respond minimally:

[w]ith a wave and a thanks, a minimal start on building back trust. I’m not ready to knock on the door with a covered dish yet.

I also can’t give my neighbors absolution; it’s not mine to give. Free driveway work, as nice as it is, is just not the same currency as justice and truth. To pretend it is would be to lie, and they probably aren’t looking for absolution anyway.

But I can offer a standing invitation to make amends. Not with a snowplow but by recognizing the truth about the Trump administration and, more important, by working for justice for all those whom the administration harmed. Only when we work shoulder to shoulder to repair the damage of the last four years will we even begin to dig out of this storm.

In the grimy hands and bendy minds of oily leftists, justice and truth are slippery concepts. Many Trump voters think, for example, that men can’t be women, and that falsifying birth certificates or referring to “Caitlyn” Jenner by female pronouns are acts of lying. And many Trump voters believe allowing biological men—also known as men—to compete in women’s sports is manifestly—or womanifestly—unjust.

Heffernan is right on one point, though. Absolution isn’t hers to give, and Trump voters owe her nothing. If attempts to “make amends” and to work for “justice”—as defined by leftists—are “unity” prerequisites, then there will be no unity in America. But we already knew that.

What do we do about the Trumpites around us? … Americans are expected to forgive and forget before we’ve even stitched up our wounds. Or gotten our vaccines against the pandemic that former President Trump utterly failed to mitigate.

My neighbors supported a man who showed near-murderous contempt for the majority of Americans.

Are the 74 million Trump voters expected to forgive and forget the leftists who showed near murderous contempt for all the Americans who lived in terror as their cities and businesses were burned and looted, and police officers spit at and beaten?

Are Trump voters expected to forgive and forget before they’ve even stitched their lives back together?

Are Trump voters expected to forgive and forget the shabby way President Trump and Melania Trump were treated by the bigoted, partisan press since the moment President Trump was elected?

Are Trump voters expected to forgive and forget the millions of tax dollars spent on the Russian collusion hoax and two impeachment trials—including the one that Chief Justice John Roberts refuses to preside over?

Are Trump voters expected to forgive and forget the way Associate Justice Brett Kavanaugh was treated by Democrats?

Are Trump voters expected to forgive and forget the way the press covered for the corrupt Joe Biden during his invisible campaign?

Are Trump voters expected to forgive and forget that leftists have given Trump little to no credit for Operation Warp Speed?

Apparently, leftists have little understanding that Trump voters view the beliefs of leftists—particularly on matters pertaining to sexuality and marriage—as evil and destructive as leftists view conservative beliefs.

Leftists that control Big Tech, big business, our professional medical and mental health organizations, public schools, secondary schools, the mainstream press, and the “arts,” do not support diversity of ideas. They do not value tolerance for beliefs they hate. They do not love liberty for deplorables, ugly folks, and theologically orthodox Christians.

And despite all their prior opposition to “imposing morality,” leftists are now firmly committed to imposing their morality—including on other people’s children using taxpayer money.

The beauty of America used to be that, recognizing the diversity of ideas and beliefs, Americans were committed to allowing the free flow of ideas and robust debate. The notion that a ruling class could declare that their presuppositions would enjoy unencumbered public expression and that all dissenting views would be banned was unthinkable.

It was this freedom that made America a refuge for oppressed people around the world, and as leftists deracinate this freedom, America becomes an oppressive place to live for millions of Americans. Increasingly, the only freedom valued by those who rule America is the freedom for unrestrained sexual deviance to destroy hearts, minds, bodies, souls, families, churches, and the First Amendment.