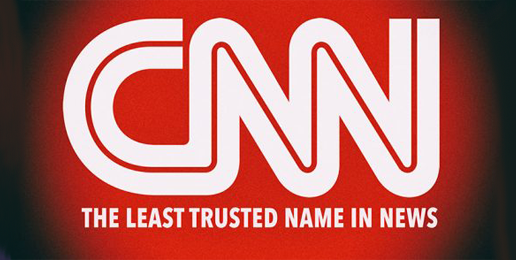 How he managed to say it without choking on his own tongue I will never know. As President Trump began to dress down the hostile press that was attempting to use his Monday White House briefing to smear him as negligent, CNN cut away immediately to anchor John King who managed to prattle out these words without even a sniff of irony:

“To play a propaganda video at taxpayer expense in the White House briefing room is a new — you can insert your favorite word here – in this administration.”

For anyone at CNN to feign objection over “propaganda” is as convincing a testimony you will ever see to the staggering lack of self-awareness capable by seemingly coherent human beings.

This is, after all, the network of Jake Tapper, who just days ago allowed socialist Alexandria Ocasio-Cortez to repeat without correction the now widely debunked rumor that President Trump called coronavirus a hoax. Tapper actually defended his own silence saying that while he knew it was a lie, he let it slide by because President Trump lies about other things. Seriously:

I guess that’s the problem with a politician who lies so often; while I agree that Democrats are mischaracterizing what he said, what he did say was also false so it’s tough to justify taking the time for a fact check when it’s not taking a stand defining the truth.

Tapper also allowed Democrat Speaker Nancy Pelosi to accuse Trump of “fiddling” without ever holding her to account for “fiddling” herself when she single-handedly delayed the coronavirus relief bill for a week.

This is the network of Brian Stelter who anchors a program unironically called “Reliable Sources,” and utilizes that platform to peddle misinformation on behalf of the Democrat Party:

I RT’ed a former LA Times reporter who had tweeted pics that mistakenly ran on the ABC local news broadcast. When I found out the story was erroneous, I deleted the tweet. Gosh, Brian, why does your tweet omit the MSM error that started it? Or does CNN only exist to attack GOP? https://t.co/ehvPHPMrGh

It is also Stelter who turned disgraced lawyer and convicted felon Michael Avenatti into a mainstay on his program in order to attack Trump, and even encouraged the Stormy Daniels attorney to think about running for president himself. With Avenatti in jail now, Stelter fills his time regularly attempting “gotcha” moments with President Trump that end just about as well. Like this:

Admin officials "say the White House has made a deliberate political calculation that it will better serve Trump’s interest to put the onus on governors — rather than the federal government — to figure out how to move ahead."

Let that quote sink in… https://t.co/v2QVZBXslD

Yes, let it. Because there’s a name for the concept articulated in that quote, of course. It’s called “federalism,” the central pillar around which our constitutional order and system is constructed. Let the fact that CNN’s chief media corresponded didn’t realize that sink in for a minute.

Besides, it isn’t too difficult to figure out what Stelter and company would be saying if Trump had seized power and claimed emergency authority to dictate nationalized policies to “move ahead.”

This is the network of Don Lemon, an activist masquerading as a newsman who is so sharply partisan that long-time journos cringe at the damage he continues to do not only to CNN’s credibility, but the industry itself.

This is the network that breathlessly covered every potential angle of every perceived accusation against U.S. Supreme Court Justice Brett Kavanaugh during his confirmation hearings, yet now remains the only major news organization that has not even mentioned the credible allegations of sexual misconduct leveled against presumptive Democrat presidential nominee Joe Biden by one of his former employees.

This is the network that at the very same press briefing that John King couldn’t bear to air another second of, allowed a staffer manning the chyron machine to post these on-screen Democrat talking points with the apparent blessing of both editors and producers:

I’m almost impressed with how hard the CNN chyron writers of my former network effort to get their revulsion for Pres Trump just right!

I don’t miss it… pic.twitter.com/FLQr2Nwz8a

Incredible. As in, lacking in all credibility.

After recently surviving a bout with COVID-19, CNN host Christopher Cuomo made some startling remarks, indicating that he was re-evaluating his career at the network. Among other things, Cuomo called out CNN for trafficking in “ridiculous things.”

He not wrong in that assessment, even though I’d choose a different, more precise term for what this low-rated televised rumor mill peddles: propaganda.