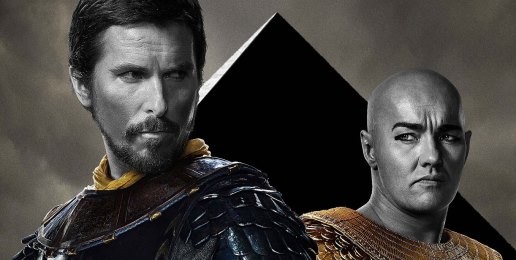 Timed for a Christmas season release, director Ridley Scott’s intended blockbuster, Exodus: Gods and Kings hit the big screens this past weekend. On its opening weekend the movie shot to the top of the box office charts, displacing the latest Hunger Games movie, but falling considerably short of expected receipts.

The best single line analysis of the movie and its failure to garner either critical acclaim or more viewers was offered by Eric D. Snider of GeekNation: “This big dud isn’t blasphemous enough to be outrageous, emotional enough to be inspiring, or interesting enough to be good.”

Well, I partly agree with the first two points of criticism, but I did find the movie interesting. Indeed, I even liked much of the movie, and I would not argue that mature and thoughtful Christians should not see it, even if the concerns about it are major. And make no mistake, the concerns are major.

Earlier this year, director Darren Aronofsky offended the faithful with his distorted depiction of Noah. Aronofsky’s Noah offered a portrait of Noah as a crazed homicidal maniac who hallucinated God’s will after drinking a potion given to him by Methuselah. Humanity itself is depicted as a blight upon the earth and the director himself bragged that his movie was “the least Biblical biblical film ever made.”

Ridley Scott’s Moses is not in the same category, largely because there are so many details of the Exodus narrative in the Bible with which the director simply had to deal. There are no Transformer-like invented creatures in Moses, and many of the film’s scenes and details are explicitly true to the biblical text. Indeed, Scott’s presentation of the ten plagues God brought against Egypt is spellbinding — far more moving than the same scenes as depicted in Cecil B. DeMille’s famed The Ten Commandments. The last plague, the death of first-born sons, is absolutely riveting and deeply emotional.

Critics are piling on. Film critics tend to be rather eccentric sorts and some of them seem almost impossible to please. As a general rule, critical acclaim and popularity with the public are not directly related. Some of the concerns are quite legitimate, however. Public Radio International published a review noting that “Hollywood Has a Race Problem.” Virtually all of the leading roles are played by white actors, even though the ancient Egyptians were certainly not caucasian. As PRI noted, “Ramses, the Egyptian pharaoh who enslaved the Jews in the Old Testament, is played by a white actor. In fact, the entire lead cast of ‘Exodus: Gods and Kings’ is white. Moses is white. Moses’ mother is white. The Egyptian prince is white. The African queen is white, too.”

Not only are they all white, the central characters speak as though they were educated at Oxford or Cambridge. This is rather typical of Ridley Scott’s films, with gravitas presumably added by a British accent. Needless to say, the skin tones and accents do not match the actual story.

But that fact points to an even more troubling dimension of the movie. The entire narrative does not match the actual story. It fails as a whole even more than it fails in its parts.

What is missing is the very point of the Exodus in biblical history and theology. What is missing is the truth that God acted in history in faithfulness to the covenant he had made with Abraham, rescuing Israel from captivity in Egypt. In Ridley Scott’s version, God is actually hidden from view, along with his purposes, motivations, and character. In his place we see an 11 year old boy who appears to Moses as a theophany, or divine appearance. God’s presumed words flow from the mouth of a small boy, who appears as something of an unmoved Mover in the film’s narrative.

As for Moses, the depiction offered by actor Christian Bale grounds Moses’ sense of divine call in a severe knock to the head from a rock, followed by what might well be a hallucination, with the 11 year old boy speaking to Moses beside the bush that burned but was not consumed. Completely missing from the portrayal is any explanation that God has chosen Moses as his instrument for bringing Israel out of captivity and that God was acting in faithfulness to the covenant made with Abraham. Moses appears as a tribal chief, a cunning general and killing machine, rooted in what Scott presents as Moses’ experience as a great general during his life as a prince of Egypt. Moses never seems to understand a divine purpose beyond his military exploits, and his relationship with God is troubled, to say the least.

It must be said that Moses’ relationship with God in the Bible is also troubled, to say the least. After all, Moses is not allowed by God to lead the children of Israel into Canaan. Nevertheless, the Bible steadfastly presents Moses within the context of his calling and his calling within the context of covenant. The movie leaves viewers with a depiction of Moses, riding alongside what must be the ark of the covenant, as Israel moves on from the parting of the Red Sea. But the ark is never identified, nor is the covenant.

The problems with the film could be anticipated, given the rather remarkable statements made by both Ridley Scott and Christian Bale, even before the movie’s release. Ridley Scott made clear that he did not believe that Moses had ever lived and that the Exodus account was not to be taken as historically true. He told Religion News Service that he looked at the film much as he looks at science fiction. “Cause I never believed in it, I had to convince myself every step of the way as to what did make sense and what didn’t make sense and where I could reject and accept. And therefore I had to come to my own decisions and internal debates.”

Accordingly, Scott presents the plagues and miracles as non-supernatural events with a naturalistic explanation. Unlike Cecile B. DeMille, Scott offered no version of a supernatural miracle at the Red Sea. He described his dilemma: “So I have to part the Dead Sea and I’m not going to part the Dead Sea because I don’t believe it. I don’t believe I can part the Dead Sea and keep shimmering water on each side. I’m an absolutely very, very practical person. So I was immediately thinking that all science-based elements placed come from natural order or disorder–or could come from the hand of God, however you want to play that.” Presumably, Scott meant Red Sea, not Dead Sea.

Well, Ridley Scott played it all in naturalistic terms, or at least he did his best to do so. The most interesting aspect of the film in this respect was the role played by a nervous vizier in service to Ramses, who did his best to offer a strictly naturalistic explanation for the succession of plagues. The vizier appears as an ancient demythologizer, offering natural explanations involving red clay in the Nile and a complicated series of basically environmental plagues that followed. Those explanations would be familiar to anyone versed in the liberal biblical scholarship of the last two hundred years. In Scott’s version of the story, the real story at the Red Sea was the receding of the waters due to a tsunami after an earthquake.

Despite himself, however, Scott’s depiction of the plagues appears quite supernatural indeed — especially the final plague, the death of first-born sons. Scott’s anti-supernaturalism utterly fails him on the final plague, and he does not flinch from presenting the horrifying divine judgment on the defiant Egyptians. The film’s scenes of dead and dying Egyptian boys and young men is deeply moving. By that point in the film the demythologizing vizier has been hung by a frustrated Ramses, and no character attempts to offer a “natural” or “scientific” explanation of the last plague.

The portrayal of Moses as a tribal warrior was explained by actor Christian Bale, who told ABC’s Nightline program that Moses, in his view, was “one of the most barbaric individuals that I have ever read about in my life.” Christian Bale may not read much, but those words betray his conception of Moses as quite different from anything found in the Bible. Where did he get his information about the “barbaric” Moses? Actually, in that conversation with Nightline and in other interviews, Bale revealed the real issue. Like Ridley Scott, he assumes a strictly non-supernatural storyline. Christian Bale’s comments indicate that he seemingly places the responsibility for the plagues at the hands of Moses, not God. Even so, in the film the 11 year old boy expresses frustration with Moses’ slow progress toward liberation and tells him to “watch” as he sets the plagues in motion.

The film has put the question of the historical Moses on the table of public conversation. In the Guardian, Andrew Brown declared: “There is no historical character of Moses, and no reason from archaeology or history to suppose that any of the exodus story is true.”

“Since the central rite of Jewish identity is the Passover festival, which commemorates the moment that Moses freed his people from slavery in Egypt, the absence of evidence outside the Bible story is potentially embarrassing, says Rabbi Laura Janner-Klausner, who leads Reform Judaism in this country [Britain]: ‘When I heard for the first time that the exodus might not have happened, I did want to weep … then I thought, what does this matter? You have to distinguish between truth and historicity.’”

That is the great claim of liberal theology — that we must “distinguish between truth and historicity.” Brown’s article goes on to cite several Jewish authorities as arguing that it really does not matter to Judaism if Moses never existed. Brown even cited one Orthodox rabbi who argued that it was the giving of the law that had to be historical, not Moses. Brown also noted that Orthodox Judaism requires a belief that Moses wrote the first five books of the Bible, leading to the obvious question of how we can have Mosaic authorship without Moses. One may presume that other authorities in Orthodox Judaism would disagree with the cited rabbi.

In any event, the fact remains that, even if the historical Moses is not central to contemporary Judaism (by at least some accounts), the historical Moses is vital and essential to Christianity. Moses is a central character in the Bible’s narrative of Israel and the metanarrative of the Gospel itself. Jesus is the new Moses, leading his people out of captivity to sin. Moses is the divinely commissioned lawgiver. Christ Jesus is the divine Savior who perfectly fulfills the law and redeems sinful humanity. The Bible clearly presents the Exodus as history, and the history of Christianity is built upon that historic foundation.

As a film, Exodus: Gods and Kings is a mixed bag. I was deeply moved by parts of the film, and puzzled or troubled by others. But, in the end, perhaps the best way to understand Ridley Scott’s Moses is to put it in the context of Scott’s own comments. He told Religion News Service: “Any liberties I have taken in terms of how I show this stuff was, I think, pretty safe ground because I’m always going always from what is the basis of reality, never fantasy . . . . So the film had to be as real as I could make it.”

As real, in other words, as Ridley Scott’s version of “this stuff” could be presented “from what is the basis of reality” as Ridley Scott defines reality. What we see in the film is Moses without the supernatural. In his own words, that’s how he decided to “play” it.

It turns out that the real vizier is none other than Ridley Scott.