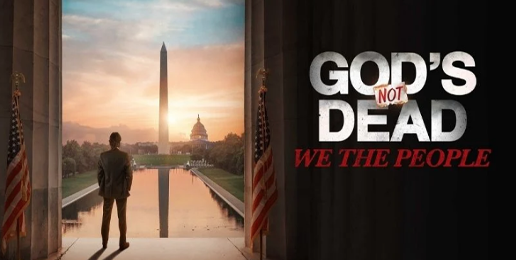 “God’s Not Dead: We the People,” the latest installment in the popular “God’s Not Dead” franchise, offers a powerful reminder to viewers: the importance of human freedom.

“[The central message of the film is] a reminder that the life we have in America is pretty darn good and a reminder of the freedoms that enable such a life,” Vance Null, the film’s director, told Pure Flix Insider. “And, ultimately, a reminder of the price that was paid for the ultimate freedom we have in Jesus.”

GET TICKETS: SEE ‘GOD’S NOT DEAD: WE THE PEOPLE’ AT THE THEATER

Null, who played important roles in the previous three films before going on to direct the fourth installment, is excited to bring these powerful messages to audiences.

“These films have always been relevant to the times,” he said, “So I was most interested in discovering together with my cast and crew where the next chapter of the story would take us: Washington, D.C.”

Like each of the “God’s Not Dead” films before it, “God’s Not Dead: We the People” is unique. The first installment in the franchise tackled college campuses, the second explored high school and the third dove into the role of faith in the local community.

This film deals with a related yet untouched subject in the series: homeschooling. Null revealed that the original plan was to tackle homeschooling in the third film, though producers chose a different direction for that movie.

“The homeschool plot was actually central to the story before I came onboard. The first script was penned by Chuck Konzelman and Cary Solomon, and had actually been written to be the third film,” Null explained. “As you might guess, ‘God’s Not Dead: A Light in Darkness’ (the third in the series) took a different turn.”

Null worked with writer Tommy Blaze to update the “God’s Not Dead: We the People” script — and that’s when they realized they wanted to go broader than just the homeschool storyline.

“We wanted to make things bigger than that — and raise the stakes by taking our characters to Washington, D.C., to not only defend their right to homeschool and raise their children as they see fit, but also to realize that this was just one of many freedoms potentially at stake unless they actively worked to defend and preserve them.”

As for Null, he’s grateful to be able to create powerful stories with the team behind “God’s Not Dead,” noting that he is getting to “live my dream.”

Null’s favorite part of filmmaking, he said, is working with the actors.

“Truthfully, I was a bit nervous about stepping on set to work with such a large cast,” he said. “But I soon discovered that this was my favorite part about the filmmaking process — crafting a story with talented people who embody their characters, and ultimately bringing an imaginary world to life.”

Find out more about “God’s Not Dead: We the People” tickets here.

This article was originally published at PureFlix.com.