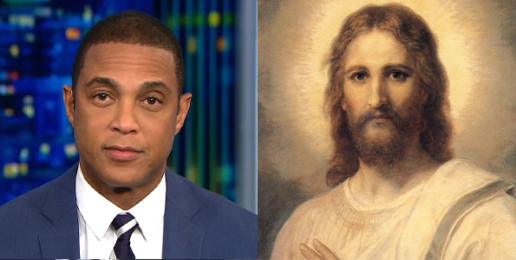 Remember last July when CNN’s homosexual “journalist” Don Lemon said, “Here’s the thing, Jesus Christ—if … you believe in Jesus Christ—admittedly was not perfect when he was here on this Earth”? Apparently, Lemon forgot these verses about Jesus:

For our sake he made him to be sin who knew no sin, so that in him we might become the righteousness of God.

You know that he appeared in order to take away sins, and in him there is no sin.

He committed no sin, neither was deceit found in his mouth.

For we do not have a high priest who is unable to sympathize with our weaknesses, but one who in every respect has been tempted as we are, yet without sin.

Well, Lemon’s at it again—that is, demonstrating his biblical ignorance. This time, in response to a question from Meghan McCain about the Vatican saying it won’t bless same-sex unions, Lemon responded,

The Catholic Church and many other churches really need to reexamine themselves and their teachings because that it not what God is about. God is not about hindering people or even judging people. … I would say to the pope and the Vatican and all Christians and Catholics … go out and meet people and try to understand people and do what the Bible and what Jesus actually said—if you believe in Jesus—and that is to love your fellow man and to judge not lest ye be not judged.

Yes, he said that—all of it. Why, oh, why does someone so biblically ignorant pontificate repeatedly on Christianity?

For the umpteenth time, God judges both people and actions. While God loves his creation, he hates many things that his fallen creatures believe, desire, and do. We learn that in Scripture. We learn too that Christians are to discern properly and to discriminate—that is, judge—between right and wrong actions. We learn that we are to “judge with righteous judgment,” to “expose the unfruitful works of darkness,” and to “declare the whole counsel of God.” God instructs individuals, church bodies, and civil authorities repeatedly to make judgments regarding right conduct.

We also learn in the Old Testament that God does, indeed, hinder and judge people. And as we learn throughout Scripture, God will judge us all.

The words of Jesus that Lemon attempted to quote, Matthew 7:1, “Judge not, that you be not judged,” are often misunderstood, misused, or abused by those who affirm homoeroticism as good. This admonition from Jesus means several things. What is does not mean is that Christians are prohibited from making distinctions between right and wrong acts. This verse means that,

1.) Fallen humans should not presume to judge the hearts of others,

2.) We are not to presume to know who is saved and who is not, and

3.) We are not to condemn hypocritically a sin in which we ourselves engage. We’re to recognize the universality of sin and offer forgiveness as we have been forgiven.

It’s absurd to claim that the Bible prohibits Christians from making statements about what constitutes moral conduct (i.e., to judge). Neither Lemon nor anyone other than sociopaths believes people should refrain from making moral judgments. Lemon and his ideological allies regularly judge the beliefs, feelings, words, and deeds of others. Has he ever watched CNN?

With pomposity, scorn, and nastiness, leftists regularly judge theologically orthodox Christians. If Christians believe what God’s Word says about sexuality, they are called ignorant, intolerant, hateful bigots—or worse. If “judging people”–in the sense of judging the beliefs, feelings, and acts of people–is wrong, as Lemon says it is, then Lemon and other leftists shouldn’t be judging and condemning Christians as “homophobes” and “transphobes.”

Every civilized human makes judgments every day between right and wrong actions. When Rev. Martin Luther King Jr.—to whom Lemon referred favorably—condemned racism, he was judging. When he said the church was “blemished and scarred” by racism and rendered “weak” and “ineffectual,” he was judging. There is no mistaking that Rev. King heartily endorsed judging. In “Letter from Birmingham Jail,” Rev. King wrote,

Homosexuality in the Catholic Church
b
a
x
r